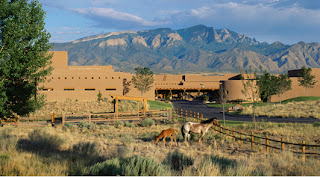 The New York Times just reported on a conference for "university, school, and hospital officials" with an interesting feature. Potential vendors to these institutions were charged very pricy registration fees that guaranteed them one-on-one access to particular officials. In the words of the Times reporter Alan Finder,

The setting for a conference of university, school and hospital officials could not have been more luxurious: a resort in the high desert north of Albuquerque, with a championship golf course, swimming pools, a spa and views of distant mountain peaks.

And for companies wanting to do business with the 200 or so officials attending the gathering, the Sustainable Operations Summit, there was an added benefit.

For $18,500, a vendor was guaranteed 15 one-on-one sales meetings with officials at the conference, held here in June. A company that sent two representatives paid $25,500, with each promised 15 private sessions. The university officials and others who were attending were told flatly that they were required to go to the meetings.

'We’re just organizing an opportunity and a format to encourage discussion and relationships among people,' said Craig Lehmann, a co-founder of the company that organized the event.

CraigMichaels Inc., ... created the sustainability summit. CraigMichaels essentially borrowed the format, which is used by a number of companies promoting conferences that link corporate executives with companies wanting to sell them goods and services, and expanded it to universities and schools.

A year ago, the online publication Inside Higher Ed raised questions about the ethics of the format. But the company has continued its conferences, and many university officials still attend.

The sustainability conference here at the Hyatt Regency Tamaya Resort & Spa, where Al Gore was one of the featured speakers, mixed university, school district and hospital officials who paid roughly $1,000 for three days.

The company gave conflicting accounts of how many half-hour meetings with businesses each official had to attend. Mr. Lehmann, the company president, said at least five were required. Michael P. Owens, the company’s director of production, said there was no minimum number, although people were asked to attend more than one or two.

Each participant was asked beforehand to select at least 10 companies out of the 29 at the event with which he or she would be willing to meet. Vendors were asked to do the same, and CraigMichaels officials then matched them up.

The company’s employees, dressed in blue polo shirts with a CraigMichaels logo and communicating with each other via tiny microphones and earpieces, made sure with a gentle insistence that attendees kept their appointments with the companies, which were promoting solar power or environmentally sensitive roofing, lighting, and heating and cooling systems.

'Why would you let a third party trade on your name and your office?' said Barmak Nassirian, an associate executive director of the American Association of Collegiate Registrars and Admissions Officers. 'I really would have to question if it’s ever appropriate for a third party to charge a fee for an appointment with me.'

Richard A. Hesel, a principal of the Art & Science Group, a marketing consultant to colleges, put it more bluntly: 'This is a form of trying to buy influence. People are paying for access.'

But Susan Jurow, a senior vice president of the National Association of College and University Business Officers, said she did not see a problem, so long as university officials paid to attend the events.

All of the university officials interviewed at the environmental conference saw it that way, too. 'It doesn’t bother me,' said Lisa Glover Henderson, director of energy initiatives at the University of Rochester. 'That’s part of the world we live in today. I don’t think there is a conflict.'

Although the Times article did not describe how many attendees were from health care organizations or had links to academic medicine, its web-site included a link to participant testimonials that included glowing words from an official of Boston University, whose Medical Campus includes the School of Medicine, and School of Public Health, and Presbyterian Healthcare Services, based in Alberquerque, NM. The senior vice president for hospital strategy and national facilities for the large not-for-profit managed care organization Kaiser-Permante delivered a talk, according to the organization's newsletter.

This story seems similar to that of the HRDI scandal (see post here). Once again, representatives of commercial firms that might want to do business with health care organizations (and universities and local governments) get enhanced access to officials who might be able to make purchasing decisions for a hefty fee. As Richard A Hesel said above, it appears to be "paying for access." There may be less polite words for it, but words more fraught with legal meanings.

As an aside, I can't figure out why the university, health care, and government officials would want to attend, given that attendance requires one-on-one sessions with prospective vendors, although maybe the setting was so luxurious that the $1000 registration fee seemed a bargain. But clearly there is reason to think that companies which paid for their representatives to meet academic and health care officials at this luxurious setting may have an inside track on selling goods and services to their organizations, regardless of the price or quality of those goods and services.

The impression created by this story is of academic and health care leaders who are part of a "power elite," attuned to luxuriating with their prospective vendors, but perhaps not to maximizing the resources needed for their missions of discovering and disseminating knowledge and caring for the sick.
Posted by Roy M. Poses MD at 4:34 PM

Today's WSJ, July 11, has this story, which also ties to a previous post, Campuses, Companies Cozy Up. The jest of the story is that Express Scripts is moving onto the University of Missouri at Saint Louis's campus in order to provide jobs in the community and redevelop surrounding blighted property.

While they openly recognize conflicts, they dismiss this due to the IT nature of the work involved. They also sight another university's relationship with BMW as precedent for this type of relationship.

One does not have to make a great leap to see a major drug company establishing a research center on the grounds of a willing university. The close proximity of staff and the large financial incentives will make unbiased testing impossible. The lure of a large pool of potential test subjects in a student body will only be a plus.

One has to ask: What mission is served, when financial gain is the only motive in education?