National Research Council: Current Approaches to Health IT Insufficient ... and Other "Master of the Obvious" News

(Jan 12 addendum: a prepublication pdf of the report itself is here.)

I reproduce the press release below, but please do read my polemic before reviewing it.

My early mentor, cardiothoracic surgery pioneer Victor P. Satinsky, M.D., used to become irritated when people or organizations presented views that qualified them as "Masters of the Obvious." I believe the following release by the highest scientific authorities in the land qualifies for such a categorization.

Sadly, the release by the National Research Council outlines the "what" (what is wrong), but not the "why." Perhaps that will be found in the full report, although many of the "whys" (that is, why these health IT problems exist at all, and why the Joint Commission and NRC reports are even necessary, after 40+ years of Biomedical Informatics, IT-sociology and other research) can be found right here on Healthcare Renewal.

On the positive side for clinicians, life as a typical hospital CIO or other non-medical executive may have just become substantially more aligned towards serving the needs of clinicians, via being compelled by this report and its aftermath to make major changes in the way HIT is pursued. These changes would replace the familiar pursuit of building self-serving IT empires.

In fact, if you're a CIO who is accustomed to doing typical deals with HIT vendors, hires typical business IT staff unknowledgeable and untried in anything medical to work in clinical IT, along with lots of ham-fisted but hats-in-hand consultants who then try to clean up the mess the IT staff make, and who bullies and brands with a scarlet letter anyone who challenges the status quo (such as Medical Informaticists and other cross-disciplinary specialists who actually know what they're doing in HIT) while the latter actually try to protect the "customers" also known as "patients", your life has just become a bit more challenging.

I'd thought the December 2008 Joint Commission Sentinel Event Alert on Health IT, on the risks posed by improperly designed and implemented Health IT had been a one-up. I thought it might have been a fluke, written and released by some young disgruntled employee like Justen Deal who would be fired. I thought the Joint Commission Alert would be ignored by the players in the highly lucrative and often exploitative (of clinician ignorance and learned helplessness, that is) HIT ecosystem.

I may have been mistaken. The NRC report may change that.

Significantly, the NRC report was about a number of the best medical organizations in this country, not about the smaller less experienced hospitals where things are far worse.

Finally, the report is not news to me, others who objectively observe HIT (especially those without financial or other conflicts of interest), or to readers of this blog. In the words of abducted-by-aliens, ignored-by-the-experts pilot Russell Casse after several cities are destroyed by the aliens: 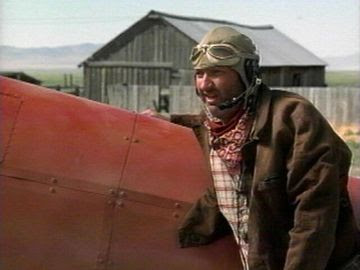 Read the whole Press Release below.

Perhaps we as a profession should feel for patients who were denied care due to lack of funds while the IT industry diverted capital out of healthcare for "insufficient" HIT, or were denied good care through malfunctioning HIT or non-functioning HIT, or who suffered outcomes that good HIT could have prevented (i.e., the cost of lost opportunity - my own father died from malpractice as a result of informational confusion a good EHR might have prevented). All while the society's gatekeepers ignored the Distant Early Warning Line of the HIT pioneers that all was not well. (Anyone know of other sectors that crashed this past year where such warnings were ignored?)

The Press Release should be read in its entirety. I will not comment on it here further, other than to say that HC Renewal can be searched on the term "Medical Informatics", "EMR" or similar for much more material on these issues.

Emphases in boldface are mine.

-- Current efforts aimed at the nationwide deployment of health care information technology (IT) will not be sufficient to achieve medical leaders' vision of health care in the 21st century and may even set back the cause, says a new report from the National Research Council. The report, based partially on site visits to eight U.S. medical centers considered leaders in the field of health care IT, concludes that greater emphasis should be placed on information technology that provides health care workers and patients with cognitive support, such as assistance in decision-making and problem-solving.

In 2001, the -- which with the Research Council, National Academy of Sciences, and National Academy of Engineering make up the National Academies -- laid out a vision of 21st century health care that involves care which is safe, effective, patient-centered, timely, efficient, and equitable. Many aspects of this vision involve information technology, such as having access to comprehensive data on patients, tools to integrate evidence into practice, and the ability to highlight problems as they arise. To see how leaders in U.S. health care use computing and information management in providing care, the committee that wrote the new report visited eight medical centers -- University of Pittsburgh Medical Center; Veterans Affairs Medical Center in Washington, D.C.; HCA TriStar and the Vanderbilt University Medical Center, both in Nashville, Tenn.; Partners HealthCare System in Boston; Intermountain Healthcare in Salt Lake City; University of California-San Francisco Medical Center; and Palo Alto Medical Foundation in California.

Although the institutions showed a strong commitment to delivering quality health care, the IT systems seen by the committee fall short of what will be needed to realize IOM's vision. The report describes difficulties with data sharing and integration, deployment of new IT capabilities, and large-scale data management. Most importantly, current health care IT systems offer little cognitive support; clinicians spend a great deal of time sifting through large amounts of raw data (such as lab and other test results) and integrating it with their medical knowledge to form a whole picture of the patient. Many care providers told the committee that data entered into their IT systems was used mainly to comply with regulations or to defend against lawsuits, rather than to improve care. As a result, valuable time and energy is spent managing data as opposed to understanding the patient.

Ideally, IT systems would place raw data into context with current medical knowledge to provide clinicians with computer models, "virtual patients," that depict the health status of the patient, including information on how different organ systems are interacting, epidemiological insight into the local prevalence of disease, and potential patient-specific treatment regimens. Although health care workers could still have access to the raw data if they needed it, clinicians would be able to work with models without drowning in data. This cognitive support would help clinicians more efficiently and effectively determine a course of action through improved understanding of a patient's status, says the report.

The report identifies several principles for improving health care IT. In the short term, government, health care providers, and health care IT vendors should embrace measurable improvements in quality of care as the driving rationale for adopting health care IT, and should avoid programs that focus on adoption of specific clinical applications. In the long term, success will depend upon accelerating interdisciplinary research in biomedical informatics, computer science, social science, and health care engineering.

Copies of COMPUTATIONAL TECHNOLOGY FOR EFFECTIVE HEALTH CARE: IMMEDIATE STEPS AND STRATEGIC DIRECTIONS are available from the National Academies Press; tel. 202-334-3313 or 1-800-624-6242 or on the Internet at HTTP://WWW.NAP.EDU. Reporters may obtain a copy from the Office of News and Public Information (contacts listed above).

[ This news release and report are available at HTTP://NATIONAL-ACADEMIES.ORG ]

SUSAN B. DAVIDSON
Weiss Professor and Chair
Computer and
of

Supplementary points: sometimes saying "I told you so" to those who place the scarlet letters upon those not afflicted with HIT irrational exuberance is appropriate. This is one of those times.

To patients harmed or killed by the clouded vision and/or conflicts of interest of the pundits, I hereby apologize for the learned helplessness of the healthcare community in not taking charge of this situation sooner.

as a civilian new to this debate, I'm confused as to why all believe IT is such a great idea and what problems, beyond the difficulty of deciphering physician handwriting, it promises to achieve.

obviously there's a POSSIBILITY of avoiding repetitive tests and procedures, but no one doing such tests wants to avoid them because they are revenue producers. there's already a rich anecdotal collection of stories about docs who simply refuse to use tests done elsewhere and insist on doing their own. unless that attitude changes -- and I'd be most interest in any evidence is does when shared IT systems are in place -- this looks like another way to make players in the system richer and make their lives slightly easier without any detectable patient or societal benefit.

what am I missing here?