Mark Leavitt, Head of CCHIT: Behind the Times and Uninformed on Health IT Realities?

Signs that a leader who alleges himself or herself to be objective and a scientist is, in fact, neither objective nor scientific include:
The head of CCHIT, Mark Leavitt, has penned the following at iHealthBeat (emphases and comments in red italic mine):

Health IT Under ARRA: It's Not the Money, It's the Message

... Estimates by the Congressional Budget Office suggest the total incentive payout could reach $34 billion, although with expected savings the net cost is half that. Add to that another $2 billion that the Office of the National Coordinator for Health IT can use on various initiatives in support of the goal of having an EHR for every American by 2014.

[Note the catchy marketing slogan, which carries the implicit message "what manner of people would oppose Mother and Apple Pie?" - ed.]

But more important than the money itself is the message implicitly conveyed along with it. Will incentives be perceived as an intrusive, carrot-and-stick manipulation of health care providers' business decisions? Or will health care providers interpret ARRA as the correction of a reimbursement anomaly, welcoming the opportunity to modernize their information management and transform the care they deliver.

Some of the early signs have been worrisome. Before ARRA, most surveys concluded that cost was the No. 1 barrier to EHR adoption. But as soon as it appeared that the cost barrier might finally be overcome, individuals with a deeper-seated "anti-EHR" bent emerged. Their numbers are small, but their shocking claims -- that EHRs kill people, that massive privacy violations are taking place,

that shady conspiracies are operating --

make stimulating copy for the media. Those experienced with EHRs might laugh these stories off, but risk-averse newcomers to health IT, both health care providers and policymakers

[i.e., those who take due diligence and fiduciary responsibilities seriously - ed.]

are easily affected by fear mongering.

That is, Bah! to the apostates' narratives --

-- even though many of these narratives are in the peer-reviewed biomedical science and biomedical informatics literature ...

I'm really tired of amateurish political rhetoric and marketing puffery masquerading as substantive debate on critical issues as above. However, being experienced with EHRs, their design, implementation and lifecycle, and concerned with widespread irrational exuberance over health IT (a facilitative tool that carries risk to patients and medical organizations if not done well) I am not at all "laughing these stories off", and will critique the above in a quite serious manner.

Indeed, "laughing off" stories from credible sources and personnel (e.g., many AMIA members) about potential harm from an experimental technology affecting patients seems the height of hubris, or blindness of a kind mediated by incomplete knowledge or conflicts of interest.

First, binary thinking. It seems those who critique health IT's drawbacks are "individuals with a deeper-seated anti-EHR bent." That is, they don't buy into the consensus of the industry "experts" and must therefore be biased and wrong.
I, in fact, am a health IT proponent, but simply abhor poor HIT such as at my series here, or HIT sold to my organization in an unusable (but "Certified") state as in the Civil Complaint here (PDF). I believe the rush to national EHR by 2014 is premature, will waste massive amounts of money, and will cause disruption to an already strained healthcare system with resultant adverse effects. I believe far more research remains to be done before our social and technical understanding of "how to do clinical IT well" justifies mass government-mandated cybernetic re-engineering in healthcare. (See literature list below.)
On the issue of ad hominem attacks against questions and critique, I documented those at Healthcare Renewal at "Open letter to Mark Leavitt, Chairman, Certification Commission for Healthcare Information Technology on Penalties For Use of Non-Certified HIT" at this link. Both I and another physician, David Kibbe, MD, MBA, Health IT Consultant at American Academy of Family Physicians, were subjected to "nonlinear" commentary.

It also seems Dr. Leavitt is unfamiliar with or deliberately downplaying a growing body of literature on health IT risks and failures. [Health IT failure never, ever puts patients at risk, as I wrote here, of course - ed.]

The National Programme for IT in the NHS: Progress since 2006, Public Accounts Committee, January 2009. Summary points here.

Finding a Cure: The Case for Regulation And Oversight of Electronic Health Records Systems, Hoffman and Podgurski, Harvard Journal of Law & Technology 2008 vol. 22, No. 1

Predicting the Adoption of Electronic Health Records by Physicians: When Will Health Care be Paperless? Ford et al., J Am Med Inform Assoc. 2006;13:106-112

“Avoiding EMR meltdown.” About a third of practices that buy electronic medical records systems stop using them within a year, AMA News, Dec. 2006.

"The failure rates of EMR implementations are also consistently high at close to 50%", from Proceedings of the 11th International Symposium on Health Information Management Research – iSHIMR 2006

The literature at my HIT website's "Other Resources" page (link)

3. The warnings of HIT dangers from the U.S. Joint Commission, the EFMI, as linked above, and others; doubts about cost savings from Wharton and Stanford professors (surely no amateurs).
In the June 20, 2009 Wall Street Journal article "The Myth of Prevention", Abraham Verghese, Professor and Senior Associate Chair for the Theory and Practice of Medicine at Stanford, echoed several Wharton professor's doubts about the cost savings and ultimate value of electronic medical records, touted as the cybernetic savior of healthcare:

There are also reports of problems from FDA-like agencies of other countries such as Sweden's, whose report entitled "The Medical Products Agency’s Working Group on Medical Information Systems: Project summary" (available in English translation at this link in PDF) stated:

It is becoming more common that electronic patient record systems and other systems are interconnected, for instance imaging systems or laboratory systems. It is obvious that such systems should not be regarded as “purely administrative”; instead they have the characteristic features that are typical for medical devices. They sort, compile and present information on patients’ treatments and should therefore be regarded as medical devices in accordance to the definition.

Since the electronic patient record system often replaces/constitutes the user interface of “traditional” medical device systems, the call for 100% accuracy of the presented information is increased. Patient record systems have crucial impact on patient safety, and this has been proven to be the case after a series of incidents [including deaths - ed.] that has been reported to the Swedish National Board of Health and Welfare.

On wonders if Dr. Leavitt would include the Swedish Medical Products Agency, who incidentally have a cooperation agreement with our own FDA, under the category of "fearmongers."

Finally, stories of HIT mayhem of which Dr. Leavitt seems blissfully unaware are making their way to appropriate political circles. The whistleblowers are afraid to speak out publicly due to fear of job loss or retaliation. However, when the case examples do come out, it may be Dr. Leavitt who will be found to be "fear mongering" about those who care more about patients and their rights than about information technology.
Health IT Under ARRA: It's Not the Money, It's the Message. Indeed.
And Dr. Leavitt's message about those who think critically about health IT seems quite ill informed and mean spirited.
Finally, to get past the ad hominem and other logical fallacy nonsense I believe will be coming my way, I'll just admit to any and all of it. I'm an SOB, I'm a disgruntled curmudgeon, I'm an HIT dilettante, my uncle was in the mafia, I kick little cygnet swans in the park to be mean to Chucky, the cob (father) , and Princess, the pen (mother). /sarc 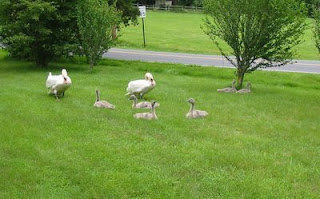 The Mute Swan family of Towamencin Twp., PA. Click to enlarge. The cygnets have really grown this past month (major cuteness warning if you click this picture from June 1!)

Now that we're hopefully past the expected ad hominem, perhaps the real issues can be addressed.

As a final piece of advice to Dr. Leavitt, I can add that dismissing concerns of others, Dogbert-style, is not a way to win friends and influence people.

Humor and a little humility work much better.

Here's one for you. I can't say this scientifically and my "data" is only personal, but...

I know three to four dozen practices using an EHR quite intimately through my work. [I know 100s and 100s directly and personally, but not as well.] Nearly *ALL* of the practices I know would switch EHR vendors in a second if the two conditions below could be met:

- Now that they know what they want, the new EHR would actually work for them.

- They had a way to convert the data, even poorly.

Really. Cost isn't an issue - certainly not among the early adapters, anyway - but those who are truly "experienced with EHRs," at least among the practices I know, don't laugh off the stories that Leavitt seems to find funny. They can all tell you dozens of HIT-dun-wrong stories.

In other words - the folks who most believe in HIT (they're early adaps after all) aren't motivated by things like stimulus money because they know what's actually important.

The stim money is all about making the VPs of the big companies richer. Whether that's the intent or not, that will be the result.

I doubt he actually finds such stories funny.

He is either unaware of the growing literature (also doubtful), or more likely is playing simple politics in dismissing HIT critique through disparagement, even though much of the critique appears in the peer reviewed biomedical and biomedical informatics literature.

In either case, this casts doubts in my mind as to whether such approaches are appropriate for the leader of a Health IT "certification" organization.

Very nice posts. Some links are very informative. More and more hospitals and private clinics are moving towards EHR, regardless of the fact that the transferring data digitally is a not easy.