Ghostwriting is a topic covered extensively at Healthcare Renewal, including at my post "Wyeth: Ghostwritten Papers Fake, But Accurate" here, Roy Poses' "Wyeth's Industrial Scale Ghost-Writing" here, and many others about Wyeth and other pharmas that can be viewed via this link: http://hcrenewal.blogspot.com/search/label/ghost writing.

A story in the Philadelphia Inquirer yesterday about Wyeth and ghostwriting brought to mind my medical school days at Boston University, in a metaphorical and rather negative way, regarding an oddity reflecting today's pharma industry.

In those years I lived next to Boston City Hospital on the top floor of a 29-story high rise at 35 Northampton Street, at that time one of the toughest and highest crime neighborhoods in the region if not the country (I was careful and lucky, and only got mugged at gunpoint once.) I had an excellent bird's-eye view of the urban decay in the area, reflective of ethical decay in the community. 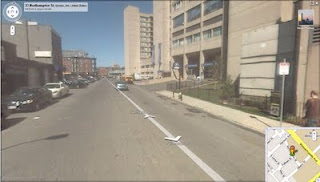 Across the street from the high rise was an oddity - a very large liquor store named Blanchard's. Inside Blanchard's was a very small grocery department of all things. Have a snack with your booze! (I went in only twice; once to see what it was all about, and again during the Blizzard of '78 to get some needed food when all transit in the city was shut down and several feet of snow -- and neighborhood guns -- inhibited foot travel.)

The area has much improved in the past three decades, but according to Google street view the liquor store is still there: 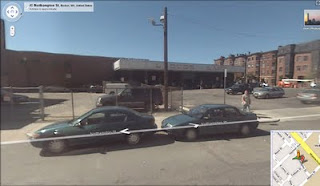 In the 1970's "Liquor Land" was a large liquor store with a small grocery department named "Blanchard's." Click to enlarge.

Why does this odd store remind me of Wyeth, and more generally today's pharmaceutical industry?

(Or, perhaps more accurately, a large marketing industry with poor ethics and a busywork section disguised to look like R&D. As a colleague noted in my post "Pfizer/Wyeth Merger And Sacrificing The Future: Laying Off Scientific Staff All Over The Place" here, a small fraction of prime scientist intellectual horsepower and time is actually spent on true R&D today, the rest wasted on feeding the bureaucratic corpulence that is the modern pharma research lab. He observed that "what we today call pharmaceutical R&D is in reality busywork disguised to look like R&D, in effect a well engineered, well managed, massively expensive failure.")

Here is what led to my "pharmas have become large marketing firms with a small R&D effort" metaphor. It was a story in the local newspaper on ghostwriting.

The glib quotes from Dr. Joseph Camardo, Wyeth's senior vice president of global medical affairs, on the practice of ghostwriting are simply stunning:

Ghosts in the medical machine

Was drug research infected by ghostwriters? With Paxil suit in court, a Chadds Ford firm says it was ethical.

When GlaxoSmithKline P.L.C. marketers looked for doctors to promote the antidepressant Paxil, they called the project CASPPER. The name was more than just an offbeat tribute to the friendly cartoon ghost. It was a wink and a nod to "ghostwriting," a questionable practice in which scientists put their names on research written by someone else, usually a writer paid by a drugmaker.

Charges of ghostwriting have been lobbed against many companies in recent years, including Glaxo, Wyeth, AstraZeneca P.L.C., and Merck & Co. Inc., often arising in lawsuits from consumers claiming a drug hurt them.

... Documents released in connection with 8,000 lawsuits filed against Wyeth over Premarin and Prempro show that the company, which employs several thousand people in Collegeville, paid a medical-writing firm to produce articles from 1998 to 2005 that allegedly downplayed the risks of hormone treatment and emphasized benefits.

In 2002, researchers stopped a landmark federal study after finding that menopausal women who took certain hormones had an increased risk of breast cancer, heart disease, and stroke.

"Ghostwriting was used to sway physician opinions to favor hormone use as disease prevention long after that was a scientifically defensible position," Fugh-Berman [writer Adriane Fugh-Berman - ed.] said.

Joseph Camardo, Wyeth's senior vice president of global medical affairs, called Fugh-Berman's view "baseless." Medical opinion evolves, he said, and the papers in question reflected scientific understanding then. He also said the authors alone controlled the content and writing of the papers, though some did have outside help paid for by Wyeth.

"It's really being misrepresented as something we wrote and paid for that said what we thought it should say," Camardo said. "But the authors were not paid, and the authors had the final say."

... Studies on ghostwriting have suggested that anywhere from 8 percent to 75 percent of articles in medical journals may involve the practice.

Aside from the point I raised in my post "Has Ghostwriting Infected The Experts With Tainted Knowledge, Creating Vectors for Further Spread and Mutation of the Scientific Knowledge Base?" here regarding possible severe contamination of the literature and therefore of "expert knowledge" as it exists today, Camardo's response raises a cornucopia of questions.

Regarding "Medical opinion evolves, he said, and the papers in question reflected scientific understanding then":

Regarding "the authors alone controlled the content and writing of the papers, though some did have outside help paid for by Wyeth":

Regarding "the authors were not paid, and the authors had the final say":

To claim the KOL's were "not paid" is disingenuous. In fact, I find his entire argument disingenuous, a play on words, PR "spin" completely callous to the needs for scientific objectivity, the advancement of science, and ultimately to patient's lives.

This is marketing, with poor ethics, in the extreme.

Being somewhat familiar with authorship issues as former Director of Published Scientific Information Resources and The Merck Index (of Chemicals, Drugs & Biologicals), 13th ed. at Merck Research Labs, I further pointed out in my post "Wyeth: Ghostwritten Papers Fake, But Accurate" here, that:

... in addition to the violation of accepted practices of authorship, such as specified by NIH and the International Committee of Medical Journal Editors, among others, such lucky authors [i.e., those who claim authorship of ghostwritten papers] get to "count" such papers in their academic portfolios, presumably also in violation of their own institutional policies and guidelines for fair attribution and intellectual honesty, e.g., here [Harvard - ed.]

These industry practices and Camardo's position may be based on:


Is Camardo informed and upfront? Inept? Disingenuous and dishonest? That is up to the reader to decide.

In my aforementioned post "Wyeth: Fake but Accurate" I'd also noted Wyeth attorney Stephen Urbanczyk acknowledging that the ghostwritten articles were part of a marketing effort. But he said that they were also "fair, balanced, and scientific." More spin.

This raises the following observation. It is said that you can judge people by the company they keep. I also believe that:

You can judge companies by the people they keep.


If so, then the objectivity of any article about Wyeth drugs is called into question, and physicians and patients should utilize Wyeth drugs (and literature on them) with great caution.

-- SS
Addendum: this from the Medical Ethics blog:

Recently released court documents in a lawsuit against drug giant Wyeth, thanks to a court action by the New York Times and PLoS Medicine, are now searchable at a University of California, San Francisco web site.

The Wyeth documents are the latest made searchable at the Drug Industry Document Archive, or DIDA, which archives the documents from several high-profile cases.

... The documents were first made available last month on the PLoS web site, but were not searchable and difficult to sort through. The DIDA site now make it possible to search for documents by name, type or content.

Also see "Ghostwriting: Why they do it" at that blog.
-- SS
Posted by InformaticsMD at 9:32 AM

I am inclined to support Dr. Camardo's take. While it is conceivable a Medical Professor could simply lend his name to a paper describing research he had nothing to do with, it is unlikely. When one considers all the checks and balances in place to create a defensible clinical trial, and then have have a medical paper published in the peer reviewed literature, it is nearly inconceivable that a grossly biased paper could find its way to become published. Of course, pharma might not support the publication of work at odds with the the findings of the research they have funded, but typically editorial boards and the experience of the authors lends itself to the injection of balance into these works. The term ghostwriter in this context is unfortunate, as these writing firms primarilyengage in the technical aspects of perfecting manuscripts, the outlines of the documents do reflect the authors input.

While it is conceivable a Medical Professor could simply lend his name to a paper describing research he had nothing to do with, it is unlikely....etc.

See the essays at this blog under "ghostwriting" (query search http://hcrenewal.blogspot.com/search/label/ghost%20writing) that illustrate you are wrong.

It is nearly inconceivable that a grossly biased paper could find its way to become published.

By the way, leaving anonymous comments is a form of ghostwriting. While we allow it for those who might face, for example, employer retaliation for leaving certain comments, can we agree your views are (while wrong) uncontroversial, and that it would be better if you revealed your identity?

For all we know, you could be in the employ of such a ghostwriting firm, PR firm, or have some other conflict of interest.