Will the New Conscience and Religious Freedom Division of the US Department of Health and Human Services Help Health Care Professionals Challenge Morally Objectionable Acts - Like Bribery, Fraud and Other Criminal or Corrupt Practices?

So perhaps a new initiative of the US Department of Health and Human Services could relieve health care professionals besieged by unethical and immoral practices.  Per the Washington Post (on January 18, 2018),


The Trump administration on Thursday announced the creation of a new conscience and religious freedom division aimed at protecting doctors, nurses and other health-care workers who decline to participate in care that goes against their moral or religious convictions.

Speaking at an event featuring Republican lawmakers and religious leaders, Acting Health and Human Services Secretary Eric Hargan noted that many of the nation's hospitals, clinics and hospices are run by faith-based groups. And many have found themselves forced to provide services or referrals that violate what they believe.

'For too long, too many of these health-care practitioners have been bullied and discriminated against,' he said.

While federal officials did not immediately offer details about the new enforcement office, a Conscience and Religious Freedom section appearing Thursday on the HHS site — showing a female health-care worker in a Muslim headscarf — provides some hints. The description of the division's mandate cites abortion, sterilization and assisted suicide as examples of the types of procedures that would be covered. But the language is broad, and health experts said it appears likely to also cover a host of other scenarios, such as treating transgender patients or those seeking to transition to the opposite sex.

HHS said the protections will apply to discrimination or coercion of  'providers who refuse to perform, accommodate or assist with certain health-care services on religious or moral grounds.' They would also apply to training and research activities, according to the department.


Immoral Practices to Which Health Care Professionals Might be Exposed

On Health Care Renewal, we have focused on unethical, self-interested, conflicted and corrupt or criminal practices of the leadership of health care.  So, for example, we have seen cases in which -

- Physicians and other health care professionals were lured into financial relationships with large health care corporations which created obvious conflicts of interest, especially when they were induced to help market those corporations' products (often in the guise of "key opinion leaders,"), and often without disclosing their conflicts, making their marketing deceptive.  Health care professionals might resist such relationships, or be morally offended by their colleagues' and supervisors' acceptance of such relationships.

- Top executives of hospitals, hospital systems, and other health care provider organizations may have perverse incentives that lead them to put short-term revenue ahead of good patient care, education or research.  Health care professionals might be morally offended by such mission hostile management, and its effect on the quality of patient care, and the integrity of education and research.

-  Leaders of government agencies may transit to or from commercial entities which might be subject to their agencies' regulations or policies.  This has been called the revolving door, and can be considered a form of health care corruption.  Health care professionals might be morally offended by the regulations or policies of agencies led by people who have come through, or will go through the revolving door.

Keep in mind that many health care professionals come from mainstream Judaism, Christianity or Islam.  All accept the Old Testament as a fundamental guide.  The Bible contains many exhortations to avoid immoral behavior, most famously the Ten Commandments. 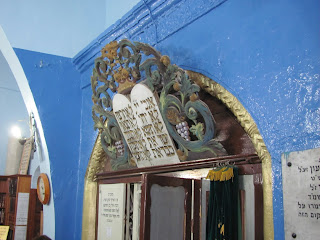 [The Ten Commandments - in an ancient synagogue in Tzfat, Israel]

Some quotes from the Old Testament about the sorts of immoral behavior listed above:

Do not pervert justice or show partiality. Do not accept a bribe, for a bribe blinds the eyes of the wise and twists the words of the innocent. [Deuteronomy 16:19]

Justice, justice shalt thou follow, that thou mayest live, and inherit the land which the LORD thy God giveth thee. [Deuteronomy 16:20]

Bread of falsehood is sweet to a man; But afterwards his mouth shall be filled with gravel. [Proverbs 20:17]

He that walketh righteously, and speaketh uprightly; He that despiseth the gain of oppressions, That shaketh his hands from holding of bribes, That stoppeth his ears from hearing of blood, And shutteth his eyes from looking upon evil; He shall dwell on high; [Isaiah 33:15 -16]

A wicked man taketh a gift [bribe] out of the bosom, To pervert the ways of justice. [Proverbs 17:23]


So for most health care professionals, the actions in health care that may be most morally repugnant would be bribery, kickbacks, fraud, and other forms of corruption or criminality going on around them.  In theory, and on paper, the new Conscience and Religious Freedom Division ought to be a powerful force to combat health care corruption.

Summary - What Were They Thinking?

Somehow, though, I am guessing that the people who came up with this new initiative were not thinking about anti-corruption efforts.

First I would note that the announcement was made by Acting Health and Human Services Secretary Eric Hargan.  We discussed Mr Hagan here. A hint: the post was entitled, "Worst Health Care Revolving Door Case So Far? - From Lobbyist to Acting Secretary of Department of Health and Human Services."  Mr Hargan is a lawyer who spent years as a lobbyist for health care corporations prior to being nominated to be acting secretary.

So I must say I am morally offended that Mr Hargan is now the Acting Secretary of DHHS.  So I really do not think he and his cronies in the department were thinking about people morally offended by fraud, bribery, kickbacks or other criminal or corrupt practices, including the revolving door, when they set up this new division.  Moreover, as the Post article stated,

The description of the division's mandate cites abortion, sterilization and assisted suicide as examples of the types of procedures that would be covered. But the language is broad, and health experts said it appears likely to also cover a host of other scenarios, such as treating transgender patients or those seeking to transition to the opposite sex.

The announcement, which comes one day before abortion opponents' annual March for Life, represents the latest move by the Trump administration to allow individuals and institutions to opt out of providing certain services or benefits based on such objections. In 2017, the administration issued new rules allowing exemptions for more employers, including for-profit businesses, from providing no-cost contraceptive coverage through their health insurance plans.

House Majority Leader Kevin McCarthy (R-Calif.), for one, said the previous administration expected health care workers 'to conform' rather than follow their religious beliefs. 'What a difference a year makes,' he added.

Roger Severino, director of the department's Office for Civil Rights, echoed that theme, saying that 'HHS has not always been the best keeper of this liberty.' Health-care workers' complaints to his office have increased in recent years, he said.

'Governments big and small have treated conscience claims with hostility instead of protection, but change is coming, and it begins here and now,' Severino said.

And Montse Alvarado, executive director of the Becket Fund for Religious Liberty, a nonprofit law firm, stressed, 'It is important to recognize that we have come to a point where a division like this would be necessary.' What happened under the previous administration, she said, resulted in 'forcing Americans to choose between their beliefs and their livelihood.'


IMHO, the people who came up with the idea of this new division completely ignored the religious and moral beliefs of a majority of Americans.

Furthermore, given the description of the Division's statement of conscience rights:


It seems that it ought to provide protections to people who object to fraud, bribery, kickbacks or other corrupt practices on religious or moral grounds.  So maybe those of us who are exposed to such practices ought to see whether the division itself is real, or some new kind of fraud.

Please tell me this was sarcasm. The shattering of the wall between church and state this thing represents aside, it was created for the sole purpose of allowing immoral acts—as in allowing medical personal to refuse to treat patients whose condition or status "violates their religious principles".

please read the post more carefully. I said that according to what is on the website, this initiative should support health care professionals who find something morally wrong going on in their health care organizations. The majority of such instances are probably people who are exposed to the sorts of unethical behavior I listed (fraud, bribery, etc). If the proposal is operationalized to support such people, and there are probably a lot of them out there, it could do some good.

I do suspect, though, that the people at DHHS who came up with this idea really only intended to help a limited group of extreme fundamentalists, e.g., those who are most concerned about contraception, abortion, gay marriage, etc. If these are the only people helped, then the initiative would be blatantly discriminatory and unconstitutional, and should be shut down.

We will have to see. But maybe some health care professionals who do truly object to some sort of fraud, bribery, criminality or corruption going on where they work should see if this initiative could be made to help them. If they try, and are rejected, there would be grounds to shut it down.

And I am sure the ACLU et al will be watching very closely to see which it is.