The Revolving Door Spins Again: the Now Constant Coziness Between the Health Care Industry and US Government

Just because Washington DC is now crazy town does not mean the revolving door has stopped spinning.  We have been dutifully accumulating cases, so it is time to present our latest update. 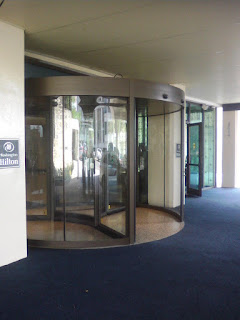 I will divide this into two sections 1) the incoming revolving door, through which come people from the health care industry to enter US government positions in which they may influence health care regulation or policy relevant to their former positions; and 2) the outgoing revolving door, through which go people from US government positions in which they influenced health care regulation or policy to industry positions which were relevant to the scope of their government work.  In each section, we will list cases chronologically according to when they were made public.

This was reported in Health Leaders Media in April, 2018:

Parker's profile on LinkedIn says he worked for Anthem from 1995 through 2004, serving more than four years as president of Anthem Blue Cross and Blue Shield of Maine.

Parker spent more than three years as an independent healthcare consultant before landing his job as president and CEO of provider-sponsored IU Health Plans in 2012. Last year, he was named president and CEO of MDwise, an Indianapolis-based Medicaid managed care organization.

His knowledge and expertise will be vital to our work at HHS to ensure that Americans have access to insurance that meets their needs,

Funny, he did not seem at all worried about putting a long term leader of for-profit health insurance companies in charge of ... health care (but operationally largely health insurance) reform.

This was summarized in The Hill in December, 2018:

The top consumer protection official at the Federal Trade Commission (FTC) is barred from handling cases involving more than 100 different companies due to conflicts of interest from his prior work as a private sector attorney, according to documents obtained by the consumer group, Public Citizen.

Andrew Smith, who was tapped as the chief of the FTC’s Consumer Protection Bureau in May, listed 120 conflicts on a financial disclosure form that Public Citizen released on Thursday.


The Hill's reporting emphasized Smith's representation of financial and technology firms, but he also represented a number of big health care corporations, based on the disclosure form that Public Citizen obtained via a freedom of information act (FOIA) request.

These included Bioverativ (a Sanofi subsidiary), Cardinal Health, GlaxoSmithKline, and the Pharmaceutical Research and Manufacturers of America (PhRMA).

Even in an administration full of unprecedented conflicts of interests, Mr. Smith’s conflicts stand out from the pack


An article in GizModo noted

Senator Elizabeth Warren was another staunch critic of Smith’s hire who in May said the agency’s decision was 'outrageous' and added that the FTC 'should pick someone with a track record of protecting consumers, not companies that cheat people.'

Per Matthew Herper writing for Forbes in December, 2018:

The Food and Drug Administration has named Amy Abernethy, currently the chief medical officer at Flatiron Health, a unit of the drug giant Roche, to one of its highest positions. She will start in a few months.

Abernethy, an oncologist who is credited with helping Flatiron transform data collected from electronic medical records into information that might become acceptable to FDA regulators, will be the Principal Deputy Commissioner for Food and Drugs. This is the highest position at the FDA that is not a political appointment. It cuts across all areas of the agency’s remit, overseeing initiatives that cut across offices that oversee the regulation of drugs, medical devices, tobacco and food. Flatiron was purchased by Roche at a valuation of $2.1 billion earlier this year.


Mr Herper did include this dry statement

That potential conflict of interest could be an issue for some outside the FDA.


Of course, the current FDA commissioner was rather blase about any conflict of interests Dr Abernethy might have:

In his memo to staff, Scott Gottlieb, the FDA commissioner, said that Abernethy’s ethics review is still pending. It will likely help that she is unlikely to own large amounts of stock in either Flatiron or Roche, because Roche paid for Flatiron in cash.


There was considerable discussion of  Dr Gottlieb's own conflicts of interest at the time of his appointment (see, for example, this article from the New York Times).

This was reported in April, 2018 in the newsletter of the Regulatory Affairs Professional Society:

Twenty-year FDA veteran Badrul Chowdhury, most recently director of the Center for Drug Evaluation and Research’s (CDER) Division of Pulmonary, Allergy and Rheumatology Products, has taken a job this month as senior vice president at AstraZeneca.

FDA confirmed to Focus that Chowdury joined the agency in 1997 and left on 16 April. And Chowdury isn’t the only one to leave in recent months for an industry job, FDA said.

Meanwhile, Jean-Marc Guettier, former director of FDA’s Division of Metabolism and Endocrinology Products, left FDA in December 2017 for Sanofi, Niraj Mehta, former associate director for global regulatory policy at FDA moved over to Merck as a director in March 2018....

So where could former FDA officials get such well compensated, top positions outside the pharma industry?

Reported in the Home Health Care News in May, 2018:


Note that in 2017, we discussed how Greenstein had transited the incoming revolving door from a health care technology company to DHHS.

As reported in Health Leaders Media in January, 2019:

Tom Price, MD, the scandal-plagued former secretary for the Department of Health and Human Services, has been named to the advisory board of Jackson Healthcare.

A spokesperson for the Atlanta-based healthcare staffing firm said that the company is privately held and would not detail Price’s compensation.


It is interesting that Health Leaders Media inserted that phrase, "scandal-plagued," in such a prominent way.  Nonetheless, the leaders of Jackson Healthcare was effusive:

'Nobody has as profound an understanding of the national healthcare landscape as Dr. Price,' Richard L. Jackson, chairman and CEO of Jackson Healthcare, said in a media release. Tom has exhibited an unwavering commitment to preserving the patient-physician relationship. That mindset, along with his physician, business and policy experience, will make him an invaluable addition to our board.'


No scandals to see here, please move on.

In February, 2019, ProPublica published an article documenting the departure of 33 top  executive branch officials for lobbying positions.  These included:

Courtney Lawrence was a longtime aide for Reps. Bill Cassidy and Tom Price and a federal lobbyist for the insurance trade association America’s Health Insurance Plans before taking a job as assistant secretary for legislative affairs at Health and Human Services in March 2017, when Price briefly headed the agency. Lawrence stayed for 18 months before leaving in August 2018 for a director role at Cigna Corp., the health insurance conglomerate.

Lawrence registered as a lobbyist with Cigna in October. Her disclosure forms state that she was working on proposed changes to Medicare, the Affordable Care Act and prescription drug rebates. Federal lobbying disclosures show that Lawrence was one of several lobbyists to communicate with federal agencies and the White House, and not just members of Congress. In a statement, Cigna asserted that the lobbying disclosure — which was prepared by the company — is inaccurate. Cigna blamed a 'formatting issue.' The statement said Lawrence 'does not and will not lobby the Executive Branch.' The company said it would correct her lobbying disclosure form.

So where will she lobby instead?


That should do it for now.

With so many crises appearing during the Trump regime, the issue of the revolving door seems to get lost in the fray.  However, the Trump regime has supercharged a chronic problem, especially in its proclivity to hire people direct from industry to regulate and set policy that affect their old employers.  As we have said again and again, that is three times in 2018,