Adulterated Ranitidine, and Before that, Valsartan, Irbesartan and Losartan

Another case of drug adulteration has just been made public.  Per the New York Times, Sept 13, 2019,

The Food and Drug Administration said on Friday that it had detected low levels of a cancer-causing contaminant in samples of heartburn medicines containing the drug commonly known as Zantac.

Zantac, the brand-name version of the drug, is sold by Sanofi, but generic versions [ranitidine] are widely sold. The F.D.A. has not identified any specific products that were affected.


The contaminant is one that has been seen before.

The contaminant, a type of nitrosamine called N-nitrosodimethylamine, or NDMA, is the same one that was found in some versions of valsartan, a blood-pressure drug carrying the brand name Diovan.


In the current case, its source is not yet apparent,

NDMA can form during manufacturing if the chemical reactions used to make the drug are not carefully controlled and monitored, the F.D.A. has said.

Jeremy Kahn, an agency spokesman, said Friday that the agency is still investigating contamination of the heartburn drugs, and that it is unclear how many companies’ products are affected and how the problem originated.

Based on the recent case of adulterated valsartan and other angiotensin receptor blocker (ARB) drugs, tt is likely that manufacturing of the drug, at least the "active pharmaceutical ingredient" in it, was outsourced.

The valsartan recalls have renewed questions about the safety of the American drug supply, particularly of generic drugs, composed of raw ingredients that are frequently manufactured in countries like China and where F.D.A. oversight has lagged.

The same type of impurities were later found in two other blood-pressure drugs, irbesartan and losartan, in the same [ARB] class as valsartan. Two more nitrosamines — nitrosodiethylamine, or NDEA, and N-Nitroso-N-methyl-4-aminobutyric acid, or NMBA — were found in the drugs. Lists of the affected products are posted on the F.D.A. website.


Furthermore, the FDA may not yet be on top of the problem with ranitidine:

The agency’s announcement came on the same day that an online pharmacy, Valisure, petitioned the F.D.A. to request a recall of all products containing ranitidine, because it said its own tests had revealed high levels of NDMA, above the F.D.A.’s acceptable daily limit. The Valisure petition speculated that the source of the NDMA was the result of the 'inherent instability' of the ranitidine molecule, which can degrade under certain conditions, such as when it is digested, to create NDMA.

'Our feeling is that this is extremely troublesome,' said David Light, the chief executive of Valisure, which is based in Connecticut. 'We took it off our formulary right away.'


Moreover, we should have been warned that these cases were coming.  The cases of adulterated ranitidine and ARBs are not the first important cases of drug adulteration in the 21st century.  In 2008, we wrote aabout the case of toxic adulterated heparin from pigs in China.  We later summarized of that case was:

Baxter International imported the 'active pharmaceutical ingredient' (API) of heparin, that is, in plainer language, the drug itself, from China. That API was then sold, with some minor processing, as a Baxter International product with a Baxter International label. The drug came from a sketchy supply chain that Baxter did not directly supervise, apparently originating in small 'workshops' operating under primitive and unsanitary conditions without any meaningful inspection or supervision by the company, the Chinese government, or the FDA. The heparin proved to have been adulterated with over-sulfated chondroitin sulfate (OSCS), and many patients who received got seriously ill or died. While there have been investigations of how the adulteration adversely affected patients, to date, there have been no publicly reported investigations of how the OSCS got into the heparin, and who should have been responsible for overseeing the purity and safety of the product. Despite the facts that clearly patients died from receiving this adulterated drug, no individual has yet suffered any negative consequence for what amounted to poisoning of patients with a brand-name but adulterated pharmaceutical product.

In 2010, we noted a report by the U.S. China Economic and Security Review Commission on the perils of outsourced drug manufacturing in China.

In 2012 we documented the continuing problems with outsourcing of drug manufacturing.  We noted that at least 70-80% of the "active pharmaceutical ingredients" (APIs) that made up drugs sold in the US were actually manufactured overseas, the majority in China and India.  The regulation of manufacturing in these countries, particularly China, is extremely lax.  In China, APIs are considered chemicals, and the regulation of chemical manufacture is virtually non-existent.  There is evidence that the manufacturing processes in China, particularly at those companies that make the cheapest drugs, are sloppy or worse.  Furthermore, US pharmaceutical companies may buy drugs through brokers, further obscuring who actually made them.


In 2013, we discussed adulteration of  generic drugs made in India by Ranbaxy, a subsidiary of Daiichi Sankyo, and sold in the US.

The latest cases of adulterated drugs sold in the US are disgraceful.  Patients ought to be assured that  the medications they take have not been adulterated.  Patients entrust pharmaceutical corporations to  supply pure drugs in the correct dosage.  The purpose of the first major US law to regulate drugs, the US Food and Drug Act of 1906, was to assure that drugs were pure and their dosage was accurate. The presence of adulterated drugs on pharmacy shelves is a major breach of trust, and shows a major failing of the involved pharmaceutical manufacturers and US drug regulation. 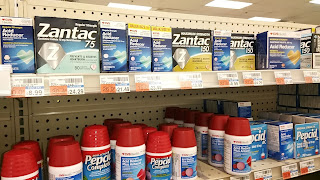 If anything, the NYT article understates the problem,

'I think this is another good example of how our regulations need to change,' said Dinesh Thakur, a drug-safety advocate who exposed widespread quality problems as a former executive at the Indian drug maker Ranbaxy Laboratories. He said the F.D.A.’s testing is too lax. 'Things like this will never get caught, unless somebody is actually actively looking for stuff.'


Since 2008 we have had warnings that outsourced drugs may be dangerous, and that foreign and US regulation is insufficient. Yet, the warning have largely been anechoic and no major action has ensued.  Will the new cases make waves?    Will there be action this time?  Who knows?

For what it's worth, let me resurrect my thoughts from 2016:

To repeatedly reiterate, as long as the leaders of health care organizations are not held accountable for the results of their decisions on health care quality, cost, and access (even in such extreme quality violations as those resulting in multiple patient deaths), we can expect continuing decisions that sacrifice quality, increase costs, and worsen access, but that are in the self-interest of the people making them.

To really reform health care, we must hold health care organizations and their leaders accountable (and not blame all the problems on doctors, other health care professionals, patients, and society at large).