Transparency International's Corruption Perceptions Index 2019: Political Corruption in the US Worsens, and Results are Largely Anechoic

Transparency International has just released its 2019 version of the Corruption Perceptions Index.  This version emphasized public sector corruption.  Once again, it appears the US has a worsening corruption problem.  Once again, the results are largely anechoic.

Per the TI summary

The CPI scores 180 countries and territories by their perceived levels of public sector corruption, according to experts and business people. 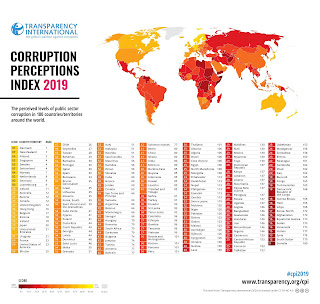 TI designated the US as a country to watch, with the following explanation:

With a score of 69, the United States drops two points since last year to earn its lowest score on the CPI in eight years. This comes at a time when Americans’ trust in government is at an historic low of 17 per cent, according to the Pew Research Center.

The US faces a wide range of challenges, from threats to its system of checks and balances, and the ever-increasing influence of special interests in government, to the use of anonymous shell companies by criminals, corrupt individuals and even terrorists, to hide illicit activities.

While President Trump campaigned on a promise of 'draining the swamp' and making government work for more than just Washington insiders and political elites, a series of scandals, resignations and allegations of unethical behaviour suggest that the 'pay-to-play' culture has only become more entrenched. In December 2019, the US House of Representatives formally impeached President Trump for abuse of power and obstruction of Congress.


The report emphasized that many countries, including the US, had increasing problems with political integrity:

Sixty per cent of countries that significantly improved their CPI scores since 2012 also strengthened their enforcement of campaign finance regulations.

In addition, when policy-makers listen only to wealthy or politically connected individuals and groups, they often do so at the expense of the citizens they serve.

Countries with broader and more open consultation processes score an average of 61 on the CPI. By contrast, where there is little to no consultation, the average score is just 32.

A vast majority of countries that significantly declined their CPI scores since 2012 do not engage the most relevant political, social and business actors in political decision-making.

Countries with lower CPI scores also have a higher concentration of political power among wealthy citizens. Across the board, there is a concerning popular perception that rich people buy elections, both among some of the lowest-scoring countries on the CPI, as well as among certain higher-scoring countries, such as the United States.

At least the 2019 CPI got some attention in 2020, as did the 2017 version (look here).  I found articles briefly summarizing the US results in a few US media outlets: Bloomberg (behind a paywall), the Associated Press (here, via the New York Times), and Forbes. There was also one op-ed, again in the WaPo.

This was some improvement from how previous relevant results from TI research were covered earlier.   There was virtually  no coverage of a 2013 survey that showed 43% of US respondents believed that US health care was corrupt.

One could argue even so that the current coverage of the 2019 report was inadequate given the importance of the topic and the apparent worsening of the US corruption problem.  This lack of coverage inspired me to write this post, in the hopes of making the issue just a little less anechoic

We have argued again and again that health care corruption is an important reason for US (and global) health care dysfunction.  As we wrote in 2019,  Transparency International (TI) defines corruption as

In 2006, TI published a report on health care corruption, which asserted that corruption is widespread throughout the world, serious, and causes severe harm to patients and society.


the scale of corruption is vast in both rich and poor countries.


Corruption might mean the difference between life and death for those in need of urgent care. It is invariably the poor in society who are affected most by corruption because they often cannot afford bribes or private health care. But corruption in the richest parts of the world also has its costs.


The report got little attention.  Health care corruption has been nearly a taboo topic in the US, anechoic, presumably because its discussion would offend the people it makes rich and powerful. As suggested by the recent Transparency International report on corruption in the pharmaceutical industry,


However, strong control over key processes combined with huge resources and big profits to be made make the pharmaceutical industry particularly vulnerable to corruption. Pharmaceutical companies have the opportunity to use their influence and resources to exploit weak governance structures and divert policy and institutions away from public health objectives and towards their own profit maximising interests.


Presumably the leaders of other kinds of corrupt organizations can do the same.

When health care corruption is discussed in English speaking developed countries, it is almost always in terms of a problem that affects some other places, mainly  presumably benighted less developed countries.  At best, the corruption in developed countries that gets discussed is at low levels.  In the US, frequent examples are the "pill mills"  and various cheating of government and private insurance programs by practitioners and patients.  Lately these have gotten even more attention as they are decried as a cause of the narcotics (opioids) crisis (e.g., look here).  In contrast, historically the US government has been less inclined to address the activities of the leaders of the pharmaceutical companies who have pushed legal narcotics (e.g., see this post).

However, Health Care Renewal has stressed "grand corruption," or the corruption of health care leaders.  We have noted the continuing impunity of top health care corporate managers.  Health care corporations have allegedly used kickbacks and fraud to enhance their revenue, but at best such corporations have been able to make legal settlements that result in fines that small relative to their  multi-billion revenues without admitting guilt.  Almost never are top corporate managers subject to any negative consequences.

We have been posting about this for years at Health Care Renewal, while seeing little progress on this issue.  Now the problem appears to be getting worse in the US.  We have argued that a major reason is the miasma of corruption now surrounding the top of the US government, specifically the Trump administration (see again this 2019 post).

Now the TI discussion of its 2019 Corruption Perceptions Index points to increasing problems of public sector corruption in the US. Many of the issues it cites have been discussed on Health Care Renewal, including: problems in "campaign finance regulation" and "perception that rich people buy elections" (see our discussion of dark money); and "policy-makers [who] listen only to wealthy or politically connected individuals and groups" (see our discussion of the revolving door and regulatory capture).

The op-ed by Hough in the Washington Post included this parallel discussion:

First, successful anti-corruption policy centers on transparency and accountability. Reports such as this one by the UNDP make a strong case that clear lines of accountability improve the quality of governance, and sharpen attempts to fight corruption. Openness and transparency also need to be default settings. These are both areas where the U.S. could improve. The tone set by Donald Trump, whether by refusing to publish his tax returns or personally profiting from his position as president is indicative of a much broader problem. Neither transparency nor accountability are ever absolute, but analysts find plenty of scope for the U.S. to improve.

Second, the more opaque and complex the relationship between money and power, the more difficult it is to pinpoint and counteract corrupt relationships. Again, getting this right is not an exact science — and there’s no perfect system for funding political activity. But campaign finance, along with lobbying, are what corruption scholar Michael Johnston calls influence markets — areas where the wealthy can trade money for influence on policy outcomes. In other words, the rules and regulations let rich benefactors buy themselves a hearing. Yes, there are countries in worse positions, but that doesn’t hide the fact that the U.S. is also far from a model pupil.

And third, fewer Americans now trust either the politicians that rule them or indeed the institutions that help shape public life. Successful anti-corruption is built around integrity management, which requires public servants to act in appropriate ways — but also be seen acting in such ways. The highest ethical and moral standards — and transparency about potential conflicts of interest and recognizing when personal and public interests clash — would let U.S. citizens begin to believe that a cleanup of American government was underway.


In summary, there is growing evidence of a worsening corruption problem in the US.  As of today, responses to it have been ineffective.  Political corruption, especially at the top of the US government, makes addressing health care corruption increasingly difficult.

But even if we can take that step, when the fish is rotting from the head, it makes little sense to try to clean up minor problems halfway towards the tail. Why would a corrupt regime led by a president who is actively benefiting from corruption act to reduce corruption? The only way we can now address health care corruption is to excise the corruption at the heart of our government.

It is now over three years since Trump was inaugurated, and there has been no real progress.  The fish is still rotting, and so is health care.  What will it take to make something happen?