("Kindler's list" metaphorically representing the list of people at Pfizer/Wyeth who will lose their jobs in mass layoffs, and perhaps much more, the stress of losing a job being like the stress of a death in the family or a divorce. These layoffs come at a time of the most severe economic downturn since perhaps 1929, due to merger mania itself necessitated by mismanagement. This is as opposed to Schindler's list, a list of people who were saved by someone actually willing to give them jobs.)

At "Pfizer/Wyeth Merger And Sacrificing The Future: Laying Off Scientific Staff All Over The Place" I commented on the futility of a large pharma merger led by two pharma leaders lacking biomedical experience and credentials. My reasoning was on the basis of the merger being unlikely to repair the organic problem in the industry, mismanagement of R&D by generic managers. I opined that:

Management in the absence of domain expertise in this industry is, in fact, mismanagement.

In my local paper today I discover the former top lawyer for McDonald's has become a surgeon:

Pfizer says the time is right for Wyeth deal

The CEO said his team had made changes for a careful integration. Still, analysts are split on its success.

By Linda A. Johnson
Associated Press

Jeffrey Kindler has spent two years transforming Pfizer into smaller, entrepreneurial research and marketing business units, making the companies easier to combine, he said in his first in-depth interview since the deal was unveiled Jan. 26.

And, just how does a fast food company lawyer with no biomedical domain expertise "transform" a multinational pharmaceutical organization into anything but ... ground meat?

With regard to "analysis", such a term sounds more like the rhetoric of a Bernard Madoff or other Wall Street Master of the Universe than from someone running an incredibly complex, intricate pharmaceutical company, one of the world's largest.
In a typically excellent post at Corante: In The Pipeline entitled "Opportunity Costs", medicinal chemist and blogger Derek Lowe points out just a few of the complexities of such a merger:

... I’d imagine that things have slowed down a great deal. No one knows what the future will be like, what parts of the company will stay, and which people will be asked to stay with them. How do you make plans under those conditions? For many people, the project they’re working on is now very much a secondary consideration.

Even outside the personal level, there are a lot of paralyzing influences. The same uncertainties about individual jobs apply to development projects. Some of what Wyeth is working on surely overlaps with what Pfizer’s already doing. So which project goes forward? Not both of a matched set, that’s for sure. There are some projects at both companies that are dead in the water, but no one can be sure which ones, and no one will know for some time to come.

That’s because you can’t really start ironing out these details until the deal goes through.

Legally, Pfizer and Wyeth are separate companies, and there are a lot of difficulties involved in sharing information in such depth. Even when that eventually happens, there are going to be plenty of other things to work out. Let’s say that Project Y from Wyeth looks to be in better shape than the corresponding Project Y-Prime from Pfizer, so it goes on through. Fine! But under whose rules does it proceed?

Every company has its own culture about these things – the criteria that are used to recommend a compound to the clinic, the ways those boxes are filled in, the sorts of people who have to sign off on them. A project caught in the middle can stall while all these details are cleared up, losing months (or even a year or two) in the process.

You can imagine the disconnects: you guys did check this compound for hERG activity, right? With what assay? And with what cutoff? That’s not the one we use, anyway; we’ll have to run it again, and get that signed off on by. . .hmm, well, by someone, we’ll figure out who’s in charge of that sort of thing soon, about the same time that we figure out who reports to them. Now, about your formulations work. . .you used what, again?

No, all this has a ferocious price, when you measure it in opportunity costs. The people caught up in all this could be doing something much more productive with their time, for sure. This sort of thing doesn’t show up on the books. And the longer the process drags on, the worse it’ll be.

I have been in an R&D support role in a large pharma and have seen what goes on in such an organization. Considering the credibility of many of today's Captains of Industry, believing all these details have been worked out seems to me to be more the belief of a fool than a rational being.

Coming from a former fast food company manager, I would say "Witch Doctor Medicine" sounds like the more appropriate term for the merger.

To be followed by massive indigestion. 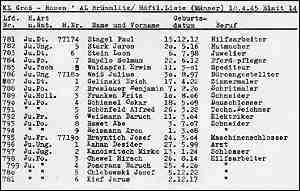 I extend my sincere sympathies to the many fine people on Kindler's List who will lose their livelihoods and perhaps more as a result of the experiments of a non biomedical "micro surgeon."
-- SS

Posted by InformaticsMD at 6:10 PM

You tell it like it is. I work in big pharma, and I know the issues.

I'm a sales rep for wyeth in australia and have never been so low. Noone knows anything here about our jobs. As sales reps our number one focus is being results driven so how can any of us be motivated to work when we probably wont be here to see our results. This sux big time