At posts "A very troubling post about the CCHIT" and "Is CCHIT Registered as a 501(c)3 in Illinois, And if Not, Where is it Registered, and Why Was it Involuntarily Dissolved in April 2008?", I questioned whether allegations by WSJ health blog commenter "CJ" that CCHIT was operating as an unregistered business after an involuntary dissolution (that occurred for some unknown reason on April 11, 2008) were true.

CCHIT is the Certification Commission for Healthcare Information Technology, an organization that "certifies" the computer programs doctors are being asked to use to replace paper order sheets and charts in patient care.

Today I received public documents from the Illinois Secretary of State's Dept. of Business Services that provide additional information. Click to enlarge. 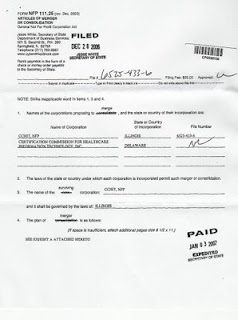 (click to enlarge)
In the document above we find that on Dec. 28, 2006, Articles of Merger or Consolidation were filed with the Illinois Secretary of State, Dept. of Business Services to merge "CCHIT, NFP" (an Illinois Corp). with "Certification Commission for Healthcare Information Technology, Inc.", a Delaware Corporation.

The name of the surviving corporation was CCHIT, NFP, to be governed by the laws of Illinois and called "Certification Commission for Healthcare Information Technology" per Article II of the merger (not shown).

This implies the Delaware registrations seen at the Delaware business lookup (link) were ended. They are still shown under file #'s 3859636 (LLC, formed 09/24/2004) and 4273859 (Inc., formed 12/21/2006) but current status is not shown on that site as in Illinois, and may be purchased. Considering the above document, I don't believe that to be very useful (unless someone forgot to tell Delaware about the above merger!) 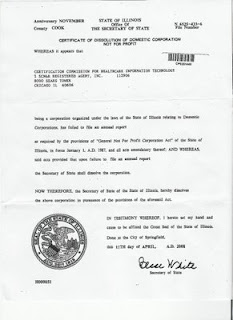 (click to enlarge)
In the document above dated April 11, 2008, we find the reason I sought in my prior posts for the "involuntary dissolution" of the Certification Commission for Healthcare Information Technology:

"Certification Commission for Healthcare Information Technology, being a corporation organized under the laws of the State of Illinois relating to Domestic Corporations, has failed to file an annual report as required by the provisions of "General Not for Profit Corporation Act" of the State of Illinois, in force January 1, A.D. 1987, and all acts amendatory thererof; AND WHEREAS, said acts provided that upon failure to file an annual report, the Secretary of State shall dissolve the corporation."

At the time I requested these documents on Tuesday Feb. 17, 2009, the day after the President's day holiday, CCHIT's status at the CyberDriveIllinois site was "dissolved." The two personnel I spoke with, one of whom took my request for the above documents, confirmed that status at that time: 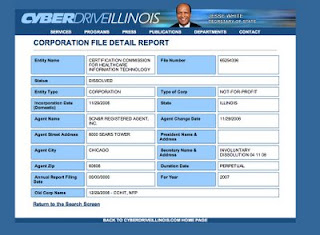 As best as I can tell from these documents, therefore, the Certification Commission for Healthcare Information Technology appears to have been operating as a nonentity (having been dissolved as a corporation) from April 11, 2008 and onward, apparently re-registering on or about Feb. 19, 2009, after the web controversy over registration began.

The CyberDriveIllinois site on that day changed to show CCHIT as "Active" with an Annual Report Filing Date of Feb. 19, 2009.


Being a physician and professor as well as a former Medical Review Officer in the public transit industry, I like to make sure my claims are documented, unlike some with HIT industry sponsorship who prefer speculation.

I note that in a response to my original Feb. 13 post on this issue "A very troubling post about the CCHIT" and at the WSJ health blog itself, CCHIT marketing director Sue Reber wrote:

The “facts” in the previous post are deliberate misinformation from an anonymous source ... CCHIT was founded originally as a LLC but has subsequently transitioned to a private, nonprofit 501(c)3 organization. That is its current status.

Perhaps Ms. Reber meant to write "that will be its current status once again after we make good on the required state paperwork ten months after we were involuntarily dissolved, after that fact became known through the 'deliberate misinformation' of an anonymous source."

Of course, I expect to now receive "yes, they were dissolved, but now they filed the papers, so big deal" comments from those with industry interests. One wonders if such folks would care if their personal physician "forgot" to renew their license to practice medicine. Physicians can go to jail for practicing medicine without a license. From one state:

Finally, these documents cost me $15. Do I have to pay taxes on the $15, or can I file papers to declare myself a nonprofit?

I will try to verify, and wish "CJ" would provide more information about who he or she is, exactly, but considering the above documents, I would not consider this additional claim unreasonable.

Posted by InformaticsMD at 4:33 PM