The National Program for Healthcare IT in the U.S., and the Elephant in the Living Room

The National Institute of Standards and Technology (NIST) has begun to address deficient clinical IT usability. A PDF with presentations on the topic from the recent NIST conference on HIT usability is here (warning: very large, 26 MB).

There is a critical "meta-issue" that's being ignored regarding usability, though, yet it is the elephant in the living room.

First, I will detail the elephant, then ask the simple, logical question that arises (the "inconvenient" question that nobody seems to be able to give a straight, non-marketing-spin answer to).

Here are the details of the elephant.

This is a first principle; it is not open to debate.

If NIST is just now getting involved in "improving HIT usability" (the improvement of which should have occurred at least two decades ago);

While HIMSS's former Chairman of the Board admits the technology remains experimental:

... We’re still learning, in healthcare, about that user interface. We’re still learning about how to put the applications together in a clinical workflow that’s going to be valuable to the patients and to the people who are providing care. Let’s be patient. Let’s give them a chance to figure out the right way to do this. Let’s give the application providers an opportunity to make this better;

While HIMSS itself admits in this 2009 PDF that

"Electronic medical record (EMR)!adoption rates have been slower than expected in the United States, especially in comparison to other industry sectors and other developed countries. A key reason, aside from initial costs and lost productivity during EMR implementation, is lack of efficiency and usability of EMRs currently available";

While the National Research Council (the highest scientific authority in the U.S.) last year reported that :

"Current Approaches to U.S. Health Care Information Technology are Insufficient" and that the technology "does not support clinicians' cognitive needs." The study was chaired by Medical Informatics pioneers Octo Barnett (Harvard/MGH) and William Stead (Vanderbilt);

While it's not just the user experience that's the problem, either...

While hospitals and vendors cannot yet manage the technology reliably - how many medical mistakes have/will occur as a result of screw ups like this one, now confirmed to have occurred at a religious-denomination hospital chain headquartered in the Great Lakes region of the U.S.?

This patient won't get a second chance, either.

The above issues are the elephant in the living room. Or, shall I say, in the Boardrooms and meeting rooms where health IT is planned and discussed? 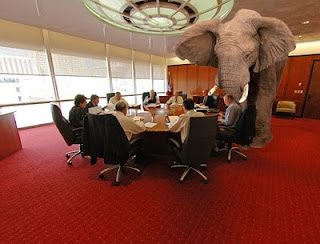 Health IT is great stuff, guys; it might actually work well one day!
Let's roll it out nationally and penalize those Luddite doctors
who refuse to "use it meaningfully" because it's not very usable.
Oh, just ignore that strange creature over there in the corner ...
Considering the size and weight of the elephant, here is my question:

Why are we rolling out this technology nationally under penalty of Medicare garnishment?

I cannot get a straight, unspun answer to that question.

Perhaps we need Bill O'Reilly to ask these questions of health IT officials on his FOX News program, The O'Reilly Factor, where spin is attacked relentlessly (the "No Spin Zone.")

It seems they are so eager to incorporate EMR's nationwide, even if the technology and usability isn't quite there yet.

Is there an audio track from the Usability Conference at NIST?

This was driven home to me again last night as I got a call from a friend regarding the loss of our FAA medical examiner. At the end of the Clinton administration the FAA, along with the various pilot organizations, agreed there was no medical reason for a Third Class Medical.

The AMA countered that eliminating this requirement would place a financial burden on the medical examiners. Apparently then, as now, we have doctors simply standing around a practice waiting for a patient to appear.

At the time there was serious questions asked, but with a wink and a nod and you received you’re medical. Today we are left with doctors who use this as a front end to endless testing and revenue enhancement.

My friend got caught up in this when the doctor did not like his prostate and he was referred to this doctor’s oncologist. (There are some real questions as to why this doctor found it necessary to address this issue.) Three ever increasingly aggressive biopsies later, and with no problems found, the oncologist declared he had cancer, but she could not find it. It then took two years for him to be able to get away from this doctor.

It is important to note that in the recent Mercy Medical/Aultman trial it was found Aultman was paying some doctors $25,000 each for exclusive referrals.

General aviation continues declining with a loss of pilots and aircraft in this country. While a Sport Pilot rating exist that requires no medical other than a driver’s license. The reality is pilots would need to sell the aircraft they have spent decades flying. Additionally they would need to spend over $100,000 to take advantage of this rating.

Today we are watching an entire sport and industry being destroyed because in the quest to generate revenue medicine cannot allow an endeavor to exist without taking its share.

Medicine, the industry, does not care about usability, product fitness, safety or medical necessity, only about increasing revenue.

While some sane minds in officialdom appear to start a long overdue exam of this anything but casual affair that is clinical usability, here's a perfectly laughable article from the ex-COO of a health informatics outfit.

The lame tripe polluting the real estate screen is a sight to behold.

The answers to some comments are the stuff to make one ROFL.

I didn't find that post all that unreasonable, except for its lack of attention to health IT risks.

I didn't review the comments, but I do take issue with this statement in the post:

Since computer technology has been able to bring about cost reductions in many instances, it is reasonable to assume that it can do the same for health care, particularly once a critical mass of interconnected systems is reached.

I think that this assumption is not reasonable (not even considering if the "cost reductions" are really true). It is in reality just a guess.

The assumption is ostensibly comparing business IT to clinical IT, two highly different subspecialties of computing. This difference is profound on many levels as I've written in many places. For all we know, after all is said and done, health IT will not reduce costs or increase quality. There's certainly enough evidence to support that possibility.

Further, those who fail to understand the distinction between business IT and clinical IT are doomed to failure in the latter, no matter how well they do in the former.

Basing $100+ billion of social re-engineering and experimentation on guesswork is not good social policy.