Meaningful Use Final Rule: Have the Administration and ONC Put the Cart Before the Horse on Health IT?

The Dept. of HHS today has released the final version of "Meaningful Use" rules on HIT, which can be seen here: Meaningful Use – Final Version Full Text.

By what category of diligence were the rules for "meaningful use" finalized on the same date that a NIST conference is being held on health IT "usability" ("Usability in Health IT: Technical Strategy, Research, and Implementation", http://www.nist.gov/itl/usability_hit.cfm), implying there's a problem with usability of these experimental devices physicians are supposed to "meaningfully use?"

Don't take my word on the issue of usability problems...

The National Research Council of the National Academies (considered the highest scientific authority in the U.S.) issued a 2009 report on HIT. In that report, presided over by noted HIT pioneers G. Octo Barnett (Harvard/MGH) and William Stead (Vanderbilt), were findings that current HIT does not support clinicians' cognitive needs as here:

WASHINGTON -- Current efforts aimed at the nationwide deployment of health care information technology (IT) will not be sufficient to achieve medical leaders' vision of health care in the 21st century and may even set back the cause, says a new report from the National Research Council. The report, based partially on site visits to eight U.S. medical centers considered leaders in the field of health care IT, concludes that greater emphasis should be placed on information technology that provides health care workers and patients with cognitive support, such as assistance in decision-making and problem-solving.

How about HIT industry trade/"educational" group HIMSS itself? I think reasonable people might conclude the technology is not ready for "meaningful use" on a national scale from their mid 2009 report:

EXECUTIVE SUMMARY
Electronic medical record (EMR) adoption rates have been slower than expected in the United States, especially in comparison to other industry sectors and other developed countries. A key reason, aside from initial costs and lost productivity during EMR implementation, is lack of efficiency and usability of EMRs currently available. Achieving the healthcare reform goals of broad EMR adoption and “meaningful use” will require that efficiency and usability be effectively addressed at a fundamental level. 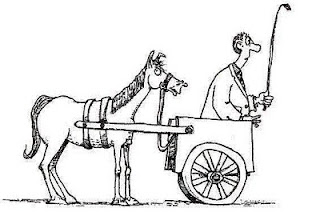 Something's very wrong here...
However, this situation is anything but humorous.

How more "cart before the horse" can government get?

Are we are entering an era of cybernetic medical assault on our patients (and perhaps criminal negligence and manslaughter, a term I do not use lightly) through irrational exuberance in computing -- and through exuberance about the profits to be made by the HIT industry?

Unless we slow down in our exuberance and recklessness on HIT diffusion, my fear is that we very well might be.

Also see my followup July 14, 2010 post "Science or Politics? The New England Journal and "The 'Meaningful Use' Regulation for Electronic Health Records."

Posted by InformaticsMD at 2:49 PM

Meaningfully unusable devices can not satisfy meaningful use because they promote errors, injuries, and death. Secretary Sebelius used the MU press conference to divert attention from the focus on lack of usability discussed at the conference.

I would add "meaningfully unregulated" (or perhaps "unmeaningfully regulated") to the list of clinical IT device issues.