SEEDIE, the Society for Exorbitantly Expensive and Difficult to Implement EHR’s, and commercialized VistA, the possible Linux of Health IT

While I have nothing to do with the following sites, they contain in a dark-humor sort of way a lot of truths about the current state of the commercial EMR vendor marketplace:

SEEDIE, the Society for Exorbitantly Expensive and Difficult to Implement EHR’s

I became aware of these sites when I presented this week at the 2nd WorldVistA Educational Conference at Robert Morris University in Pittsburgh. VistA is the VA's home-grown (over a few decades) EMR system, and is EMR the way EMR would have gone if the "medical industrial IT complex" had not intervened. VistA's source code is free, as it was developed via taxpayer dollars, and is being modified for commercial environments. WorldVistA's version is already in use in a number of sites in the US and in other countries and is perhaps the 1994-phase "Linux" of the HIT world.

WorldVistA was formed to extend and collaboratively improve the VistA electronic health record and health information system for use outside of its original setting. The system was originally developed by the U.S. Department of Veterans Affairs (VA) for use in its veterans hospitals, outpatient clinics, and nursing homes. WorldVistA has a number of development efforts aimed at adding new software modules such as pediatrics, obstetrics, and other functions not used in the veterans' healthcare setting.

I consider this growing open-source HIT movement fascinating. I believe that growing problems and dissatisfaction with commerical EMR's and more importantly, business IT culture as parodied in the Seedie/Extormity links above may seriously delay the spread of effective clinical IT, or even kill current enthusiasm for clinical IT altogether.

I also believe the unimaginative, process over results, tightfisted control, bureacratic "data-processing" culture of the business IT (management information systems) world to be the lineal descendant of IBM's patchcord plug-panel programmed, card tabulating machines from which IBM made a large portion of their profit in the days before the electronic computer. You perhaps required such a culture when you were running huge businesses from stacks of tens of thousands of punched cards. However, such a model does not work well in meeting the information needs of clinical medicine. 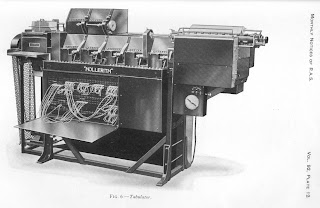 (These machines also help explain why the ENIAC, the behemoth characterized as the first fully electronic computer, was programmed with patchcords. The paradigms of the electromechanical tabulators were reproduced with the much faster vaccuum tube technology. )

Medical informatics, a pioneering field, in many ways saw the electronic computer not as a card-based data processing machine but as a canvas for development of creative works to serve the needs of clinical medicine and its practitioners.

Severe delays in or abandonment of current HIT efforts due to expensive failures and lack of ROI would be a shame, because clinical IT at this point in time has finally attained the capability to provide the many benefits that have been promised about it for the past few decades - but only if done well -- and the definition of "well" in this context is a very long essay in itself.

At best while not a panacea, at worst clinical IT can and does impair the quality of care if done poorly, and wastes significant capital and expense that healthcare can ill afford.

Finally, my presentation at the WorldVista meeting entitled "Open Source and an End to Vendor Hegemony: Why This is Essential to HIT Success" is here (zipped Powerpoint).