EHR's and Scarcity of Public Reviews of the User Experience

I like its user experience and features, presenting a main page "posterboard" of most visited or user-selected sites, a searchable, flip-panel history of visited pages (using the Macintosh OS X Spotlight and Cover Flow paradigms), top located tabs, and other useful features. (Note: I use both Macs and PC's, and hold no financial stakes in Apple whatsoever.)

What struck me was the vociferous online discussions and debates about every facet of the new browser version, down to the level of minutiae. The following review particularly struck me for its level of detail - Observations, Complaints, Quibbles, and Suggestions Regarding the Safari 4 Public Beta Released One Week Ago, Roughly in Order of Importance by John Gruber. It includes minutiae such as this:

Safari’s new tab layout, placing the tabs directly in the window title bar, is a radical change. There’s no use addressing the specific details — good and bad — of this new arrangement, without first trying to figure out why Apple did this. Again, the designers are behind Apple’s wall of silence, so we’re left to speculate.

Rule out the notion that Safari’s designers undertook this change lightly. This is a major change to an important feature that many users feel strongly about. My guess is that this is an attempt to bring tabbed browsing to the masses. The biggest and most important change is that the interface for the tabs is now far more prominent. In fact, previously, the entire interface for tabbed browsing was not visible in Safari by default — in a window with just one tab, Safari’s default settings were such that the tab bar was not shown.

In Safari 4, there’s a prominent and unique “+” button that is always visible in the top right corner of every window, where the standard tic-tac button for toggling the display of the toolbar usually resides.1 Because the interface to create new tabs is now obvious, I can only assume that the point of this redesign is to encourage more people to use, or at least try, tabbed browsing.

But the problems with this new tab layout are significant.

Conceptually, the basic idea is sound. Browser tabs are, effectively, a collection of separate browser windows grouped together in a single parent window. Safari’s new tab layout makes this a tab is like a sub-window metaphor more explicit. The anchor, the conceptual root, of a standard Mac OS window is the title bar, and in Safari 4, the tabs aren’t just in the title bar, they are the title bar ...

Etcetera and so forth, on and on, as in other reviews easily found online.

In Electronic Health Records and other clinical IT, by way of contrast, reviews at this level of detail are ... nearly nonexistent (I use the term "nearly" because I authored such a review, in general terms, starting here). One reason EHR and other clinical IT user experience and performance debates are so rare is because customers are contractually forbidden to engage in them publicly. Koppel's and Kreda's JAMA paper makes that clear:

Vendors claim they are protecting their "intellectual property." I'm not exactly sure what IP they are holding as closely as the crown jewels.


In other words, what, exactly, is being protected by shielding commercial EHR's from external scrutiny and debate? 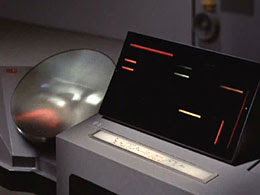 Is this the Secret Sauce the commercial EHR vendors seek to conceal?
The loss engendered by such policies is the reduced feedback from, and reduced interaction among endusers. This interaction occurs commonly on the Internet in 2009 on a great number of topics, but EHR user experiences are not one of them.

Companies like Apple and Microsoft, strongly user centric, encourage such debates through release of their beta's, both of enduser tools and of operating systems e.g., Windows 7 Beta. I should note that with these pieces of software, lives are not at stake, unlike with electronic health records systems.

The Veterans Health Administration makes a full working copy of VistA Computerized Patient Record System (CPRS) available as a free public download to anyone in the world here. I use it in my teaching (and am forced to do so, as commercial EHR demos are as available as, say, demos of the National Security Agency's spy and decryption software).

What, exactly, is the commercial EHR vendors' real excuse for the levels of product secrecy they maintain?

Could it be embarrassment and fear of exposure of defects, ill conceived design features and a mission hostile user experience?

I have seen over 50 different EMR/EHR products and they are not created equal. I will add this to our http://FreeEMRsolution.com website as this is an important fact to consider prior to selecting an emr product. Keep up the informative articles, the medical community needs them.

I have posted this as an EMR article on http://freeemrsolution.com. Great information. The docs need to know this stuff.