At The Economist, an online "debate" entitled Health 2.0 has been posted (link). It poses a debate between two experts.

In this case, the debate is between Peter Neupert, Corporate vice-president, Microsoft Health Solutions Group, vs. Deborah Peel, MD, Founder, Patient Privacy Rights and leader of the Coalition for Patient Privacy.

The readers are asked to vote upon whether they agree or disagree with this statement:

This house believes that any loss of privacy from digitising health care will be more than compensated for by the welfare gains from increased efficiency.

Note the phrase "will be."

My response was as follows:

The premise of this entire debate is logically fallacious, in fact begging the question.

This statement implies proven or inevitable "gains" from health IT. This is far from certain.

Health IT such as electronic medical records systems and computerized order entry systems (CPOE) remain highly experimental medical devices. They are unregulated devices as well. Their effects on medical care can be toxic, and patients are exposed to these effects without informed consent. The "gains" attributed to them are increasingly doubted in a growing body of literature.

"Common examples of healthcare IT difficulties" at http://www.ischool.drexel.edu/faculty/ssilverstein/cases/

"2009 a pivotal year in healthcare IT"
at
http://www.ischool.drexel.edu/faculty/ssilverstein/cases/?loc=cases&sloc...

for exposure to some of this literature.

In essence, management information systems and other business computing-derived approaches, customs and traditions for software design, development and lifecycle have proven ill suited in healthcare. Clinical computing and business computing are conflated; yet, they are two fundamentally different subspecialties of computing.

Further, medicine is a scientific discipline, yet the approach to IT in healthcare has been nearly devoid of science and critical thinking.

Sacrificing privacy for a dream that may or may not be true is not good social policy.

In the aftermath of the latest Wikileaks disclosures, a scientific approach - such as assertions about the beneficence of IT in healthcare not being made without strong, robust scientific evidence and without consideration of the downside evidence not being proferred so freely - would be a fine start.

Consumers must trust that the organisations they are engaged with are accountable and will respect—and protect—the privacy of their data.

I find this remarkable in the context of repeated violations of "trust" I've noted at this blog such as at my posts:


Neupert's view is especially paternalistic and naive in the context of Wikileaks repeatedly and recently leaking hundreds of thousands of supposedly secure documents, stolen from U.S. intelligence by at least one known person and probably others. If the Pentagon and U.S. intelligence cannot keep information secure, how can lowly hospital IT departments?

... Supporters argue that health information technologies have advanced to the point that such [security] concerns are vastly overblown. After all, do not financial data flow freely and with little incident over digital systems? On this argument, any loss of privacy will be more than offset by efficiency gains. In arguing for the motion, Peter Neupert of Microsoft, a software firm, insists that digital medicine must be centred on the patient—rather than, say, the doctor or the insurer, as is often the case today [this 'centered on the patient' meme sounds good, but what exactly does it mean? - ed.] —and that medical information must be as mobile as the patient. If that is the case, he argues, it is not merely the efficiency of health systems that will improve but also the value of health care—and perhaps health outcomes too.

Note the statements of absolute certainty - "will be more than offset by efficiency gains", "will improve", etc. They remind me of the statements made in the NEJM by the Director of ONC, Dr. David Blumenthal, as I wrote at "Science or Politics? The New England Journal and The 'Meaningful Use' Regulation for Electronic Health Records":

On that I had commented:

Even though it is a "perspectives" article, I once long ago learned that in writing in esteemed scientific journals of worldwide impact, statements of certainty were at best avoided, or if made should be exceptionally well referenced. I note the lack of footnotes showing the source(s) of these statements.

The meme of technological determinism, that computerization in medicine is synonymous with, and will deterministically provide "improvements", no matter what the evidence, is quite concerning coming from a company as profoundly large and influential as Microsoft.

Further, the complete omission of consideration of the adverse clinical consequences (let alone mere information breaches) that may occur along the way to cybernetic utopia in healthcare is very disturbing. These are experimental medical devices, are unregulated, and are used without patient informed consent. Yet the IT industry seems to opine as if these systems are only to be used on experimental lab rats.

These systems produce "legible gibberish" of no clinical use to clinicians, but take clinician time to generate through distracting "clickorrhea." For example, just the placement of an IV and fluid infusion generates a half page of nonsense: 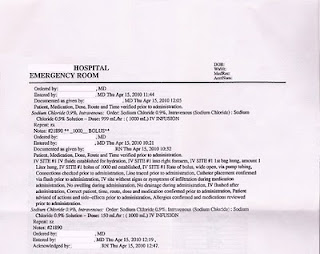 Actual "legible gibberish" from an ED EHR report, major health IT vendor. Half a page on how an IV was started and a saline infusion given. (How many distracting clinician mouse clicks did it take to produce this?) Click to enlarge.
Addendum 12/8/10 - From "Hidden Malpractice Dangers in EMRs", Steven I. Kern, Esq., Medscape.com:

... Pages of repetitive documentation can be more time-consuming to review than brief, handwritten notes. When important information is embedded in paragraphs of boilerplate, it can easily be overlooked. The chance of missing critical data increases.

Overlooking important information is, of course, a significant cause of malpractice. A positive finding embedded in a string of negative findings can easily be missed.

Ironically, my relative was injured as a result of EHR-related disruption not long ago. Further, just the initial two and a half weeks of hospitalization generated more than 2,800 laser printed pages of "legible gibberish" (which cost just under $1000 to obtain; Kinko's should only have it so good).

From: [redacted name of MD]
Good Lord! I am so sorry to see this and hope your Mom gets better. You must be furious.
May I add to the cacophony? My wife went to [another local hospital's] ER for emergency transfusion. Their Emr displayed someone else's info under her name & SSN. Had I not been there she would have received incorrect treatment.

My wife went to [yet another hospital] for hip replacement. After surgery, while she slept off her anesthesia, a nurse came in and started injecting her. I asked and learned it was insulin. I stopped the nurse (with difficulty). My wife's not diabetic. Her screen showed someone else's orders. Had I not been there she might have died.
So keep up the good work... please!

How many other patients have been injured or killed as a result of EHR's?

In fact, we really don't know how many adverse events related to EHR's occur. As the Joint Commission itself admits in its Sentinel Events Alert #42, Safely implementing health information and converging technologies: "There is a dearth of data on the incidence of adverse events directly caused by HIT overall." I further wrote on this issue in a paper "A Dearth of Data on Unintended Consequences of Healthcare IT" here.

Is this a proper environment for national rollout of these clearly experimental medical devices, one should ask?

The memes of technological determinism and health IT "white-as-driven-snow" beneficence seem as difficult as vampires to eradicate.

Yet if this technology is to achieve the benefits of which it is capable via remediation of current IT industry customs, traditions and practices, these memes must be challenged and defeated.

Regarding health IT in the real world, reality matters.

Posted by InformaticsMD at 10:30 AM

More and more and more clinical documentation is as totally useless, no even more importantly distracting, to the primary goal of health care.

This is no advance.