Electronic medical records in the pioneering years were about helping clinicians better understand a patient. They were about easing the clinicians' work in evaluating and caring for a patient, or in performing a consult on a patient being cared for by a colleague.

The commercial electronic medical record is another beast entirely.

Thanks the the imperative to document anything and everything to drive up billing, and due to the "computer as a data warehouse", early 20th century programmable card-tabulator culture of mercantile, manufacturing and management computing specialists (A.K.A. the MIS personnel in most hospitals and health IT vendor development shops), these systems have become a distraction and an error-promoting nightmare.

In the June 20, 2009 Wall Street Journal article "The Myth of Prevention", Abraham Verghese, Professor and Senior Associate Chair for the Theory and Practice of Medicine at Stanford, echoed several Wharton professor's doubts about the cost savings and ultimate value of electronic medical records, touted as the cybernetic savior of healthcare:

... the complaints I hear from patients, family and friends are never about the dearth of technology but about its excesses. My own experience as a patient in an emergency room in another city helped me see this. My nurse would come in periodically to visit the computer work station in my cubicle, her back to me while she clicked and scrolled away. Over her shoulder she said, “On a scale of one to five how is your ...?”

The electronic record of my three-hour stay would have looked perfect, showing close monitoring, even though to me as a patient it lacked a human dimension. I don’t fault the nurse, because in my hospital, despite my best intentions, I too am spending too much time in front of the computer: the story of my patient’s many past admissions, the details of surgeries undergone, every consultant’s opinion, every drug given over every encounter, thousands of blood tests and so many CT scans, M.R.I.’s and ultrasound images reside in there.

One of the reasons he and other physicians are spending too much time in front of the computer is because the computer EMR application is poorly engineered, presenting a mission hostile user experience and characterized by "clickorrhea" in order to navigate the perfect storm of informational disarray and chaos. The systems also cannot support clinician's cognitive processes properly, as was the original intent of these systems (See, for example, the 2009 National Research Council report on health IT.)

Another is due to the computer technician and billing department's fetish with massive detail.

All of these issues are easily illustrated via one picture:

Two weeks of hospitalization of one patient generated about 1000 pages, or two reams of paper (one ream = 500 pages, as sold at office supply stores everywhere) that another physician who sent this photo needed to wade through: 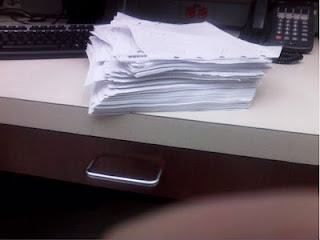 The content of these reams, rather than being learned medical prose, is what can be more accurately referred to as "legible gibberish." These "records" have all the fluency of a computer programmer's grasp of Shakespeare, or, as one commenter here colorfully put it, "cloistered coding gnomes."

It could have been worse. In the case of a relative, just over two and a half weeks of the initial phase of their hospitalization for an EMR-caused medical catastrophe generated approximately 2,900 pages of legible gibberish - six reams (or three reams, double-sided) for which I had to pay about $1000 to obtain.

This 'paper-orrhea', needless to say, is reckless and a medical information science absurdity. It is crazy stuff.

... Anyone who thinks these systems in their present form benefit clinical medicine needs to have their head examined. Preferably, by a psychiatrist not suffering from irrational exuberance himself or herself, and not taking notes into a computer facing away from the examination couch.

Addendum: it occurs to me I may have selected the wrong body part for examination. Those who gleefully and uncritically push this experimental technology for national rollout, even in the face of literature such as I aggregated at "An Updated Reading List on Health IT", perhaps (metaphorically speaking) should have the contents of their hip pocket or purse examined: 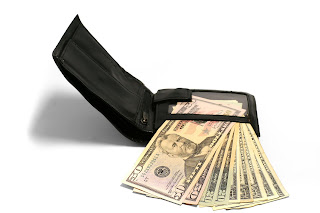 Email ThisBlogThis!Share to TwitterShare to FacebookShare to Pinterest
Labels: healthcare IT difficulties

Evidence based medicine has become the mantra of the decade.

These reports shine light on the etiology: The EMRs are sufficiently user unfriendly that they become the patient in need of detailed attention while the real patient is neglected.

Congress was educated by the HIT vendors and their trade groups and decided to transfer wealth to these vendors. This represents a heist on the country on a scale more grande than being Madoffed.

Live it or live with IT said...

Maybe the lawyers think that they are in charge of treating patients? Maybe you doctors should get smart and bill by the hour too!

And that is exactly the point that is made here over and over again.

Every doctor I know uses those devices BECAUSE THEY WORK. The federal government is not having to subsidize anyone to the tune of $44,000 to get them to but a smart phone.

Good products sell themselves. As of now, EMRs are not good products.

Evidence based medicine has become the mantra of the decade. FACT: The evidence shows that EMRs do not improve patient safety, do not improve outcomes, and do not reduce costs.

While the literature is mixed (even excluding those without obvious conflict of interest), a corpus such as I documented at my "updated reading list on health IT" to my eye does not support a national experiment with health IT at this time.

Live it or live with IT wrote...

You have an undeniable point there. Except, in the latter, the informational cornucopia and disarray can produce a slow societal decline; in the former, sudden -- or slow and lingering -- patient death.

Maybe the lawyers think that they are in charge of treating patients?

An interesting point, even if in jest, as I've often referred to s "territorial inversion" where IT personnel think -- and act -- as if they were the enablers of healthcare provision, not simply facilitators. And my observation is not in jest.

Maybe you doctors should get smart and bill by the hour too!

In fact, perhaps they should.

And that is exactly the point that is made here over and over again. Every doctor I know uses those devices BECAUSE THEY WORK. The federal government is not having to subsidize anyone to the tune of $44,000 to get them to but a smart phone. Good products sell themselves. As of now, EMRs are not good products.

The original statement was logically fallacious and distracting rhetoric; the writer knew it.

It's the "Luddite" argument in another not-so-subtle facade.