Brilliant computer innovators may not be so brilliant in all domains.

It is well known, and well documented for many decades, that pancreatic cancer is often extremely aggressive and detected relatively late due to lack of early symptoms.

Its detection should lead to aggressive treatment ASAP, such as radiation/chemotherapy or the Whipple procedure, if the person is to survive.

I consider this tragic:

... His early decision to put off surgery and rely instead on fruit juices, acupuncture, herbal remedies and other treatments — some of which he found on the Internet — infuriated and distressed his family, friends and physicians, the book says. From the time of his first diagnosis in October 2003, until he received surgery in July 2004, he kept his condition largely private ... Mr. Jobs put off surgery for nine months, a fact first reported in 2008 in Fortune magazine.

(Per Yahoo finance) ... he also was influenced by a doctor who ran a clinic that advised juice fasts, bowel cleansings and other unproven approaches, the book says, before finally having surgery in July 2004.

I would replace the term "doctor" above with the onomatopoeia imitating the noise made by females of the species Anas platyrhynchos.

Medical mysticism and "alternative therapies" may have their place, especially in hypochondriacs and for relatively minor problems (in my view, via the placebo effect), but not in dire, well studied conditions such as cancer of the pancreas. A brilliant computer entrepreneur, one of the world's best, may have been unnecessarily lost due to the seduction of medical mysticism.

In such diseases, sadly, an Apple a day does not keep the doctor - or the grim reaper - away.

This story has a personal angle of sorts to it. In the early 1970's when I began my fascination with computers, I became friends with Hank, a brilliant computer programmer and fellow ham radio enthusiast, shown stting in this picture from the George Washington High School (Phila., PA) 1973 yearbook in front of our high school's DEC PDP-8/S: 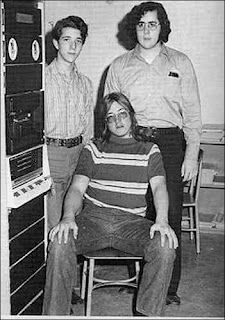 Hank had a distrust of medicine. I last saw him when I was in Residency, when he visited my home to see my ham radio setup. He became a programmer working on military weapons systems, the B1B bomber I was told. I was told this, unfortunately, at his funeral just a few years ago. He'd developed a severe respiratory infection and tried to "tough it out."

He died at home, apparently of pneumonia. A few dollars worth of antibiotics would probably have saved him. At the funeral, his friends told me he spoke occasionally of his former computer friend who'd gone into medicine. I was quite sad at his funeral. All he'd needed to have done would have been to call me. I'm sure I could have talked him into treatment.

The late Steve Jobs had an idiot for a doctor and a fool for a patient.

There are illusions similar to Jobs' bone headed beliefs that are pontificated by HIT leaders that are comparable to the herbs, roots, and juices Jobs thought would cure his cancer.

The HIT vendors are selling the roots, herbs, and juices as the cure for the problems in health care.

This homeopathic therapy for health care will meet the same fate as Jobs' root, herb, and juice therapy for his cancer.

It will not work.

But unlike the Jobs apple a day outcome that enabled his premature death, the HIT vendors' root, herb, and juice cure (for the non metaphorical readers, CPOE and CDS=roots, herbs, and juices) is killing many people who were actually well before being subjected to the adversity of this homeopathy.

This comment turned out better than I thought it would when I first started writing it.

There was nothing exotic at all about what Jobs did to himself. It was sheer stupidity. If his parents did that to him when he was a child, it would be considered child abuse.

He was a pathetic chap, undoubtedly, to do that.

If there was a real cure for cancer, imagine all these people in the Cancer Industry, out of work . So there is no cure. They just pump you up with a lot of despicable medicines, and you die a slow and miserable death. I've seen enough in my own family, & I think Steve jobs left this earth with respect and dignity, and is a real Hero.

Patrick Swayze passed away Monday at the age of 57, but his 20-month battle with pancreatic cancer showed how tough the disease is -- and how unusual it is for people to survive with it as long as he did.
When Swayze was diagnosed, he was given a few months to live.
"The median survival is probably five months," said Dr. Lucas Wong, co-director of the gastrointestinal cancer program at Scott & White Memorial Hospital & Clinic in Temple, Texas. Wong's assessment was confirmed by several other oncologists who work with pancreatic cancer patients.
Wong said that five months represents the median survival time, so half of all patients would be expected to live beyond that time. In Swayze's case, other factors would suggest he would outlive five months.
For one, Swayze really seemed to benefit from his regimen of chemotherapy, typically administered to pancreatic cancer patients in a drug called gemcitabine.
"There are people who do better than others, even those with advanced disease," said Dr. Suresh Chari, a gastroenterologist specializing in pancreatic cancer at the Mayo Clinic. "Almost all chemotherapy agents ... do benefit some subset of patients."

When your time is up, it is up, with all of your pennies or billions.

The medical field is broken; it does Not work the way they advertise in commercials .

You clearly have not done your background research, and you provide useless information.

In the days when that meant a trip to an academic medical library, this could be excusable; in the age of the internet, it is not.

You left out witchcraft, arsenicals, warm blankets for fever and infections, and bloodletting.