ONC's "Health Data Palooza" - A Title of Exceptionally Bad Taste, For a "See No Evil" Meeting

The Office of the National Coordinator of Health IT has sent out this announcement:


Hear from Farzad Mostashari, National Coordinator for Health IT on data liberation
ONC will host breakout sessions on Consumer e-Health, HealthData.gov,
and Uses of Data by ACOs
ONC will release nine challenges during this year’s event!

This title for a government-sponsored meeting is bizarre and tasteless in my opinion.  What is deemed by ONC to be the major source of this data?  Health IT.

What about "patient liberation" -- from risk?

Considering it unlikely that issues in the bulleted points below, commented on in detail in past posts on this blog, will be discussed at this meeting, the title of the meeting is especially tasteless:

Health IT and health data issues are not 'partying' affairs. An un-seriousness about anything related to health IT seems in vogue of late.

Finally, I ask:  does this "Health Data Palooza" bring my Ddulite term to life?

Ddulite: Hyper-enthusiastic technophiles who either deliberately ignore or are blinded to technology's downsides, ethical issues, and repeated local and mass failures.


A Ddulite Palooza.  How charming.

Like the recent extravagances of other government agencies such as GSA in Las Vegas and the Secret Service in Colombia, let's hope this Data Palooza is a Palooza in name only.

In light of those recent scandals, calling a government sponsored meeting a "Palooza" seems inappropriate on that basis as well.

A commenter pointed this flyer out: 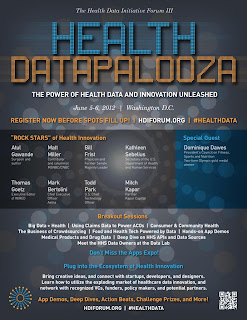 Mostashavi is a good dancer. But, for too long, the Congress, the POTUS, the HHS, and the ONC have been dancing around the reality that the devices they are promoting and on which they are spending $ billions just do not work as dreamed.

It is worse than that, however. They cause deaths and injuries in numbers that mey be far higher than these officials and the vendor CEOs desire to know.

So go ahead, keep dancing at the Palooza, but don't shut me up and cut me off when I ask you questions.

Be sure that Secretary Sebelius is open for q and a.

The link below may better serve this meeting, representing what doctors are really dealing with when trying to come to terms with EMR’s.

Hoping that LIEber of HIMSS will attned and dance in his red pumps.

Getting serious now, what is wrong with calling a government gig a palooza? After all, what did the secret service call their soiree?

This is an attempt to vent their anxiety and frustration with the abject flaws and defects in the devices they espouse.

It is a depreciation of the significance of the problems...all part of the illusion and sham being played on the taxpayers and patients.

The link below may better serve this meeting, representing what doctors are really dealing with when trying to come to terms with EMR’s. http://wingofzock.org/2012/05/07/the-electronic-medical-record-doesnt-tell-you-the-story/

What the author's describing is what I've called the "inventory system of widgets"-style information system masquerading as a medical chart.

As in law, it takes years to learn how to create clinically useful and excellent documentation.

The current EMR fads seem to discount that reality, in yet another sign of the debasement of medicine.

This seems like a conference for these folks to pat themselves on the back and provide a dog and pony show to the naieve attnedees.

Most of the data that show up on the EHRs that I use is nothing but gibberish. The alerts are bogus. The data is in unreadable format. Medication reconciliation is nearly impossible. The systems are not usable.

They can not even keep up with the doctor requests for opt out on the e-prescribing experiment.

This is the JP MOrgan of the health industry: wasting billions $ in a risky experiment aka palooza for the HIT vendors.

It behooves the ONC to sober up after the palooza and deal with the rash of deaths and imjuries associated with the devices they are trumpeting.

Given past behavior, uncorrected, what would you expect?

The "confirmed speakers" are listed as "Rock Stars of Health Innovation" on the Flier linked here:

Unbelievable. I am adding the graphic to the posting.

I presume our taxpayer dollars paid for its design. It looks too good for a government operation.

The federal government's healthcare leader touted the Obama administration's initiatives to help spur health IT innovation and urged more technological breakthroughs at a gathering of technology professionals in Washington.

HHS Secretary Kathleen Sebelius chronicled the various federal initiatives in recent years aimed at encouraging the widespread adoption of electronic health records, including the 2009 enactment of a $27 billion EHR incentive program. “Two years ago, the health data initiative began with 25 people in a conference room brainstorming for a vision about how better to improve the health of Americans,” Sebelius said. “We knew we had a limited role to play in making the vision a reality.”

Since then, the federal government has served as a “convener” and “catalyst” for health technology entrepreneurs to develop the tools needed for widespread transition to electronic health data.

Among the signs of progress toward widespread use of electronic health data that Sebelius cited was an increase from 25 applications submitted at the first federal health data initiative to nearly 250 applications submitted in the latest one. “Most importantly, we have begun to see some of those innovations make a real difference in the lives of millions of Americans across the country,” Sebelius said. Her department has been touting such developments in recent weeks.

Sebelius expects further rapid expansion in EHR use by providers, as well as more health applications tailored for use on smartphones and other emerging platforms. “We're committed to giving entrepreneurs even more fuel by making more data available, while maintaining absolute protections on patient privacy,” Sebelius said.