My Presentation to the Health Informatics Society Of Australia: "Critical Thinking on Building Trusted, Transformative Medical Information: Improving Health IT as the First Step"

In early 2011 I was invited to present at the annual convention of the Health Informatics Society of Australia (HISA) by its CEO, Louise Schaper, PhD.  HISA was aware of my writings and thought a presentation at their conference would be of interest to the Australian informatics and healthcare governance community.

I trust this email finds you well and I hope spring is bringing you some warmer weather and cheer.

I wanted to let you know that the Health Informatics Conference committee met recently and expressed a high level of interest in having you deliver a keynote address at HIC and also to form part of a panel presentation.

I know you may not be able to make a commitment to come to Australia in August, but I wanted to let you know what we would love to have you, if circumstances permit you being here.  I’m confident we could have your trip sponsored (providing you don’t mind spending some face-time with the sponsoring organisation) and generate some media coverage around your visit.

The preliminary program will be advertised in the next few weeks and at the moment I’m leaving a ‘spot’ for you in the hope that you may be able to join us.  I know you are in difficult and upsetting circumstances so please know that I’m not intending to add to any pressure – I just wanted to let you know that we would be honoured if you are able to deliver an address at HIC this year and I will keep a speaking spot reserved for you if you think you may be able to accept our invitation.

Thanks for your time Scot.  I look forward to hearing from you.


Sadly, the "difficult and upsetting circumstances" she mentioned were my involvement in caring for my mother, seriously injured in May 2010 in a healthcare information technology-related medical misadventure and, by this time, dying.

I was thus unable to attend.

In January 2012, Dr. Schaper was gracious enough to re-invite me to the annual 2012 conference in Sydney.  I accepted.

My powerpoint slides for the presentation entitled "Critical Thinking on Building Trusted, Transformative Medical Information:  Improving Health IT as the First Step" are at this link.

Australia has embarked on a national Personally Controlled Electronic Health Record (PCEHR) project under the auspices of Nehta, the National E-Health Transition Authority.  I find this an interesting approach to national health IT; unlike the U.S., whose project is top-down (centrally controlled records), Australia seems to have learned from our mistakes and is initiating health IT as a bottom-up (patient-controlled) initiative.

At the conference last week, I delivered a keynote address on the theme of improving health IT as an essential step in leveraging the capabilities of the technology.

Being that I am anti-"bad IT" and pro-"good IT", implicit in my address was the issue of the technology's untrustworthiness in 2012, largely due to the unregulated free-for-all its market represents and the poor engineering that is the result.


I will highlight several key points I made in my keynote and on the panel:


I then posed a series of questions of great relevance to understanding health IT realities.  Click to enlarge: 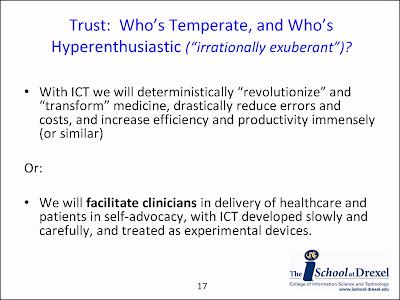 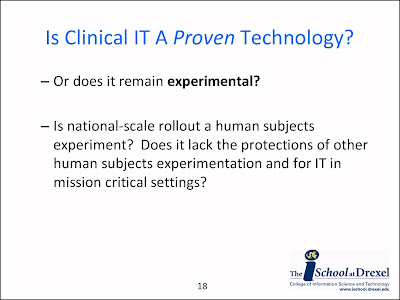 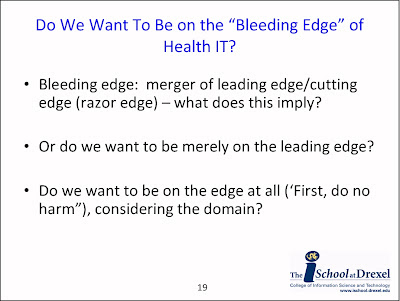 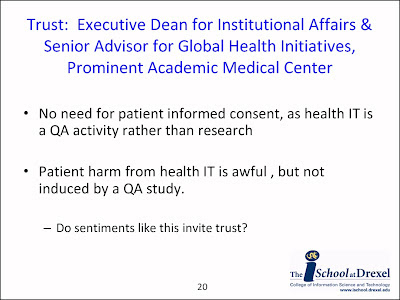 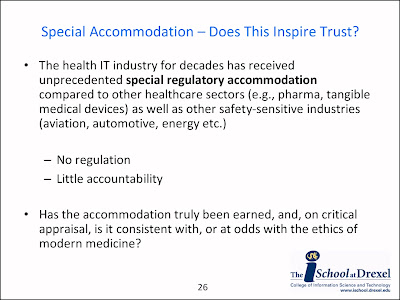 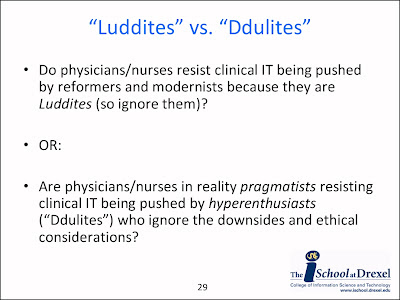 I left it to the audience to answer these questions.

I then posed the question "Is health IT being done well?"

I provided links to various evidence that it was not, such as the National Research Council 2009 report on health IT; AMIA's report on its workshop on healthcare IT failure, the 2012 U.S. IOM report on safety, the 2012 U.S. NIST report on usability, work by Australian Professor Jon Patrick of U. Sydney on health IT defects, and other sources as aggregated at this link.

Again, I did not impose views on the audience.  I didn't need to, as that corpus speaks for itself.

I also clarified terminology that reduces essential caution, such as the terms "electronic medical record" (EMR) and "electronic health record" (EHR) - a source of endless, wasted contention on definitions of which is which - being anachronisms from an earlier age of IT.  I pointed out that in 2012 what these innocuous terms somewhat deceptively and disarmingly represent are in reality complex enterprise clinical resource management and clinician workflow control systems – where many, many things can go wrong.


I asked if case reports of health IT unintended consequences (UC’s) were “anecdotal” and to be played down, while studies of health IT benefits to date solid science.  I then asked if the reality might be that studies of health IT benefits to date were mostly anecdotal (e.g., in specialized settings; weak observational studies vs. randomized clinical trials) while reports of UC’s are risk management-relevant incident report “red flags” pointing to possible systemic problems.

Finally, I indicated what was the likely problem affecting all countries involved in EHR projects: that the rigor, ethics and skepticism of medical science itself not applied in the domain of health IT.

I suggested a simple solution:  a paradigm shift in thinking about health IT as another medical device, that needed to be subject to the same methodologies and ethical considerations applicable for decades (or more) in the healthcare delivery sector such as medical devices, pharmaceuticals, and research (and other risk-prone industries e.g., aviation and automotive).

My goal was to provoke thinking about these issues, to circumvent blank, uncritical acceptance of industry and industry-supporter memes.

I believe I succeeded.  Feedback I received was that the audience, including government officials, found many new things to consider as they embark on their national health IT projects.

I also heard that some HIT seller representatives were squirming a bit.  That was not unexpected.  I was taking "control of their message" away from them.

Finally, I had a question from the audience, from fellow blogger Matthew Holt of the Health Care Blog.  (I've had some online debate with him before, such as in the comment thread at my April 2012 post here.)

Matthew asked me a somewhat hostile question (perhaps in retaliation for the thrashing he received at the end of my May 2009 post on the WaPo's HIT Lobby article here), that I was well prepared for, expecting a question along these lines from the seller community, actually.  The question was preceded by a bit of a soliloquy of the "You're trying to stop innovation through regulation" type, with a tad of Merck/VIOXX ad hominem thrown in (I ran Merck Research Labs' Biomedical libraries and IT group in 2000-2003).

His question was along the lines of - you were at Merck; VIOXX was bad; health IT allowed discovery of the VIOXX problem by Kaiser several years before anyone else; you're trying to halt IT innovation via demanding regulation of the technology thus harming such capabilities and other innovations.

The audience was visibly unsettled.  Someone even hollered out their disapproval of the question.

My response was along the lines that:


(I forgot to mention that I gave an invited presentation to Merck's Drug Surveillance department in 2006, PPT here, long after I was their employee, on the potential use of EHR data to detect drug adverse events sooner than traditional phase IV studies or ad-hoc reporting allowed.)

When I spoke of medical innovation requiring ethics, nearly the full audience at my keynote address - hundreds of people - broke out in applause.


•
I knew at that point that my talk was a success.

More photos of my trip are here.

Addendum:  Another added pleasure in my visit Down Under. As Australia and the U.S. respect each other's amateur radio licenses, I was able to operate my handheld radio as "KU3E portable Victor-Kilo." VK is the international radio prefix for Oz.  Contacting Australia from the U.S. is considered a "holy grail" of ham radio.  It was interesting to hear amateur radio "from the other end."

An excellent multimedia video of HIC 2012 produced as the conference proceeded has been posted on YouTube at http://www.youtube.com/watch?v=DZg_46wY0E0.  It was finished and shown immediately after the conference's conclusion.

Agree. HIT devices are unproven and experimental. Patients and doctors alike are guinea pigs for the HIT vendors, enriching them while suffering death and other adversity.

Here is an interesting post as a doctor watches his EHR system move from patient centered into a quest for more money through certification.