From my definition of bad health IT (BHIT) at this link:

Bad Health IT ("BHIT") is defined as IT that is ill-suited to purpose, hard to use, unreliable, loses data or provides incorrect data, causes cognitive overload, slows rather than facilitates users, lacks appropriate alerts, creates the need for hypervigilance (i.e., towards avoiding IT-related mishaps) that increases stress, is lacking in security, compromises patient privacy or otherwise demonstrates suboptimal design and/or implementation.


Considering the problem of lost data (lost x-rays) that affects not one, but two versions ("versions 3.x and 4.x and higher") of a common GE PACS (radiology image management) system, as in the attached memo to hospital radiology and IT executives, one might ask: 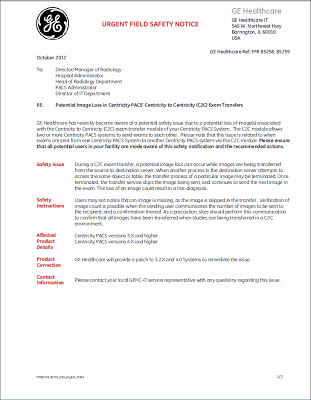 Beware disappearing x-rays.  Make sure every system user performs this workaround, too (click to enlarge).

It's not as if missing x-rays are a trivial matter.  One routine x-ray lost to followup resulted in the needless and rather horrible death of an infant, and a $1.5 million settlement, as at the June 2011 link "Babies' deaths spotlight safety risks linked to computerized systems" (case #2).

Patient safety is being compromised.

Lack of regulation of health IT, and lack of reporting and accountability, needless to say, are major contributors to the prevalence of BHIT.

I also note for several years running, including in the latest report of 2013, the ECRI Institute (an independent tester of healthcare technology) reports health IT-related problems as among the top ten technology problems in hospitals (link to report):

Three of the ten topics on the 2013 list are directly associated with the still-maturing [i.e., experimental - ed.] health IT field where the interplay between complexity and effectiveness and potential harm is most evident; several of the other topics are peripherally related to HIT issues.

“The inherent complexity of HIT-related medical technologies, their potential to introduce new failure modes, and the possibility that such failures will affect many patients before being noticed—combined with federal incentives to meet Meaningful Use requirements—leads us to encourage healthcare facilities to pay particular attention to health IT when prioritizing their safety initiatives for 2013,” says James P. Keller, Jr., vice president, health technology evaluation and safety, ECRI Institute.

The hazards included in the 2013 list, published in the November 2012 issue of ECRI Institute’s Health Devices journal, met one or all of the following criteria: it has resulted in injury or death; it has occurred frequently; it can affect a large number of individuals; it is difficult to recognize; it’s had high-profile, widespread news coverage.

Posted by InformaticsMD at 6:43 PM

Doctors remain shackled by the impediments of these devices. Interesting that there are too many alarms often, but no warnings when they are needed, DEAD silence.

These reports represent the tip of the iceberg of EMR defects and hazards. Most hospitals do not report and most nurses and doctors are afraid to report because they suffer retaliation in ways that are well disguised by the powers running the hospitals. The work environments at hospitals for the workers is not much different than working for Assad.

The myth that EMR’s will lower cost and allow medical records to be accessed by medical providers appears to be dispelled by this link:

I could not help but think of the people still suffering along the east cost while the politicians are congratulating themselves about how quickly the cleanup has occurred. They seem to repeat in chorus “Nothing to see here, move along.”