Why Are We Complicit? A Narrative for Our Era

Why are seemingly good people complicit with bad things?  In health care, we have seen seemingly good health care professionals and academics silent in the face of manipulation and suppression of clinical research; deception, attacks on free speech and the press, silencing of whistleblowers;  conflicts of interest; ill-informed, incompetent, self-interested leadership; and outright corruption and crime, including fraud, bribery, and extortion.

We have seen the anechoic effect, that cases of such behavior are not the subject of polite discussion.  When I saw a whistleblower being threatened (he ultimately lost his job), one colleague said I should ignore it, and keep my nose "to the grindstone."

Why?  One explanation is that ordinary people are afraid to challenge behaviors that help the rich and powerful, fear losing their jobs, fear angering others.  It seems hard to comprehend the mindset of those who are complict.

First they came for the socialists, and I did not speak out—because I was not a socialist. 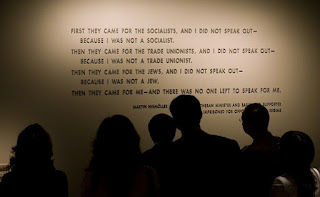 Then they came for me—and there was no one left to speak for me.


Today we have a new narrative about how people are sucked into complicity, in an op-ed in the New York Times by James Comey,

Amoral leaders have a way of revealing the character of those around them. Sometimes what they reveal is inspiring.

But more often, proximity to an amoral leader reveals something depressing. I think that’s at least part of what we’ve seen with Bill Barr and Rod Rosenstein. Accomplished people lacking inner strength can’t resist the compromises necessary to survive Mr. Trump and that adds up to something they will never recover from.

It starts with your sitting silent while he lies, both in public and private, making you complicit by your silence. In meetings with him, his assertions about what 'everyone thinks' and what is 'obviously true' wash over you, unchallenged, as they did at our private dinner on Jan. 27, 2017, because he’s the president and he rarely stops talking. As a result, Mr. Trump pulls all of those present into a silent circle of assent.

Speaking rapid-fire with no spot for others to jump into the conversation, Mr. Trump makes everyone a co-conspirator to his preferred set of facts, or delusions. I have felt it — this president building with his words a web of alternative reality and busily wrapping it around all of us in the room.

I must have agreed that he had the largest inauguration crowd in history because I didn’t challenge that. Everyone must agree that he has been treated very unfairly. The web building never stops.

From the private circle of assent, it moves to public displays of personal fealty at places like cabinet meetings. While the entire world is watching, you do what everyone else around the table does — you talk about how amazing the leader is and what an honor it is to be associated with him

Next comes Mr. Trump attacking institutions and values you hold dear — things you have always said must be protected and which you criticized past leaders for not supporting strongly enough. Yet you are silent. Because, after all, what are you supposed to say? He’s the president of the United States.

You feel this happening. It bothers you, at least to some extent. But his outrageous conduct convinces you that you simply must stay, to preserve and protect the people and institutions and values you hold dear. Along with Republican members of Congress, you tell yourself you are too important for this nation to lose, especially now.

You can’t say this out loud — maybe not even to your family — but in a time of emergency, with the nation led by a deeply unethical person, this will be your contribution, your personal sacrifice for America. You are smarter than Donald Trump, and you are playing a long game for your country, so you can pull it off where lesser leaders have failed and gotten fired by tweet.

Of course, to stay, you must be seen as on his team, so you make further compromises. You use his language, praise his leadership, tout his commitment to values.

And then you are lost. He has eaten your soul.


Preserve your souls before it is too late. 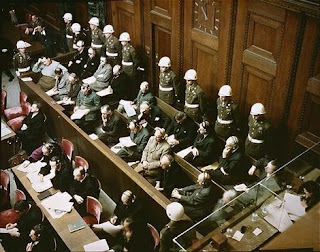