In  2020, cases of the revolving door accumulated quickly. 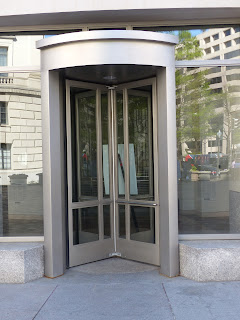 Let us begin with cases of the old fashioned outgoing revolving door, that is, of people leaving leadership positions in governmental bodies which regulate health care or make health care policy, then soon obtaining jobs in the health care industry, particularly organizations which they previously regulated or were affected by the policies they made.

Alphabet, the parent company of Google and Verily Life Sciences, continues to bolster its ranks of healthcare experts with the latest hiring of Vindell Washington, M.D.

Washington served as the national coordinator for health IT from August 2016 to January 2017.

As one of the highest health IT policy leaders, Washington brings to Verily a deep understanding of the industry. He is an emergency medicine physician by training.


So he moved from a position with significant influence over government health IT policy to a big IT company involved in health care.  Admittedly though, this moves comes three years after he left the ONC.

Humana Inc. has hired away a key regulatory insider from the federal government.

CMS is the agency that oversees both Medicare and Medicaid, the government-backed health plans. Goodrich was also director of the Center for Clinical Standards and Quality, the CMS website states.


Note that Humana's business is heavily influenced by the actions of CMS.

The Medicare Advantage segment brought in about $37.1 billion of revenue in the nine months ended Sept. 30, 2019.


Mary Sumpter Lapinski from Government Affairs at Bristol-Myers-Squibb to Counselor to the Secretary of the Department of Health and Human Services (DHHS) for Public Health and Science, then to Vice President of Global Governance Affairs for Greenwich Biosciences

Per a Buzzfeed News article, January 24, 2020 (which also discussed the larger revolving door problems involving the pharmaceutical industry and the Trump administration):


Again, most recently she moved from a senior position in DHHS affecting public health and science to a biotech company.

Roxana Weil, Lead Toxicologist from the Center for Tobacco Products at the Food and Drug Administration (FDA) and Gabriel Muniz who inspected tobacco manufacturers for the FDA to Juul Labs Inc

Juul Labs Inc. has hired former Food and Drug Administration employees and is recruiting more researchers as it prepares for a crucial regulatory hurdle that will determine the future of the top U.S. e-cigarette maker.

Roxana Weil, formerly a lead toxicologist at the agency’s Center for Tobacco Products, joined Juul as principal scientific adviser in September. Gabriel Muniz, who worked in an FDA division that inspects tobacco manufacturers, joined Juul last month as a director of regulatory compliance.

The company and its peers must submit applications to the FDA by May 12 in order to continue selling their products. The deadline is a defining moment for the e-cigarette industry, which has been under fire following a surge in teen vaping and a lung-injury outbreak that sickened thousands and was later tied to THC.

For Juul, securing a swift clearance is critical. The company has seen its once-rich valuation drop since the broader vaping backlash began. Failing to win the FDA’s blessing could shut it out of a market it has dominated.


So they moved from regulating tobacco to a company essentially involved in selling tobacco analogues.  Note that the tobacco company Altria made a major investment in Juul (look here.)

There are two recent examples

Brad Smith, Chief Operating Officer of Anthem's Diversified Business Group to be Director, Center for Medicare and Medicaid Innovation (CMMI) at the DHHS

The Trump administration has selected Brad Smith to serve as the director of the Center for Medicare and Medicaid Innovation (CMMI), where he will oversee the creation and stewardship of value-based payment models.

Smith most recently was the chief operating officer of Anthem’s Diversified Business Group, a division of the insurance giant that includes provider services. He was also the co-founder and CEO of palliative care services company Aspire Health.


Anthem is a health insurer which provides Medicare supplements and Medicare Advantage programs, so its business is greatly affected by any changes in how Medicare or Medicaid makes payments.

Amanda Adkins, Executive for Cerner Corp, Now Running for the House of Representatives as a Republican

This could be called a running start that will likely lead through the incoming revolving door.

Cerner executive Amanda Adkins has taken a leave of absence from the company to focus on her campaign to unseat Democratic Rep. Sharice Davids.

Adkins, a former Kansas Republican chair, launched her bid for Kansas’ 3rd congressional district in September, but initially planned to remain as Cerner’s vice president of strategic growth through the campaign.

But as of last week, according to a company spokeswoman, Adkins went on unpaid leave after from her role after 15 years with the health care IT giant.


Note that the Star article, unlike the others quoted above, provided at least a slightly detailed discussion of why this (potential) move poses a conflict of interest:

The Kansas City-based company is a major federal contractor with a $10 billion contract to design a new health care records system for the U.S. Department of Veterans Affairs. The new system is expected launch later this year.

But Holman said the fact that she can return from leave after the election still raises questions about a conflict of interest since she could end up on committees with oversight of the company’s contracts if elected to Congress.

'The conflict still persists,' Holman said in a phone call. 'The fact that she has not resigned and remains an employee of Cerner means that conflict of interest remains front and center.'

Sigh.  So while there is much discussion of corruption in high places, and its potential link to high crimes and misdemeanors, the revolving door quietly spins on well-oiled hinges, as it has for years, including many years before the current administration.


The ongoing parade of people transiting the revolving door once again suggests how the revolving door may enable certain of those with private vested interests to have disproportionate influence on how the government works.  The country is increasingly being run by a cozy group of insiders with ties to both government and industry. This has been termed crony capitalism. The latest cohort of revolving door transits suggests that regulatory capture is likely to become much worse in the near future.