Has Ghostwriting Infected The "Experts" With Tainted Knowledge, Creating Vectors for Further Spread and Mutation of the Scientific Knowledge Base?

I could have titled this piece "have the deceivers been themselves deceived?"

Recent revelations have shown that biomedical ghostwriting is a scourge that some physicians and scientists -- who are clearly lacking ethics, insight and perhaps an understanding of psychiatric defense mechanisms such as rationalization -- engage in all too often, as it taints the corpus of worldwide scientific literature.

(I covered the issues related to ethical and justified claims of provenance for scientific writing in my post "Wyeth: Ghostwritten Papers Fake, But Accurate" here along with a discussion of why lay leadership of biomedical R&D organizations was not a good idea. Such leaders cannot vouch for the scientific fairness and accuracy emanating from their own organizations.)

One should examine the evidence in a first-person manner. The New York Times has made available secret documents and emails secured by Senator Grassley on Wyeth's ghostwriting practices. These documents were unsealed by a judge in a personal injury lawsuit and chronicle Wyeth's use of a medical writing company to prepare articles for publication in medical journals.

Wyeth said all the articles are "scientifically accurate" and that "it is a common practice in the pharmaceutical industry to work with such firms" (and, by implication, to falsify claimed authorship). As justification for clearly unethical practices, this is a rather poor argument, being a classic logical fallacy known as the Appeal to Common Practice:

1. X is a common action.
2. Therefore X is correct/moral/justified/reasonable, etc.


That said, these documents raise an important question of a systemic nature:

Have the scientific ghostwriting deceivers themselves been deceived regarding biomedical reality by these practices?

To illustrate this point, in the New York Times online document pool, we discover that Dr. Gloria Bachmann, Associate Dean for Women's Health and Professor of OB/GYN and Medicine at UNDNJ-Robert Wood Johnson Medical School was presented with a tidy ghostwritten article entitled "The Importance of Treating Vasomotor Symptoms" (in peri- and post-menopausal women) by authors "TBD" (to be decided): 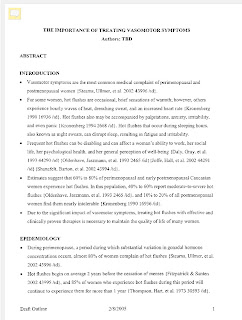 
about which Bachmann wrote the following in an email to the true authors' organization:

"Outline is excellent as written. I would like to try for publication as a review article in Obstetrics and Gynecology. We would have to change the title to "Vasomotor Symptoms: Evidence Based Treatment Options" or a title that emphasizes the data driven writing style."


Here is an image of the email: 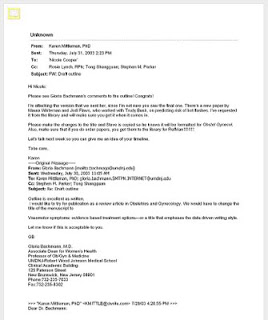 
She found the content OK and agreed to review it.

Apparently, only minor changes were made. (Bachmann should have received accreditation in the acknowledgments section for reviewing the article, and/or a position far down the authorship hierarchy if she actually added some material).

Instead, the reverse occured.

The published document appeared with Bachmann as first (and only) author after Bachmann submitted it to a medical journal under her name, itself unethical. See what "Authors TBD" morphed into in the image below: 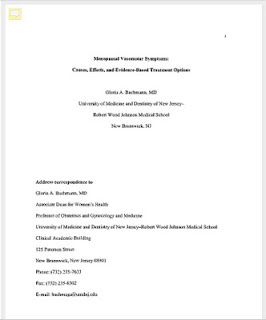 
Here is how the true authors, medical writers for DesignWrite, the medical writing and communications company retained by Wyeth to write the article, received credit: 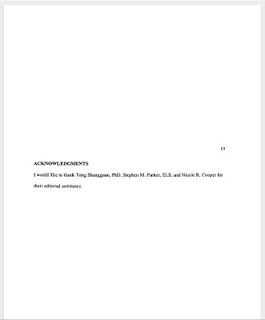 (How the "ghosts" received credit for writing the paper. Click to enlarge)

Bachmann has since stated that she believed she was adding to science by engaging in this deceit. From the New York Times:

The article, a nearly verbatim copy of the DesignWrite draft, appeared in 2005 in The Journal of Reproductive Medicine, with Dr. Bachmann listed as the primary author. It described hormone drugs as the “gold standard” for treating hot flashes and was less enthusiastic about other therapies.

The acknowledgments thanked several medical writers for their “editorial assistance,” not disclosing that those writers worked for DesignWrite, which charged Wyeth $25,000 to generate the article.

Dr. Bachmann, who has 30 years of research and clinical experience in menopause, said she played a major role in the publication by lending her expertise. Her e-mail messages do not reflect contributions she may have made during phone calls and in-person meetings, she said. ["May have made?" This gossamer excuse is embarrassing to me, as an academic myself - ed.]

“There was a need for a review article and I said ‘Yes, I will review the draft and make sure it is accurate,’ ” Dr. Bachmann said in an interview Tuesday. “This is my work, this is what I believe, this is reflective of my view.”…


She is quite off base regarding scientific authorship and "this being her work", but what also needs examination is her "lending her expertise" and her agreeing with the paper as "reflective of her view."

The paper itself lists many references, for example these: 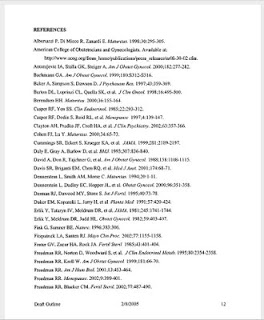 
Here is, then, the dilemma, another major problem posed by ghostwriting:

How many of the cited references, which contributed to Bachmann's beliefs regarding these drugs, were themselves ghostwritten and potentially biased, or otherwise influenced by drug companies?

For that matter, how many studies with different ("negative") conclusions on these subjects were suppressed from publication by industry pressure?

Bachmann's own "expert opinions" about these matters may be based upon false or misleading information she's read in other journals, the percentage of which are genuine vs. ghostwritten or industry-influenced being an unknown at this point in time.

While I believe Bachmann is most likely rationalizing away the unethical nature of attribution without fair and justifying contribution, perhaps fueled by additional motives of academic portfolio building and perhaps present and future potential pecuniary gain, it is possible she is being genuine about agreeing with the "science" in the paper.

However, her agreement may be predicated upon her own tainted expertise -- tainted by reading ghostwritten or industry-influenced articles in her area of specialty.

Will we ever be able to peel back all the layers of the ghostwriting onion to get to the core of impartial and objective scientific articles related to drugs and medical devices? Perhaps not, but the practice must stop going forward.

Tainted literature creates tainted scientific knowledge, the carriers of which may then further taint the knowledge base (with the best of intentions and with firm belief in the fairness and accuracy of their activities, of course).

Practitioners of evidence-based medicine may be unwittingly practicing "evidence-tainted medicine", or "pseudo-evidence based medicine" as described by others on this blog.

Such are the systemic risks of the scourge of ghostwriting.

I was made aware of the following 2011 paper thanks to a post by Dr Howard Brody on the Hooked: Ethics, Medicine and Pharma blog:  "Why Does Academic Medicine Allow Ghostwriting?  A Prescription for Reform" by Jonathan Leo, Jeffrey R. Lacasse, and Andrea N. Cimino

Due to its secretive nature, it is difficult to quantify how many invisible corporate authors haunt the medical literature.


The paper is worth reading in its entirety and as of this writing is available free at the link above.

You can't succeed when you turn commercial Health Insurance products into social tools. It just gridlocks trading of certain goods and services and ruins that economic sector which then trickles to the rest of the economy.

If Obama wants to insure more people then put them on some kind of medicaid paid by other cuts or at worst case by increasing taxes. But forcing Insurance companies to accept preexisting conditions is nuts. It's like forcing GM to give away every 10th car for free to someone who can't afford it. Accepting preexisting conditions is not "Insurance". Insurance is supposed to spread risk where many people pay for the few who happen to "get" sick. Forcing a healthy person to pay a sick persons health bills by forcing Ins. companies to accept them which in turn forces the Ins. company to raise premiums is sick economics.

And by Obama trying to sell it as a health care overhaul is a lie. By Obama saying it will help the economy is a damn lie. By "showing" statistics are on his side that's a scam.

In the short term some people will be getting something for nothing and be happy. In the long term these same people will be losing the most. The same way the Soviet Union helped their needy. It was all about self serving lies.

As I have written before, the "healthcare reform" package is simply an attempt at social re-engineering.

Done with haste, attempts at social re-engineering can lead to disaster.