A Bridge in Brooklyn and an Electronic Medical Records Bargain: Only One Hundred Nineteen Million Dollars Per User - Tolls Included

One of the favorite debates people involved in IT seem to like to have is over the meaning of "failure" of IT projects.

1 a : omission of occurrence or performance; specifically : a failing to perform a duty or expected action b (1) : a state of inability to perform a normal function <kidney > — compare heart failure (2) : an abrupt cessation of normal functioning c : a fracturing or giving way under stress
2 a : lack of success b : a failing in business : bankruptcy
3 a : a falling short : deficiency b : deterioration, decay
4 : one that has failed

The UK House of Commons Public Accounts Committee report on disastrous problems in their £12.7 billion national EMR program is here.

Only the most stubborn would argue that this case and the latest data is not representative of a "failure" in the truest sense of that word:

There are only 174 clinicians using Lorenzo patient software across the five early adopter trusts, according to Mike O'Brien, minister for the National Programme for IT (NPfIT).

Lorenzo is one of two software packages being used to set up centralised electronic health records as part of the £12.7bn National Programme for IT. This part of the programme is already running four years late.

The other patient software package is Cerner Millennium, being supplied by BT in London and a handful of trusts in the south.

By my calculations, that works out to:

While a somewhat satirical and sardonic calculation, that's about 73 million pounds or 119 million dollars per user, after almost a decade of work.

What more can be said than "stunning?"

The information came from a parliamentary question tabled by Richard Bacon MP.

Last week in the Commons he said:

"I tabled a question yesterday about the number of hospital trusts where Lorenzo has been partially deployed, asking how many users — how many concurrent users — of Lorenzo there are.

"It is literally just a handful, which means that the cost per user is not what one would expect… the cost is going to be many hundreds of thousands — possibly even more than a million — pounds per user per year."

Bacon said there has not been a single deployment of Lorenzo in 2009 because these early adopter trusts were having such problems.

"The reason is that the handful of deployments attempted have been an absolute mess, causing chaos in the hospitals where they were tried," he said.

Operations of entire hospitals were disrupted by software. This represents unconsented IT experiments on human subjects gone massively awry. Whether the "chaos" caused anyone harm seems never to be stated.

Deployments of Cerner Millennium have also caused problems, with St Barts in London now facing fines of £400,000 a month for missing patient care targets as a result of problems with the system.

Bacon also points out that the recently signed contracts with BT to deploy Cerner Millennium at hospitals in the south require BT to be paid even if the hospitals refuse the systems – a possibility if they think they will not work.

I would suggest someone in the UK provide screen shots and/or a YouTube video of these systems in operation so others can understand how such results can occur. (Oh, wait: the vendor contracts probably prohibit that, the hospital executives having signed such contracts also having signed away their fiduciary responsibilities to patients and clinicians.)

She said: "We all acknowledge that the NHS IT project is hugely ambitious [profoundly overambitious would perhaps be more accurate - ed.] and that it is essential that we get it right. [The Minister appears to be a master of the obvious - ed.] It is obvious to everybody that many challenges remain.

"We still believe that Cerner Millennium and Lorenzo will be able to support the NHS in the long term."

I have a bridge in Brooklyn, NY for sale. Perhaps the UK teams responsible for this debacle would be interested. After all, the cost per user of the bridge would be remarkably low, far less than USD $118 million - and the users could even be made to pay a toll for each use: 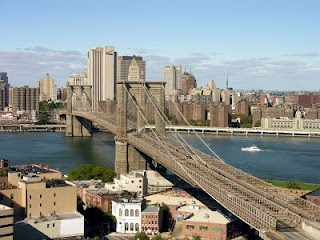 For sale: a bridge in Brooklyn.

After all, those Medical Informatics specialists act like know-it-alls about healthcare IT, and since domain-specific education and expertise are irrelevant in healthcare management, why should anyone listen to them?

I cannot believe that figure!