How Academic and Government "Anecdotes Are Not Data" Ideologues Kill People

... not really valid because they're not peer reviewed; they're just anecdotal.

Only an egghead could pen such words. 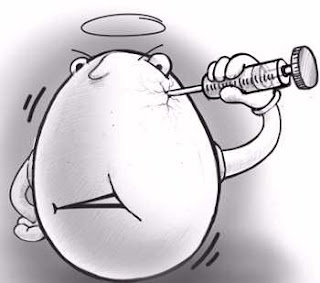 I always get hives immediately after eating strawberries. But without a scientifically controlled experiment with all the right peer review, it's not reliable data. So I continue to eat strawberries every day, since I can't tell if they cause hives.

I'd already written about anecdotalist refrains at my Mar. 7, 2011 post "Australian ED EHR Study: Putting the Lie to the Line "Your Evidence Is Anecdotal, Thus Worthless" Used by Eggheads, Fools and Gonifs." In that essay I cite Dr. Patrick himself on "anecdotal evidence", regarding which he hit the ball out of the Southern Hemisphere in an editorial in "Applied Clinical Informatics" entitled "The Validity of Personal Experiences in Evaluating HIT."

Aside from the fact that eggheads also don't seem to care about the issues of faulty peer review, especially in profitable biomedical sectors, such as at "The Lancet Emphasizes the Threats to the Academic Medical Mission" with its embedded links, and "Has Ghostwriting Infected The Experts With Tainted Knowledge, Creating Vectors for Further Spread and Mutation of the Scientific Knowledge Base?", there's this simple fact:

Yes, there were those pesky, off-narrative journalistic reports that the Japanese nuclear reactors were not entirely safe, that Bernie Madoff was a fraud, that mortgages for everyone was not a good idea, that the O-rings couldn't stand sub-freezing temperatures, that the the foam that broke off the Columbia launch tank caused a danger, and that the Titanic didn't have enough lifeboats, but they weren't peer reviewed...so we ignored them. Saved us a lot of money, too.

If the purpose of Medical Informatics is the improvement of healthcare (as opposed to career advancement of a small number of academics through publishing obscure articles about HIT benefits while ignoring downsides in rarified, echo-chamber peer reviewed journals), then:


... researchers like Jon Patrick who address real-world issues of great import to patients on HIT risks, and further go public on the web with their work without the full blessings of some dusty journal (and those like Ross Koppel who also directly address the downsides, and others who make available to the public material such as on blogs like this and this, papers like this and sites like this) are the former.

Those who deem only "peer reviewed" articles worthy of daylight, and everything else - especially and particularly reports of downsides - "anecdotal" (the anecdotalists) are the latter.

I stand by this assertion.

Finally, I ask: at what point does ignoring work such as Prof. Patrick's, if patient harm is caused by the system he reviewed, constitute reckless endangerment and perhaps criminal negligence by hospital and government officials?

As if on cue, this story appeared in the WSJ:

TOKYO—Japanese regulators discussed in recent months the use of new cooling technologies at nuclear plants that could have lessened or prevented the disaster that struck this month when a tsunami wiped out the electricity at the stricken Fukushima Daiichi power facility.

However, they chose to ignore the vulnerability at existing reactors and instead focused on fixing the issue in future ones, government and corporate documents show. There was no serious discussion of retrofitting older plants with the alternative technology

I guess the "vulnerability reports" just weren't peer reviewed, therefore meaningless - or not reviewed by the "right" peers.

This sounds like our own FDA, ONC office and Institute of Medicine (via the Committee on Patient Safety and Health Information Technology), "choosing to ignore" health IT "vulnerabilities" (such as the aforementioned) and focusing on future issues such as comparative effectiveness research, "the common good", etc. instead.

The truth lurks behind the walls of convenience constructed of peer review and anecdotes.

It is of more than passing interest that Blumenthal is oft quoted providing the most pedantic of pedantic anecdotes to support HIT, yet he depreciates tbe reports of death from HIT as anecdotes. Hello?

Yhose that failed to heed the warning should be prosecuted for murder if someone dies, and other criminal charges for the current state of affairs.

"Fund and administer demonstration communities to show how the advanced use of health IT can achieve measurable improvements in care, efficiency, and population health."

Seems to me these will have to address any patient care deficits created by Health IT.

In the overview of the Five Year Plan, am I missing something, or is 'healthcare IT safety' a missing line item?

By the way, 'Five year plans' were a feature of communist countries, were they not?