Are Those Sockpuppers From Down Under?

We at Healthcare Renewal have had experience with the healthcare sock puppets. They are shills, a person or group working on behalf of a company or other special interest. They attempt to use distraction, ad hominem, misdirection and other psyops tactics to attack points of view they don't like. They also plant memes they or their sponsor deem desirable.

They are universally anonymous in their postings.

One got careless and got nailed via IP forensics, as at my Jan. 2010 post "More on Perversity in the Healthcare IT World: Is Meditech Employing Sockpuppets?" and my semi-satirical followup post a few days later, "Socky the Meditech Sockpuppet on Vacation?" after he/she disappeared after exposure.

A Healthcare Renewal reader with an MBA at that time non-anonymously related the following (emphases mine):

In reading this thread of comments I have to believe IT Guy [the Sock puppet - ed.] is a salesperson. My only question is: Were you assigned this blog or did you choose it? We had this problem a number of years ago where a salesperson was assigned a number of blogs with the intent of using up valuable time in trying to discredit the postings.

In my very first sales class we learned to focus on irrelevant points, constantly shift the discussion, and generally try to distract criticism. I would say that HCR is creating heat for IT Guy’s employer and the industry in general.

I find it sad that a company would allow an employee to attack anyone in an open forum. IT Guy needs to check with his superiors to find out if they approve of this use of his time, and I hope he is not using a company computer, unless once again this attack is company sanctioned.

It seems this foul type of creature is starting to crawl out of the woodwork regarding Prof. Jon Patricks' analysis of an ED EHR system mandated by the state's government of NSW for public hospitals, as I wrote about in my posts such as on Mar. 5, 2011 at "On an EMR Forensic Evaluation by Professor Jon Patrick from Down Under: More Thoughts.".

They may be corporate, they may be government. They likely have a financial stake in the ED EHR project as well.

For instance, the sockpuppet/shill comments are starting to appear at the Australian Health Information Technology blog of Dr David More MB, PhD, FACHI at http://aushealthit.blogspot.com:

This blog has only three major objectives.

The first is to inform readers of news and happenings in the e-Health domain, both here in Australia and world-wide.

The second is to provide commentary on what seems to have become the lamentable state of e-Health in Australia and to foster improvement.

The third, sadly, is now to try and force accountability for the actions of, and the funds spent, by NEHTA. [National E-Health Transition Authority as at this link - ed.]

(Sounds like a kindred mission relative to HC Renewal.)

For instance at Dr. More's post "Prof Patrick Has Really Hit the Bullseye It Would Seem. Lots of Supportive Comments From All Over!" we see the following sock puppet-like comments rearing their holey (not holy) woven head:

... It seems that the heuristic axiom of Ockham’s Razor (as presented by Jon) is the design criteria by which Jon thinks NSW Health should have selected their CIS ... unbelievable!

Unfortunately Jon has not proposed any practical alternatives in his papers. His papers are full of opinions, unfounded claims and incorrect facts (not to mention the countless flaws in his research methodologies).

Dr Patrick - you are so misinformed. There are so many untruths in what you report. Why is this? Because you interviewed 7 people. Being Directors, what is the likelihood they are hands on with the system? Minimal I would say from experience in the EDs. Call yourself a researcher - huh! It is a totally biased report which reflects the opinions of those with an axe to grind. Why don't you talk to some nurses,clerical staff and junior doctors? There are hundreds of them working in EDs across the state. Their opinion should matter as they are the ones caring for our patients. You should be ashamed of yourself! I certainly would not hire you to do a research project if this is the biased and blatantly incorrect rubbish that you come up with. Shame on you!!

and the ever-so-common refrain of:

Has Dr Patrick ever completed (or even been involved in) an implementation of an EMR (at all or of any scale)? Can someone tell us what makes him an authority the subject? [I, OTOH, have done so, authoring, implementing, managing for hospitals and major pharma - ed.]

... His view is unbalanced and his paper is clearly bias. How Sydney University tolerates papers of such poor quality and biasness (being published by their professors) is beyond me. [Paper is 'clearly bias'? Biasness? This person needs a grammar lesson - ed.]

Ink is never put to specifics of the supposed transgressions in these largely ad hominem, anonymous attacks.

If those who wrote them had the fortitude to identify themselves, perhaps they might be somewhat credible. However that rarely if ever is the case.

In my humble opinion, such comments are risible, not even worth the electrons they're written with. 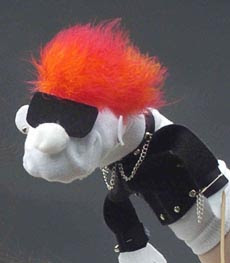 Socky the Health IT Sockpuppet. Click to enlarge.
p.s. an ED EHR-injured relative of mine has a message to the sockpuppets of the world. It's not fit for a public site, but it has to do with travel to a very hot, deep, sulfurous place in the earth.

Internet sock puppets have cause a lot of havoc. The Washington Post and the New York Times had pices on it.

and here is the origin

Thanks for bringing the issue.

Is there ever a safe place anymore.

Thanks for those links. In my original Sockpuppet post I'd linked to a NY Times article as well:

Sock puppeting: "the act of creating a fake online identity to praise, defend or create the illusion of support for one’s self, allies or company." (NY Times).