Experiments on Top of Experiments: Threats to Patients Safety of Mobile e-Health Devices - No Surprise to Me

As noted by columnist Neil Versel at MobiHealthNews.com in a Mar. 14, 2012 post "Beware virtual keyboards in mobile clinical apps":

... Remember the problems Seattle Children’s Hospital had with trying to run its Cerner EMR, built for full-size PC monitors, on iPads? The hospital tried to use the iPad as a Citrix terminal emulator, so the handful of physicians and nurses involved in the small trial had to do far too much scrolling to make the tablet practical for regular use in this manner.

[From that post: As CIO magazine reported last week, iPads failed miserably in a test at Seattle Children’s Hospital. “Every one of the clinicians returned the iPad, saying that it wasn’t going to work for day-to-day clinical work,” CTO Wes Wright was quoted as saying. “The EMR apps are unwieldy on the iPad.” - ed.]

Thank heaven it was a small trial, instead of a typical forced rollout to an entire clinical community. Someone seems to have grasped the experimental nature of the effort.

Well, there may be a greater risk than just inconvenience when tablets and smartphones stand in for desktop computers. According to a report from the Advisory Board Co., “[A] significant threat to patient safety is introduced when desktop virtualization is implemented to support interaction with an EMR using a device with materially less display space and significantly different support for user input than the EMR’s user interface was designed to accommodate.”

The report actually is a couple months old, but it hasn’t gotten the publicity it probably deserves. We are talking about more than user inconvenience here. There are serious ramifications for patient safety, and that should command people’s attention.

Unfortunately, far too little about health IT safety commands people's attention. It's merely assumed that either 1) health IT is inherently beneficent, or 2) the risks are deliberately ignored for - I'm sorry to note - profit and career advancement.

How many CIOs or even end users have considered another one of the unintended consequences of running non-native software on a touch-screen device, that the virtual, on-screen keyboard can easily take up half the display? “Pop-up virtual keyboards obscure a large portion of the device’s display, blocking information the application’s designer intended to be visible during data entry,” wrote author Jim Klein, a senior research director at the Washington-based research and consulting firm.

How many CIO's have considered unintended consequences of such experiments-on-top-of-experiments (i.e., handheld or other lilliputian computing devices on top of the HIT experiment itself)? Probably few to none.

The typical hospital CIO, usually of an MIS background and generally lacking meaningful backgrounds in research, computer science, medicine, medical informatics, social informatics, human-computer interaction, and other research domains, are usually "turnkey-shrinkwrapped software implementers." In fact, most have backgrounds woefully inadequate for any type of clinical device leadership role. They may even lack a degree of any kind, as major HIT recruiters over the past decade expressed the following philosophy ca. 2000:

I don't think a degree gets you anything," says healthcare recruiter Lion Goodman, president of the Goodman Group in San Rafael, California about CIO's and other healthcare MIS staffers. Healthcare MIS recruiter Betsy Hersher of Hersher Associates, Northbrook, Illinois, agreed, stating "There's nothing like the school of hard knocks." In seeking out CIO talent, recruiter Lion Goodman "doesn't think clinical experience yields [hospital] IT people who have broad enough perspective. Physicians in particular make poor choices for CIOs. They don't think of the business issues at hand because they're consumed with patient care issues," according to Goodman. (Healthcare Informatics, "Who's Growing CIO's".)

I wonder just how many CIO's "from the school of hard knocks" were put into action by those groups.

Back to the MobiHealthNews.com article:

... Klein said that users have two choices to deal with a display that’s much smaller than the software was designed for. The first is to zoom out to view the whole window or desktop at once, but then, obviously, users have to squint to see everything, and it becomes easy to make the wrong selection from drop-down menus and radio buttons.

Or, users can zoom in on a small part of the screen. “This option largely, if not completely, eliminates the context of interaction from the user’s view, including possible computer decision-support guidance and warnings, a dangerous trade-off to be sure,” Klein wrote.

In either case, the virtual keyboard makes it even more difficult to read important data that clinicians need to make informed decisions about people’s health and to execute EMR functions as designed.

1. As far back as the mid 1990's in my teaching of postdoctoral fellows in my role as Yale faculty in Medical Informatics, due to the limited screen real estate I uniformly presented the following 'diagram' regarding my beliefs about handheld devices (then commonly known as PDA's) as tools for significant EHR interaction: 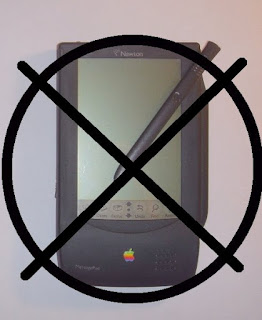 This was before today's hi-res screens on small devices, but the limited real estate and its ramifications were obvious to critical thinkers who knew both medicine and medical informatics, even in the mid 1990's.

Similarly, experiments with HP95 handheld PC's running DOS failed miserably in a similar time frame at the hospital where I later became CMIO. (One benefit: I did get to salvage two of the devices from the trash bin for my obsolete computer collection!): 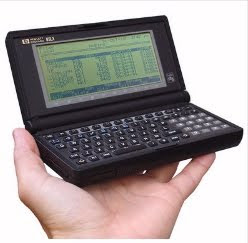 HP95LX - full DOS computer equivalent to an IBM PC (except, of course, for screen size).

Therefore, IMO the Advisory Report findings of 2012 merely verify what was obvious almost two decades ago.

Small devices are adjuncts only, suitable for limited uses (and only after extensive RCT's with informed consent even then, in my view).

2. Another issue that arises is more fundamental. The article notes:

“It seems clear that running even a well-designed user interface on a device significantly different than the class of devices it was intended to be run on will lead to additional medical errors,” Advisory’s Klein commented.

The critical thinking person's question is: who knows if the "class of device" the app was "intended to run on" is itself appropriate or optimal?

Commercial clinical IT (with the exception of devices that require special resolutions, pixel densities, contrast ratios etc., such as PACS imaging systems) is usually designed for commercially available hardware.

That means the same size/type of computer monitor you obtain at Best Buy or Wal Mart.

Is that sufficient? Is that optimal?

As in my Feb. 2012 post "EHR Workstation Designed by Amateurs", who really knows? 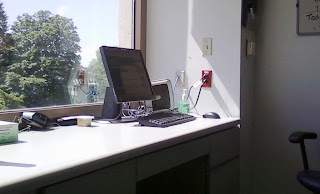 Click to enlarge. A workstation in an actual tertiary-care hospital ICU, 2011. How many things are wrong here besides the limited display size? See aforementioned post "EHR Workstation Designed by Amateurs".

These systems are not robustly cross-tested in multiple configurations, such as multiple-large screen environments vs. single screen, for example.

In summary, performing an experiment with small devices on top of another experiment - the use of cybernetic intermediaries (HIT) in healthcare that is already known to pose patient risk - is exceptionally unwise.

It would be best to decide what the optimal workstation configuration is, as applicable to different clinical environments, in limited RCT's with experts in HCI strongly involved, before putting patients at additional risk with lilliputian information devices that only a health IT Ddulite could love.

Ddulites: Hyper-enthusiastic technophiles who either deliberately ignore or are blinded to technology's downsides, ethical issues, and repeated local and mass failures.

The love of all things Apple has become a mania. My handicapped wife went to get a new cell phone and was shown an iPhone. Only after showing the salesman that she can only use a phone with one hand and a fixed keyboard did he understand she wanted a Blackberry, just like the one she owns.

On top of this they had to order the phone since they only have virtual keyboards or sliders. Heaven forbid we give the customer what they want, and what they want is not made by Apple.

It behooves the Advisor Board to learn that not only virtual keyboards, but EHR, CPOE and associated CDS devices represent clear and present dangers to patients.

By not, it is tacitly supporting the most abusive experiment in American history, the taking of advantage of the defenseless patients by profit hungry HIT vendors.

The Advisory Board only learned of the existence of Medical Informatics through me in an op-ed in 1997, although my efforts to educate them were stymied by some apparently disturbed hospital executives.