New HHS Secretary, rather than singing unabashed praise for EMRs like his predecessors, states the obvious. However, the "solutions" are the usual boilerplate.

In the past, politicians on both sides of the aisle have generally sung unfettered and uncritical praise for electronic medical records and other health IT systems.

In any case, this recent article caught me by surprise:

"We simply have to do a better job of reducing the burden of health IT on physicians and all health care providers,” Dr. Price said April 27 at Health Datapalooza, an annual conference on health data transparency. “The promise of big data and health information technology is so great and absolutely remarkable but we must not, we cannot continue to get this wrong.”


The burdens have become so onerous that the new HHS secretary made these statements:


EHR requirements are causing some physicians to retire too early, Dr. Tom Price said at Health Datapolooza.
Dr. Price said that the burden being placed on physicians is causing many to leave practice way too early. He noted that his grandfather retired from practice at age 94 and his father retired in his early 80s.

“Now we are seeing physicians leaving the practice of medicine when they are 60 or 55,” he said. “Many of my colleagues, my personal friends who have been practicing, right now they are looking for the exit doors. They are trying to figure out how to get out of practicing medicine and I think it is incredibly important for us as a society to step back and ask, why?”

A significant factor is the shift to electronic health records, which has caused doctors to spend much more time looking at screens and feeling more like data entry clerks than health care providers, he said.


First, an aside on the term "Datapalooza."   Such an injudicious, "let's party" term as "datapalooza" reflects in my opinion the irrational exuberance that has characterized health IT for decades and led to the dilemma faced by physicians in 2017.  I've mentioned this before.  At my May 10, 2012 post "ONC's 'Health Data Palooza' - A Title of Exceptionally Bad Taste" at https://hcrenewal.blogspot.com/2012/05/oncs-health-data-palooza-title-of.html, I observed:

... This title for a government-sponsored meeting is bizarre and tasteless in my opinion.  What is deemed by ONC to be the major source of this data?  Health IT.


Also, the Secretary reiterates the other hyper-enthusiast-promoted line:

... The promise of big data and health information technology is so great and absolutely remarkable


This is the decidedly un-sober "revolutionizing medicine" claim I've been hearing about health IT for the past several decades.  As I observed at my August 2016 post at http://hcrenewal.blogspot.com/2016/08/ioannidis-what-happens-when.html, Ioannidis et al. wrote about this phenomenon more eloquently than I could regarding Big Data and biomedicine:

For several decades now the biomedical research community has pursued a narrative positing that a combination of ever-deeper knowledge of subcellular biology, especially genetics, coupled with information technology will lead to transformative improvements in health care and human health. In this Viewpoint, we provide evidence for the extraordinary dominance of this narrative in biomedical funding and journal publications; discuss several prominent themes embedded in the narrative to show that this approach has largely failed; and propose a wholesale reevaluation of the way forward in biomedical research

... The financial and clinical benefits predicted from shifting to EHRs have also largely failed to materialize because of difficulties in interoperability, poor quality, and accuracy of the collected information; cost overruns associated with installation and operation of EHRs at many institutions; and ongoing privacy and security concerns that further increase operational costs.

Regarding Dr. Price's statement that "We simply have to do a better job of reducing the burden of health IT on physicians and all health care providers", I find the statement remarkable coming from the top echelon of government.

It's about time, I opine.

Still more time is needed, however, before the government and organized medicine truly understand health IT enthusiast culture.  One might wonder if Dr. Price read my Aug. 9, 2016 post "More on uncoupling clinicians from EHR clerical oppression" at http://hcrenewal.blogspot.com/2016/08/more-on-uncoupling-clinicians-from-ehr_91.html - that is, until one reads his proposed solutions:

... He challenged the health IT professionals at the meeting to make their products more user friendly.

“We will work on reducing the burdens at the federal level, but we also need clinicians and IT folks on the ground to help make certain that technology implementation is done in a way that it enhances usability and increases efficiency,” Dr. Price said.


This assumes that complex major information systems such as EHR's can be made significantly more "usable", considering the constraints of time and the cognitive burdens such systems place on already-taxed clinicians.

As I have pointed out, these "EHRs" are really complex command-and-control systems with dozens of component systems: 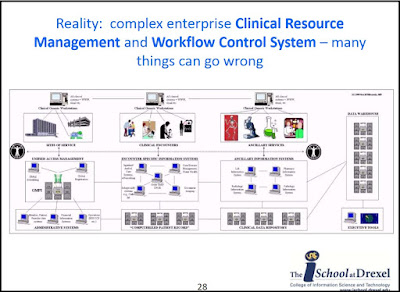 The term "EHR"/"EMR" is a misleading anachronism, no longer reflecting a medical file cabinet replacement but a far larger, complex amalgam of information systems.


I do not believe these systems really can be made less burdensome to clinicians to a major degree, no matter how clever the user interaction design.  The user manuals to the best of these systems are hundreds of pages long, and many clinicians user more than one system.  Further, paper will always be far simpler to use than computers, and no information system in a complex field like medicine will ever duplicate that ease-of-use.

The real-world solution to decrease clerical burden on busy and overtaxed clinicians is either to significantly decrease their patient load (unlikely to occur), or to decrease the amount of time they have to spend at computers and the amount of data they are called upon to enter per capita.  That solution cannot be accomplished without help from a significant number of - no surprise here - clerical personnel, for data entry, data abstraction and related mundane tasks.

... [Dr. Price] also called for true interoperability, a common goal that has persisted since electronic health records were mandated under the HITECH Act but remains an elusive target.

“This has always been the goal and it just seems so simple,” he said. “Somehow something has happened between the idea of interoperability and now that has made it so much more challenging.”


Achieving interoperability among many complex information systems that contain the massively complex datasets of biomedicine, a terminology set containing a massive number of unique concepts and terms, with millions of synonyms and subtleties (cf.:  Unified Medical Language System, https://www.nlm.nih.gov/research/umls/) is NOT so simple:

ANYTHING YOU DON’T UNDERSTAND IS EASY TO DO
ExampIe: If you have the right tools, how hard could it be to generate nuclear fission at home?


Further, and even worse:

It is my great concern that, should significant inter-EHR system interoperability be achieved, wholesale import of patient data from one system to the next could (and likely would) encourage 'laziness', e.g., uncritical acceptance of the incoming data as correct.   The propagation of inaccuracies and errors (already a significant issue with intra-system "cut and paste" as one example), would more readily propagate from one clinician and/or facility to another.

The repeat history-taking and fresh rewriting of a new chart regarding new encounters serves a corrective function that could be bypassed through seamless health IT "interoperability."

As I've written at this blog numerous times, the issue of basic operability is more important towards practical use of EHRs in the real-world care of individual patients (which I consider the heart and soul of medicine) than interoperability.

... He placed that fault on current federal regulation around interoperability and pledged to create an environment that reduces regulatory roadblocks and allows the technology sector to innovate and foster the free flow of data.


This idea is dead in the water if history is any lesson.  The lack of any meaningful regulation of the health IT industry over the past several decades, that is, the unprecedented regulatory accommodation afforded the health IT sector, certainly did not promote meaningful innovation in the technology or in interoperability.   The primary driver and business equation is "proprietary" == locked-in customers.

“From my perspective it seems that what we ought to be doing is deciding the rules of the road,” Dr. Price said. “We are going to drive on the right side. We are going to stop at the red light. This is the language we are going to do. This is what a triangular sign looks like, as opposed to stipulating every single dot... all the way down the line.”


Dr. Price has taken the first (remarkable) step in calling out the severe impact of the burdens placed on clinicians by current health IT systems and practices.

What he and his advisors have not yet done is truly think through the solutions critically.

That needs to occur, for the proposed solutions are no "solution" at all.  They are merely more of the same muddled thinking and hyper-enthusiastic boilerplate that got clinicians into the cybernetic mess they are in to begin with.

Posted by InformaticsMD at 12:06 PM