While we were distracted by the daily onslaught of news, it appears that the revolving door continues to spin. 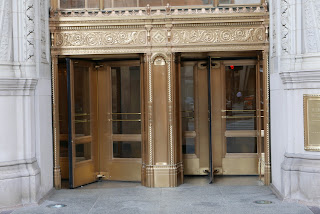 This month there has been a flurry of transitions from big health care and health care related corporations to the federal government.  So it appeared to be time for another revolving door update.


We start with a transition from a few months ago that we had not previously discussed, and then list in chronologic order those occurring this month.

This was noted in Stat News Plus, behind a pay wall, and in an official announcement from NIDA on April 30, 2018,

The National Institute on Drug Abuse (NIDA), a component of the National Institutes of Health, welcomed Dr. Kurt Rasmussen today as the Director of the Division of Therapeutics and Medical Consequences (DTMC). Dr. Rasmussen’s career spans more than 30 years of research and leadership experiences in pharmacology and neuroscience therapeutics.


At least he is an actual biomedical researcher.

I could not find any information on whether he has ongoing financial ties to Eli Lilly, e.g., stock holdings.

The Department of Veterans Affairs will replace the acting head of its health care system with a temporary appointee on Wednesday, the VA’s acting secretary said Tuesday, though the department still hasn’t settled on a permanent replacement to lead the sprawling division.

Dr. Richard Stone will take over the Veterans Health Administration, the VA’s acting secretary, Peter O’Rourke, told reporters. The health administration is one of the three main branches of the VA and comprises more than 1,500 health-care facilities, thousands of physicians and nurses and a budget of about $70 billion to treat some nine million veterans.

Dr. Stone, a retired Army doctor, previously served at the VA as deputy undersecretary for health before becoming a vice president at Booz Allen Hamilton focused on military health.

General Stone will serve as medical advisor for Booz Allen’s healthcare clients who are transforming healthcare delivery in the defense, civil, and commercial markets. He will assume a leadership role in the firm’s work for the Military Health System (MHS) across the Services and ultimately across the new Defense Health Agency (DHA) and Enhanced Multi-Service Markets (eMSMs).


Booz Allen Hamilton apparently does not widely advertise the identities of its clients, but on the Markets section of its website, claims

We serve commercial clients across all industries, including some of the largest organizations in critical infrastructure sectors like financial services, energy, healthcare, and manufacturing, and we have a thriving cadre of international clients in the Middle East and Southeast Asia.


So presumably Dr Stone had responsibilities helping big commercial health care firms improve their bottom lines. In his new position, Dr Stone may be in a position to influence how some such big firms interact with the VA in an administration that is increasingly advocating privatization of many VA functions.

Paul Mango, a former health-care consultant who lost a bid this year to be the Republican nominee for governor of Pennsylvania, is joining the Trump administration.

The Center for Medicare and Medicaid Services, which is housed in the Department of Health and Human Services, on Tuesday named Mango chief of staff and chief principal deputy administrator.
In addition,

Mango, who lives outside Pittsburgh, was a longtime executive at the consulting firm McKinsey & Co.


It appeared he needed something new to do.  He had left his very long-term position with McKinsey & Company to run for Governor of Pennsylvania in 2017, per Politics PA,

PoliticsPA has learned that Gubernatorial Candidate Paul Mango of Allegheny County is no longer with McKinsey & Company. This move could signal he is closer to an official announcement of a run for Governor.

Mango left the firm earlier this year. He joined McKinsey in 1988,


But then, per the Inquirer,

He finished second in a three-candidate primary in May for the GOP gubernatorial nomination, losing to former State Sen. Scott Wagner.

leaving Mr Mango temporarily unemployed.  His new employment apparently was not due to any actual background or expertise in medicine, health care, or public health,


The Inquirer article suggests Mr Tango was attractive to the Trump regime more for his political views than any expertise or lack thereof in health care,

Mango ran as a social conservative who attacked Wagner for supporting anti-discrimination legislation that would protect LGBT individuals. He said during the campaign that he supported work requirements for able-bodied adults on Medicaid. The Trump administration has adopted that approach.


Mr Mango does claim expertise as a business manager in the health care sphere.  He has an affiliation with the University of Pennsylvania's  Center for Health Incentives and Behavioral Economics in the Leonard Davis Institute.  His profile there explains his former work at McKinsey thus,


McKinsey & Company does not advertise its clients, but it is likely that the Payor/ Provider group worked with major, non-profit and for-profit hospital systems and health insurers.  Its website discusses its "payor strategy" thus,

The challenges facing the leaders of payor organizations—improving financial performance, increasing cost effectiveness, improving population health status, and boosting quality of care—are not new. What is different today is the increasing need to address them all.

Our strategy work focuses on driving value. The starting point varies depending on the clients and geography, but whether we are supporting a public payor, a private payor, or a mix, we have a deep understanding of the complexities our clients face and can draw upon our international experience for best practices and key insights.


So presumably Mr Tango's responsibilities including the cost effectiveness of commercial health insurance firms and quite possibly for-profit hospital systems.  In his new position with CMS, Mr Mango may be in able to influence how big payors and providers interact with the Medicare and Medicaid systems, potentially to their benefit.

On July 24, 2018, an announcement from CMS noted that Chris Taylor was joining the organization along with Mr Mango,

Chris Traylor joins the Office of the Administrator as the Deputy Administrator for Strategic Initiatives. Chris comes to CMS with over 26 years of public sector service in the area of healthcare and social services. His lengthy public service career in Texas concluded in 2016 when he retired as the Executive Commissioner of the Texas Health and Human Services Commission (HHSC) after previously serving as the commission’s Chief Deputy Executive Commissioner.


So it appears Mr Taylor has a long experience in health care management within state government.  I could find nothing to indicate he has any direct experience or expertise in medicine, the actual provision of health care, or public health.  But also,

Since 2016, Chris has been leading a healthcare consulting firm serving clients in hospital operations and finance, long term services and supports, dental and oral health services, managed care and bio-health.


It appeared that since 2016, he worked for the Advanced Perspectives Group, which is, per its web-site,

a newly formed consortium of uniquely qualified consultants who have worked extensively in the health and human services arena both at the state and federal levels. Collectively, we have over 200 years of experience working in a variety of leadership positions in state and federal government. This experience brings our clients an important resource and an unparalleled understanding of agency operations and policy formulation-which enables us to help our clients create solutions that fit within the framework of Texas Health and Human agencies, their federal partners, and the policies that fall within those jurisdictions.


Advanced Perspectives Group, like other commercial health care consultancies, does not advertise its clients, but the biographies of individual principals suggest that clients include for-profit health care corporations.  Again, in his new position Mr Traylor may be able to influence how such corporations interact with Medicare and Medicaid.

So this round of revolving door transitions featured a top pharmaceutical company researcher going to a leadership position at the NIH, which was considered long ago as a producer or unbiased science; and one physician-manager and two pure managers going from big management consultancies to DHHS.  All these consultancies seem to have thriving businesses working with big commercial health care firms. So the Trump regime continues to stock top health care leadership positions with people from the commercial health care world.  These leadership positions will allow them to to control contracting with, policies that affect, and regulation of big health care corporations, including those they worked with or for, and their competitors, for that matter.

So, as I have said before, e.g., three and four months ago,

The ongoing parade of people transiting the revolving door from industry to the Trump regime once again suggests how the revolving door may enable certain of those with private vested interests to have disproportionate influence on how the government works.  The country is increasingly being run by a cozy group of insiders with ties to both government and industry. This has been termed crony capitalism. The latest cohort of revolving door transits suggests that regulatory capture is likely to become much worse in the near future.