At my Sept. 22, 2011 post "NPfIT Programme goes PfffT" I wrote about the £12.7bn National Programme for IT in the NHS (National Health Service) in the UK being ended after years of delays, technical difficulties, contractual disputes and rising costs. I had predicted this for years.

Now the New York Times has felt this to be News Fit to Print. The NYT may be alone in terms of US coverage of this situation by national newspapers:

Government press releases tend to be bland, earnest blather. But not one posted on the British Department of Health’s Web site last Thursday. Its headline: “Dismantling the NHS National Programme for IT.”

To translate the acronyms a bit, the NHS is Britain’s state-run National Health Service and the program in question was the ambitious drive to computerize England’s health records and let doctors, clinics and hospitals share patient information electronically. The project, begun in 2002, was budgeted at £12 billion (about $19 billion) and the government hailed it as “the world’s biggest civil information technology program.”

Now, regrettably, it likely holds the honor as the "world's biggest civil IT failure."

The British digital health project has been a slow-motion train wreck for some time with last week’s announcement mainly confirmation — and a pledge to change course. (The announcement was also a political gesture, as the Conservative government of David Cameron tries to get as much distance as it can from an unpopular initiative, begun by Tony Blair’s Labor government.)

I addressed train wrecks at my Jan. 20, 2011 post "Healthcare IT Delirium" and showed this picture and caption, only with respect to our own 'National Program for IT in the HHS': 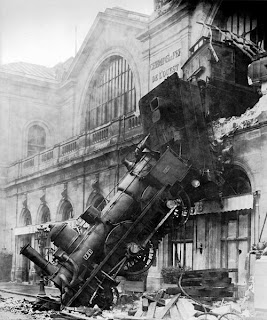 Running off the rails. We seem to be going out of our way looking for this with HIT, sending it out full speed ahead on far too short a track ...

Back to the NYT:

Yet the United States is about to begin its own government-funded drive to accelerate the adoption of electronic health records, with Washington set to hand out more than $20 billion in incentive payments over the next five years. So what are the lessons to be learned from the English experience?

The lessons are mostly covered in this article:

Pessimism, Computer Failure, and Information Systems Development in the Public Sector. (Public Administration Review 67;5:917-929, Sept/Oct. 2007, Shaun Goldfinch, University of Otago, New Zealand). Cautionary article on IT that should be read by every healthcare executive documenting the widespread nature of IT difficulties and failure, the lack of attention to the issues responsible, and recommending much more critical attitudes towards IT. link to pdf

In that article's abstract is nearly all a citizen needs to know:

The majority of information systems developments are
unsuccessful. The larger the development, the more likely
it will be unsuccessful. Despite the persistence of this
problem for decades and the expenditure of vast sums
of money, computer failure has received surprisingly
little attention in the public administration literature.
This article outlines the problems of enthusiasm and
the problems of control, as well as the overwhelming
complexity, that make the failure of large developments
almost inevitable. Rather than the positive view found in
much of the public administration literature, the author
suggests a pessimism when it comes to information systems
development. Aims for information technology should be
modest ones, and in many cases, the risks, uncertainties,
and probability of failure mean that new investments
in technology are not justified. The author argues for a
public official as a recalcitrant, suspicious, and skeptical
adopter of IT. [Irrational exuberance is forbidden! - ed.]

Back to the NYT article again:

I asked three of the best-informed experts on this subject, with firsthand experience in government and health policy: Dr. David J. Brailer, the national coordinator for health information technology in the Bush administration; Dr. David Blumenthal, who held that position in the Obama administration for two years, before recently returning to Harvard; and Richard C. Alvarez, chief executive of the Canada Health Infoway, the nonprofit corporation established to push the adoption of electronic health records in Canada.

Here are some of their comments.

Dr. Brailer on the problem: “What we’re seeing in Britain is the final result of a number of fundamentally bad decisions. … It was classic top-down re-engineering that was forced upon physicians and nurses. The British government treated it as a big procurement program, putting out bids, selecting contractors, picking winners and concentrating their bets. They crushed what had been a pretty vigorous health information technology marketplace in Britain.”

In 2006 or so at a national informatics meeting, I asked David Brailer, then Director of ONCHIT (now ONC) and who I knew from his role prior to that, the question "The UK's NPfIT is having severe difficulties. What are we in the US to do regarding our own program?"

His response: we will learn from their mistakes.

Have we done that? I don't really think so.

... Mr. Alvarez on how Canada and the United States are doing things differently than Britain: “As governments, we’re setting strategy, standards and outcomes in terms of what qualifies as the meaningful use of electronic health records. But we’re not doing the implementation. [Or product selection - ed.] That has to be done at the local level.”

Considering the sorry state of the healthcare IT ecosystem (link), and considering that significant problems in the NPfIT were created through their use of American IT vendors and consultants, that may actually be a mistake, as opposed to picking a product or products and producer that have been vetted by true, unconflicted experts instead of bureaucrats. We may have learned the wrong lessons from the UK's experience.

Another example where we may have learned the wrong lessons:

Dr. Blumenthal on the perils of trying to mandate changes in the work habits of doctors: “In a complex health system, you have an enormous number of independent actors, especially in a system like ours, but in England more than they thought. Physicians and health care professionals have to be part of the process every step of the way. You need to make this a collaborative effort, not a top-down procurement project.”

I believe there has to be a balance of the two: one cannot have pure bottom-up or top-down. It does not work in the setting of a national health IT program. Local politics can be (are?) as bad as, or worse than, national politics.

Dr. Brailer agreed and elaborated: “The experience in Britain is a warning to us. The thing that brought them to their knees was the confrontation with doctors.”

There, I have no arguments, with the additional comment that what also brought them down was this Scott Adams adage:

IGNORING THE ADVICE OF EXPERTS WITHOUT A GOOD REASON

Example: Sure, the experts think you shouldn't ride a bicycle into the eye of a hurricane, but I have my own theory.

InformaticsMD found that the NY Times has now reported on the "slow motion train wreck" that has been the UK NHS electronic health record project. This brings into the mainstream the notions that electronic health records, and other ballyhooed health care information technology is not a panacea, and that rushing what amounts to medical devices into use before they have been fully developed and adequately tested was not a good idea.

Note that this is not an effort to bash the British. In the US we have not had any obviously better ideas about using health care IT, and much of the technology is shared across countries and marketed by multinational companies. But IMHO, health care IT has been pushed in many countries because it has benefits for big health care organizations:

1) Government agencies (bureaucrats love having numbers to crunch, and health care IT facilitates the use of the guidelines they love to push to show they care about health care quality);

2) Health care insurance companies, non-profit or for-profit (because it facilitates their transactions, and facilitates guidelines as above); but also

3) Drug and device companies (because it allows incorporation of the clinical guidelines they have worked to hard to manipulate to market their products);

4) Hospitals and hospital systems (because it gives their managers more numbers to crunch, and more oversight and power over health care professionals);

5) Not to mention, of course, health care technology corporations.

This taxonomy of why health IT has been pushed is rather predictive of the ills seen with this experimental technology.

Phrases from the NY Times report key to understanding the enormity of the problem in the US:

In the US, the patients are being wrecked by the flawed HIT being operated by doctors who find it terribly unusable.

Incentives? For what? To get overworked physicians to use equipment that endangers and kills patients? Are doctors that greedy to take this bloodied money?

David Blumenthal: “In a complex health system, you have an enormous number of independent actors…”

Did Blumenthal consider himself an actor in the façade of experts obfuscating the contagion and dangers of HIT?

Canada’s Richard Alvarez: “…we’re setting strategy, standards and outcomes in terms of what qualifies as the meaningful use of electronic health records….”

David Brailer: “The experience in Britain is a warning to us…”

But no one is heeding the warning, including Brailer, Blumenthal and Alvarez. No one is listening while the patients are being maimed and killed in the US by the same EMR systems that were the train wreck of the UK.

The NY Times did an excellent job of coveriung the UKI HIT fiasco.

If only it would pursue the fraud and deception of the HIT vendors and industry in the USA.