Propofol and Other Drug Questions: Was Michael Jackson a UPMC Patient at the Same Time as Samuel Sweet?

At my Sept. 24, 2011 post "UPMC and the Sweet death that wasn't very sweet: How EMRs can detract from a clear narrative, and facilitate spoliation and obfuscation of evidence" I wrote a detailed summary of a civil medical malpractice Complaint regarding possible electronic chart alteration. As I pointed out, that Complaint made EMR metadata visible to laypeople for the first time that I am aware.

A new docket has appeared in that case entitled "Interrogatories to Defendant" from Attorney/physician Deborah Maliver dated Sept. 27, 2011.

This document is publicly downloadable from the Pittsburgh Prothonotary Office Civil Docket site at this link, case #GD-09-019407, document #55, or at my cached version at this link (PDF).

It brings up questions of even greater concern to me as a physician, those of mysterious drug orders for powerful sedatives such as propofol, fentanyl and etomidate. Apparently the metadata makes it difficult to account for what could be questioned as "over-generous" dispensing of those drugs.

(This is ironic, since the trial of the doctor who administered this drug to deceased singer Michael Jackson has itself just gotten underway.) 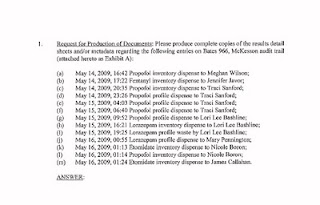 Question 1. Request for full metadata on these drugs (click to enlarge) 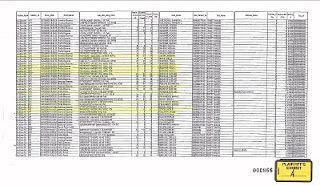 Exhibit "A". McKesson drug cabinet dispenser audit trail. Five 100-ml vials of propofol in a row from May 14-May 15? Lorazepam (ativan), propofol and etomidate on May 15-16 at a time when a patient had a deteriorating respiratory status? (These drugs suppress the respiratory drive.) Click to enlarge.

Apparently none of these drugs appeared in the eMAR system, the electronic medication administration record. Where did they go? I hope the full audit trails will show a definitive final disposition of these drugs.

One would hope a highly computerized medical center could keep track of its inventory of drugs of powerful potential for abuse with 100% certainty, chain-of-custody style (that means, 0% guesswork):

Chain of custody (CoC) refers to the chronological documentation or paper trail, showing the seizure, custody, control, transfer, analysis, and disposition of evidence, physical or electronic.

This is of concern to me as a former Occupational Medicine physician (in the transit industry) and a physician in general. I've seen drug abuse result in train wrecks - literally. Drug abuse/failure to be able to track disposition in a hospital would represent a prima facie public health menace.

There are also questions about whether users of the EMR signed in or used the accounts of other individuals, which is another weakness of the EMR. No handwriting to evaluate...

Here is a horrible example of what can go wrong when drugs of abuse potential are not tracked with the utmost of rigor:

"Hi, love," Sarah May Casareto greeted Larry V. King as he lay on a gurney before surgery. As they wheeled down the hall, he recalled in court records, she told him that he'd have to "man up" because they couldn't give him a lot of medication.

The next 57 minutes of surgery were excruciating, according to a lawsuit filed Tuesday in Hennepin County District Court that accuses the drug-addicted former nurse of skimming his narcotics, which left him "writhing in pain" during a medical procedure for kidney stones last year at a Minneapolis hospital.

Casareto, of Forest Lake, entered an Alford plea of guilty Sept. 1 to a fifth-degree controlled substance crime for possessing Fentanyl, a high-powered painkiller, and was sentenced to probation in connection with the Nov. 8 incident at Abbott Northwestern Hospital. The plea enabled Casareto to maintain her innocence while acknowledging ample evidence to convict her.

The suit, which seeks at least $50,000 in damages, alleges that she was "negligent and careless" in her care for King, 57, of Bloomington. The suit also names Abbott as a defendant.

It contends that Abbott "knew or should have known [before the procedure] that Casareto was exhibiting drug-seeking behavior and that she had become dependent upon narcotic pain medications." It also notes that Abbott officials knew that she had failed "on at least six different occasions" to properly handle patients' pain medication obtained from the hospital pharmacy.

King's attorney, Tony Nemo, called the lawsuit reflective of "a growing problem" that should draw closer scrutiny to drug diversion, or the theft of medications intended for patients.

"One of the things I know Mr. King is hoping is that this case may cause Twin Cities hospitals to reveal procedures and protocols to, if not prevent, at least minimize this problem in the future," he said.

I wonder if information technology problems regarding tracking of drugs with abuse potential existed.

Read the whole article at the above link.

Another question for UPMC executives is its coming involvement with a plan by Sanofi to offer allergy testing through the Giant Eagle grocery store chain based in Pittsburgh, as reported by pharmalot?

The plan is that the grocery stores will offer allergy testing and then an action plan featuring Sanofi products. Questions have to arise over the accuracy of the test and the opportunity for abuse of OTC drugs.

Living west of Pittsburgh, in a community with a very aggressive hospital, I have to question the drive on the part of marketing and hospital executives to medicate the population. Testing and medication drives profits for drug companies and hospitals, and may be of little benefit to patients.

It appears that even going to the grocery store for a loaf of bread has become a pharma marketing opportunity, especially if the drug being sold has been shown to be no better than cheaper alternatives.

Why don't they do rectal exams for cancer screening there as well, and pap smears?

One stop shopping. Buy your food, get your orifices checked.

Sorry vendors, you are all charging excessively for products that are inferior and insufficient for the care of the complex patient.

They might be ok for simple one problem cases such as hang nails.

Otherwise, the impediments to safety are enormous and require ongoing construction of workarounds.

What we do find in my community is a large number of doctors who feel they have a “right’ to perform this type of invasive testing, not only that, they will withhold a required physical report unless the person agrees.

What we also find is that many of these same doctors have a relationship with the hospital or specialist where patients are sent with the obligatory follow-up question.

The whole system is designed to capture a patient and their insurance dollars. Once in the system the patients is assured that only through repeated testing and office visits can they achieve perfect health. Since our bodies are in a constant state of flux, I have no idea what constitutes perfect health.

The fallacies here are numerous. First: testing can only reflect what is taking place in a person’s body; it has no therapeutic effect on its own.

Second: testing places a person at physical risk at the time of the test, and raises the issue of false positives generating additional testing.

With these two points in mind a friend, who is on a 90 office cycle with his doctor and has no known medical issues, went today for a free screening sponsored by a local hospital.

So, if medicine is good, more medicine must be better. The problem is modern medicine is killing the patient, or at least making life miserable.

The hospital knows of the sloppy care and lax controls and calls it "life changing medicine" in its touchy feely adverstisements colored in purple on all of its envelops and commercials.

Simply stated, no one cares. These executives play with Other People's Money. Save or lose, they win.