The bureaucrats always seem to find new ways to waste precious medical resources and capital to justify their existence.

I regularly feed swans, ducks and geese at my local park. In fact, I don't seek them out; the geese in particular come to me when they see me on the trail. They know me for years.

They have tremendous vision, so I can't escape them.

Per the WSJ, medical coding is about to become so hypergranular (could the reason be that bureaucrats needed work to do?) as to be reasonably considered insane:

Walked Into a Lamppost? Hurt While Crocheting? Help Is on the Way

... Billing experts who translate doctors' work into codes are gearing up to start using the new system in two years. They say the new detail is welcome in many cases. But a few aspects are also causing some head scratching.

Why are there codes for injuries received while sewing, ironing, playing a brass instrument, crocheting, doing handcrafts, or knitting—but not while shopping, wonders Rhonda Buckholtz, who does ICD-10 training for the American Academy of Professional Coders, a credentialing organization.

... Much of the new system is based on a World Health Organization code set in use in many countries for more than a decade. Still, the American version, developed by the Centers for Disease Control and Prevention and the Centers for Medicare and Medicaid Services, is considerably more fine-grained.

The WHO, for instance, didn't see the need for 72 codes about injuries tied to birds. But American doctors whose patients run afoul of a duck (see codes), macaw (see codes), parrot (see codes), goose (see codes), turkey (see codes) or chicken (see codes) will be able to select from nine codes for each animal, notes George Alex, an official at the Advisory Board Co., a health-care research firm.

There are 312 animal codes in all, he says, compared to nine in the international version. There are separate codes for "bitten by turtle" and "struck by turtle." (See codes.)

Sometimes my favorite Canada Goose couple, George and Martha, and their annual young'uns will overextend their beaks when being fed and nip my finger. They've never broken my skin (geese have no teeth, just ridges) but if they do ... my doctor is likely to have to code for "bitten by Canada Goose."

I wonder if CDC will then send out the Goose Patrol. George and Martha, be careful, or your goose may be cooked! 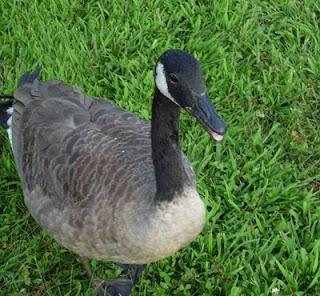 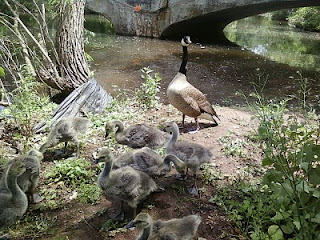 Young'uns, you better watch out, too! 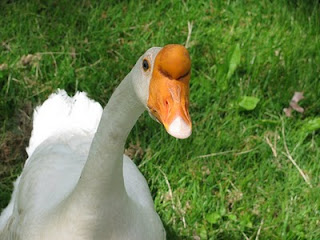 This guy has already done a W6152XA and W6152XD to me with his wings, leaving me with a W6152XS (bruise on my leg) when I didn't feed him before the Canadas! You can just tell he's looking to create coding mayhem from that expression on his face. 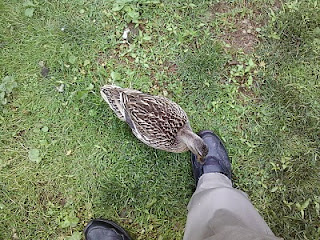 Is there an ICD-10 code for "foot bitten by cute little Mallard duckie?"

What a perverse waste of resources this coding mania represents...

Of course, the inevitable, completely predictable result of this is that coding will become LESS accurate and even less useful for research purposes than it already is.

No doctor is going to wate time doing this. The front desk will be instructed to use one hypertension code exclusively, one diabetic code, one coronary artery disease code, etc. The data will be worthless.

What! No code for "shop-until-you drop"?

No doctor is going to wate time doing this. The front desk will be instructed to use one hypertension code exclusively, one diabetic code, one coronary artery disease code, etc. The data will be worthless.

Then the authorities will likely use data mining and AI to charge the doctor with fraud...

What! No code for "shop-until-you drop"?

You can write to them to let them know they missed one.

This is progress. How can anyone complain?!

I think it is more important for the doctor to spend more minutes to code so that the researchers know the color of the snot using codes to the 4th place, than to cure the snot.

What the code for bitten by dracula..????

The AMA is responsible for this muck pool of coding. Send the AMA a thank you by cancelling memberships.

I forgot about the two mute swan cygnets that went over the waterfall in the park when they were about a week old. I had to retrieve them.

When carrying them back above the waterfall to their parents, one pooped on my sneaker. See pic here.

We clearly need an ICD-10 code for "shat upon by cygnet."

Many people enjoy feeding birds and other animals, and even have them as pets, so I wouldn't be surprised that at least a few HCRenewal readers have had interesting experiences similar to those you share in this post.


That makes it all the more appropriate that come October 1, 2013, medical practices and hospitals all over our country will have the opportunity to save more lives of bird enthusiasts, and other unintended victims, from death due to infection with a highly contagious and lethal
pandemic virus carried by these birds. If these ICD-10 codes that represent bird-related injuries are used and acted upon, they can go a long way toward controlling a pandemic such as H1N1.


It is lamentable that medical practices throughout rest of the world had many years to grow in their use of the ICD-10 coding system to the ~181,000 sized giant it is today, while our country will have a only few scant years. It is sad that for the US, ICD-10 codes will be more tightly tied to insurance reimbursement compared to the rest of the world. It is also very sad that the cost of implementing ICD-10 in the US is estimated to be more than the costs associated with implementing and maintaining an EHR.


From what I have read, the October 1, 2013 deadline for ICD-10 use is very, very firm. Medical practices not
prepared for ICD-10 at that date may incur severe financial penalties (via denied insurance claims) starting October 1, 2013. Many may have to refuse health insurance-based payments (turn down patients).


However, even with all of these factors affecting implementation and intended long-term benefits of ICD-10 use, healthcare consumers might still be able to benefit from the knowledge that the WSJ article imparted on ICD-10. In that article, there is a link to a search tool for looking up ICD-10 codes:


To HCRenewal readers: I suggest you regularly use the search tool accessed from the above link. See how well the codes found, for illnesses and injuries experienced by you or loved ones, match the ones your doctor assigns visits made on or after October 1, 2013. This exercise in clinical data management performed by you, an
ICD-10 coder, and your doctor, could end up saving your life, even if the code(s) you propose are downright wrong. This exercise may well help speed up the data management work for doctors' clinical notes that needs to happen.


What is good about ICD-10 is that the world's combined contributions to its rich content were made to support better clinical care and patient outcomes. Will it have a fighting chance in the US?

That makes it all the more appropriate that come October 1, 2013, medical practices and hospitals all over our country will have the opportunity to save more lives of bird enthusiasts, and other unintended victims, from death due to infection with a highly contagious and lethal pandemic virus carried by these birds

I don't think getting struck (that is, whacked by a goose's wing) spreads viruses. I think they've gone way overgranular here.

I know walking into a lamppost definitely does not spread viruses.