At my Oct. 2, 2014 post "Did Electronic Medical Record-mediated problems contribute to or cause the current Dallas Ebola scare?" (http://hcrenewal.blogspot.com/2014/10/did-electronic-medical-record-mediated.html) I questioned a possible role for an EMR-related mishap, including known disruptions of teamwork and suboptimal presentation of information, to have contributed to or led to the release of a man carrying the Ebola virus from a Dallas Hospital.

I then related how the press reported, the very next day, that this was indeed the case.

Now...gee whiz...the hospital changes its tune. "No, it wasn't the EMR after all!"

See "Hospital reverses explanation for fumbling Ebola case" at http://www.dallasnews.com/news/metro/20141003-hospital-reverses-explanation-for-fumbling-ebola-case.ece. The reversal strains credibility and sounds like redirection, to my ear possibly due to inside attorney and/or EMR company attorney pressure.

The "new explanation" itself per the new article is that:

... A written statement Thursday said hospital officials identified and corrected “a flaw in the way the physician and nursing portions of our electronic health records (EHR) interacted in this specific case.” That statement implied, without directly saying it, that the flaw left the doctor uninformed about Duncan’s travel history. In Friday’s statement, though, the hospital said, “The patient’s travel history was documented and available to the full care team in the electronic health record.” “There was no flaw in the EHR in the way the physician and nursing portions interacted related to this event,” the statement said.

Again, sounds like redirection and making the doctor (and perhaps the ED doctor's group, if they were contractors) the sole scapegoat.

"Available to the full care team?"  "Available" in a complex computer system with myriad screens is a very relative term.  The issue seems not "how the physician and nursing portion interacted", it is "how the physician portion made the information readily apparent to the physicians and other team members, or not."

The problem here, I believe, still likely amounts to "information hard to find" and "suboptimal support of teamwork (situational awareness)", among others, per the AHRQ hazards taxonomy.

See, for instance, this.  Either it is true, or not, regarding the travel history: 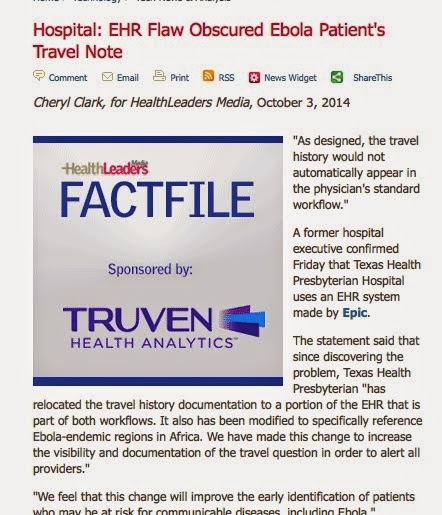 I think an impartial investigation is needed to get to the truth.

What we have now is likely healthcare defense attorney and/or risk management "fog", a phenomenon I have both professional and (sadly) personal experience with.

One also wonders if the EHR vendor had a contractual defects non-disclosure ("gag") clause with the organization, and is now threatening suit, leading to the retraction.  (See http://cci.drexel.edu/faculty/ssilverstein/cases/?loc=cases&sloc=koppel_kreda for more on that issue, and of corporate "hold harmless" clauses).

Unfortunately, a comprehensive investigation would be likely to only occur in a courtroom via Discovery if others become infected.

If any reader has knowledge of details, my email address is scotsilv AT aol DOT com.

Addendum: A medical informatics colleague, Dr. William Goossen of the Netherlands, sent me a reminder about this article on the de-professionalizing aspect of health IT:

Some content of this study - Nurses who participated in this study felt to some degree:


There is a human aspect to computerization in medicine that is often overlooked, especially by the health IT hyper-enthusiasts (see http://hcrenewal.blogspot.com/2012/03/doctors-and-ehrs-reframing-modernists-v.html).

Perhaps the ED staff at the Dallas hospital needs to be surveyed on these issues.

This was submitted to me by another physician who wishes to remain anonymous:

I believe the diagnosis of Ebola was missed because of the Electronic Healthcare Record.

Before EHR, the nurses and physicians would not have been preoccupied getting data into templates.

Nurses and the ER doc would have gabbed with each other, noticed that someone from another country
had presented, even discussed his interesting accent. This would have surely segued to someone in the group recognizing a potential problem.

I was a specialist in a primary care HMO when EPIC beta was inflicted on us.

The docs, several per office pod, stopped discussing cases, stopped the "aha" moments that happened while seeing patients, and had their faces in the computer, pecking away.

Even if someone had an idea, they kept it to themselves, because no one wanted to interrupt the flow or anxious focus on data entry.

Diagnoses were missed because the medical assistant had entered incorrect symptoms, the wrong template was brought up, and incorrect meds or workup ordered.

Even if the template travel was checked by the intake staff,
there is way too much fluff to slog through in templates, for coding purposes, for an ER doc or any other doc to read.

Why ask a history anymore.. it means more to enter, and the diagnosis might not even be available in the computer system.

This patient would have been recognized had the ER staff actually interacted with him, and each other.

No one can listen when clicking.

No one can listen when they will have to click.

Indeed, the devices sap the intellectual power of the users, disrupting their thought. The focus of the user is on the device and not the case.

As for the retraction, you can bet your bottom dollar that the folks at Epic influenced the decision to make up the real truth.

Scot, this incident may prove to be a turning point in the evolution of EHR, whatever the "reason" for the failure. Recall the "jumbo jet" analogy for adverse events in healthcare? That is fundamentally flawed, simply because when failure occurs at 30 thousand metres those in the cockpit are at equal, or greater, risk. Not so (up till now) with healthcare systems - the only pain (if any) to operators and administrative systems was financial and reputational, while the patients were being hurt or killed.
Now, with a contagious agent like Ebolavirus, with no vaccines and no antivirals, when there is a failure to act on available information, it's the operators and attendants who are at most risk. So, it's in the interests of everyone at the sharp end of acute healthcare to find out about the remediable weaknesses in EHR systems.
Pressure to re-order priorities of design of systems that have direct effect on human health may (should) come from another direction - the requirements of modern land armies. The US military is being deployed to assist with the African Ebolavirus epidemic. Pressure is being put on the Australian Army to do likewise, but this suggestion is being actively hosed down by Government. The Australian counter-insurgency expert, David Kilcullen, wrote http://apo.org.au/research/australian-army-urban-networked-littoral recently where he noted
"Cholera has a short incubation period (0.5 to 4.5 days); diseases with longer periods such as Dengue (3 to 14 days) or Ebola (2 to 21 days) may be brought on board by a landing force, spreading widely before the first patients become sick, with devastating operational effects."
He is probably referring to logistical considerations, but dengue is not directly transmissible and Ebolavirus is not transmitted during the incubation period. Despite those errors, Kilcullen is worth reading for his exposition of the importance of electronic communications. Of course, a army from the West going in to, say, Lagos, in the midst of civil turmoil and an Ebola outbreak would be relying on their electronic networks just to maintain their own integrity. In those circumstances, the US Army could not afford the risk of a small mistake in software, data entry or data transmission causing a widespread catastrophe. One may think that the processes of development of software systems used by Army (or Boeing) would be applicable to healthcare.

All readers should demand to the FDA that it investigate the defective device.

All EHR systems create silent silos where data is hiddne and not given to the decision maker doctors. If they have to search for it, patients will suffer.

It is scandalous that the information from those health care workers and nurses who spend most time with the patient puts their key finding in silent silos.

I'm amused (or, perhaps, bemused) by the anti-EMR attitude. Here in Japan, my PCP has EMR, and I absolute love it. I come in to his office, sit at the side of his desk _where I can see the screen_ and he enters stuff while talking to me, and shows me what he's doing with the record. I'm quite fond of my PCP, but he sees enough patients that he really can't remember everything about each patient. But it's all on the screen. Every prescription, every blood test. For more than 5 years. And he can scroll through them quickly to see if anything is changing over time. It's really wonderful.

Are US software developers really that bad? Or are US MDs just being jerks on this? As a software type, I'd be happier with the latter, but the former is more likely. Sigh.

EHRs are good for the worried well, but dangerous due to their error promoting functions for the complex patient and those with ambiguous illness.

Besides, there have never been systematic review and analysis of the deaths, injuries, and near misses. In the UK, the docs called them " not fit for purpose".

You sound like you may be a charter member of the worried well.

I'm amused (or, perhaps, bemused) by the anti-EMR attitude.

Not sure what anti-EMR attitude you're referring to.

Good Health IT ("GHIT") is defined as IT that provides a good user experience, enhances cognitive function, puts essential information as effortlessly as possible into the physician’s hands, can be easily, substantively and cost-effectively customized to the needs of medical specialists and subspecialists, keeps eHealth information secure, protects patient privacy and facilitates better practice of medicine and better outcomes.

Bad Health IT ("BHIT") is defined as IT that is ill-suited to purpose, hard to use, unreliable, loses data or provides incorrect data, is difficult and/or prohibitively expensive to customize to the needs of different medical specialists and subspecialists, causes cognitive overload, slows rather than facilitates users, lacks appropriate alerts, creates the need for hypervigilance (i.e., towards avoiding IT-related mishaps) that increases stress, is lacking in security, compromises patient privacy or otherwise demonstrates suboptimal design and/or implementation.

Classic "No patients were endangered." doublespeak.

Orwellian pronouncements are not believed by the public. We hear them and lose a little more faith everyday.

The folks at the top really believe we are dumb. Powerless maybe, but not dumb. Treat a horse poorly and eventually he kicks back.

All EHR systems produce silent silos wherever information is hiddne and not given to the choice maker doctors.