Many issues brought up at the 18th International Anti-Corruption Conference (IACC) in Copenhagen, Denmark, were relevant to the problems of conflicts of interest, crime and corruption in health care which we often discuss on Health Care Renewal, and hence bear repeating here. 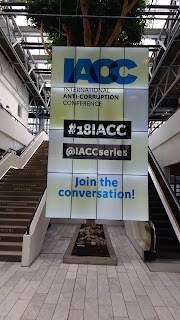 The discussion certainly got at the complexity of fighting corruption, seemingly one of many necessities that has come into light in the new political era.  Unfortunately, while the complexity is fascinating, it suggests this fight will hardly be simple.  Since warnings about corruption go back thousands of year, we already knew it would not be easily, if ever totally won.

Reported in the order they came up at the conference...

At the Opening Ceremony, Lars Lokke Rasumussen, the Prime Minister of Denmark, underlined the importance of journalists and activists holding leadership accountable. Yet the corrupt will tend to defend their interests by attacking such people. (Thus we have noted that corruption in health care, in particular, has long been a taboo topic, the anechoic effect.) Things can get very bad when a country is governed by the corrupt, and worse when these rulers are despotic.

The hazards of being a whistle-blower, activist, and/or journalist holding the powerful accountable were emphasized by Huguette Labelle, Chair, International Anti-Corruption Conference Council, in that same session, who remembered those who have lost their lives for doing so.  Also at that session, Delia Matilde Ferreira Rubio, Transparency International Chair, warned that despots may hijack the narrative, turning watchdogs into their lapdogs, and into attack dogs against their political opponents. On the other hand, watchdogs who refuse to cooperate may be punished or killed.

At the Day 2 Plenary 3 Session on Exposing the Corrupt, Knocking Out Impunity, Barbara Trionfi, Executive Director, International Press Institute, noted that deception, propaganda, and disinformation may be used to mobilize attacks against whistle-blowers and real journalists, perhaps government responses to such attacks might help, at least if the government has not been totally captured.

At the Day 3 workshop on Is the American Anti-Corruption Model Broken, Frank Vogl, Advisory Council Member, Transparency International, noted that there are now daily threats in the US to the free press, while the opposition party is assailed as a “mob.” Moreover, the US government institutions, such as the Department of Justice and the FBI, that often used to protect the free press, among others, from threats of violence, are themselves under constant attack from the top of the administration.

At the Day 1 Fighting Corruption in“Post-Truth” America workshop, Danielle Brian, Executive Director of the Project for Government Oversight, noted that pre-2016, her organization was mainly concerned with the problem of conflicts of interest created by the revolving door, especially to and from the defense industry and big pharma. Since the election, the administration generated an atmosphere of “conspicuous corruption in which shame does not matter, and in which human rights are now under threat." (See what we recently posted about fighting corruption under a corrupt regime.)

At the Day 2 Fight Against Corruption as a Threat to Democracy workshop, one participant suggested that fighting corruption at best requires stable, functional specific anti-corruption institutions. While some countries have such institutions at the national level, the US does not. So at the Day 3 workshop on Is the American Model of Anti-Corruption Broken, Harvard Univeristy Professor Matthew Stephenson noted that the current US susceptibility to corruption may be partly due to the country's history of relying on norms rather than laws to address corruption. The Trump administration has set itself up as a norm violator, with so far little pushback.

Furthermore, people subject to corruption may tend to go down extremist pathways, as noted at the "Post-Truth" workshop by Sarah Chayes, former Senior Fellow at the Carnegie Endowment for Peace.  At that workshop, Nora Gilbert, Director of Strategic Projects and Partnerships, Represent.US, asked whether populist anti-corruption rhetoric, e.g., about “unrigging the system,” could be leveraged without going down the authoritarian pathway?  If not,  corruption may generate despotism, which in turn generates more corruption, a positive feedback cycle.

The concern about how emphasis on fighting corruption could have the unintended effect of boosting authoritarian or despotic rulers was the subject of the Fight Against Corruption as a Threat to Democracy workshop. The audience was asked not to attribute quotes to participants, but I noted the following sorts of observations.  The war on corruption can be seen as a war on politicians, parties, and institutions, and so can increase cynicism while risking pulling the whole system down. Even so, since strong supporters of certain politicians tend to disbelieve any negativity about them, including corruption allegations, such a war can leave the most corrupt offenders standing.

Yet corruption is itself a huge threat to a reasonable democratic political system, because it robs people of votes, free speech, and the rule of law. Corrupt politicians do not shrink from protecting themselves by attacking votes, speech, and legal actions that threaten them.

Ideally, it is thus better to tackle moderate corruption early, because a scorched earth attack on severe corruption may be as hazardous as the corruption itself. (Not to toot our own horn, but at Health Care Renewal, we have been trying to challenge health care conflicts of interest, corruption, and crime long before the current unpleasantness.)

At the Fight Against Corruption as a Threat to Democracy workshop, Sarah Chayes noted that now in the US and many other places, corruption is now systemic, the standard operating system of trans-national kleptocratic networks. At an IACC a decade ago, embedded networks of influence were shown to be vehicles of corruption.  They have apparently gone global. They may use extreme measures to preserve their power. One they have become especially good at is exploiting identity divides.

At the Day 2 Plenary Session, Breaking the Global Corruption Web, Sarah Chayes further discussed how the networks were enabled in an era of predatory capitalism in which everything has its price. The networks' work is facilitated by finance firms, shell corporations, and reputation and money launderers. Rajiv Joshi, Managing Director, the B Team, noted that the Lewis Powell memo of 1972 provided the blueprint, by showing how big US corporations to use their public relations/ propaganda resources to capture the US government.

Claudia Escobar, former Magistrate of the Court of Appeals of Guatemala, stated that the networks intertwine private companies, government, and organized crime. (Note that we have discussed some of the links between organized crime and the current US administration.) The melding of these entities was further emphasized by Monique Villa, Executive Director, Thompson Reuters Foundation, who urged us to always follow the money: asking again and again, cui bono? Who benefits?

This was underlined by Kumi Naidoo, Secretary-General Designate, Amnesty International, speaking at the Breaking the Global Corruption Web plenary. He accused some parts of the global media, plus social media technology corporations, of complicity with the global kleptocratic network. He suggested that in the US, the in your face corruption of the Trump administration is enabled by the large minority of Americans who only believe what they see on extreme right-wing media and social media.

Yet as Thomas Hughes, Executive Director, Article 19, pointed out in the Day 2 Plenary, Exposing the Corrupt, Knocking Out Impunity, the way to attack deception, propaganda, and disinformation may not be government regulation which risks censorship, especially if the government is corrupt, much less despotic. Will Fitzgibbon, Reporter, International Consortium of Investigatve Journalist, suggested it would be better to form alliances, preferably international, of journalists and whistle-blowers, like the group that published the Panama Papers.

I would submit that the issues brought up at the conference suggested three themes, all disturbing.

First, corruption has become increasingly systemic and global.  The embedded networks of influence, which seemed to be national pheonomena a decade ago, are now global and supercharged, encompassing government, the private sector, and organized crime.  Thus they can be termed global kleptocratic networks.  Here in the US, it is most disturbing that the country seems to be governed by one such network.  Our president and his family continues to run the Trump Organization, a global, albeit mysterious set of businesses which has had documented links to both domestic US and overseas organized crime (look here).

As corruption increases, wouldbe and actual despots increase their populist appeal by claiming to be anti-corruption (in the US, we heard "drain the swamp.")  Yet despotic regimes often foster even more corruption, but then might blame it on others, while continuing to proclaim their drainage skills.

Enabling by Public Relations, Propaganda and Disinformation in an Era of Social Media

Shady business practices and shady politics have long been enabled by public relations (which Bernays thought sounded better than "propaganda") and the disinformation campaigns that grew from it.  Now this has been further ramped up by social media.

The good news is that the problems of corruption and crime in health care can now be more easily seen as just part of  larger problems.  The bad news is that this has only come into view as the problems of US and global corruption become profound.  Furthermore, as we think about more corruption, the issue seems much more complex.  At least conferences like the 18th IACC provided a venue to being to address the complexity before we are totally overwhelmed.

NOTE (Oct 29, 2018) -  Discussion section revised and enlarged to include the three themes above.