We at Health Care Renewal miss Dr Bernard Carroll, who we were proud to count among our bloggers. 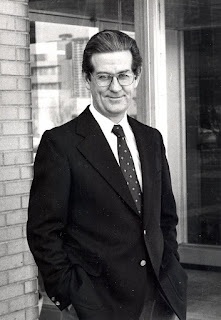 The New York Times just published a kind obituary, which called him "the conscience of psychiatry."

Dr. Bernard J. Carroll, whose studies of severe depression gave psychiatry the closest thing it has to a 'blood test' for a mental disorder, and who later became one of the field’s most relentless critics, helping to expose pervasive corruption in academic research, died on Sept. 10 at his home in Carmel, Calif. He was 77.


It described how he started his "second career":

He and a lifelong friend, Dr. Robert Rubin, a professor of psychiatry at the University of California, Los Angeles, dissected psychiatric studies as they appeared, flagging sloppy work and sniffing out conflicts of interest. They then broadcast their findings to former colleagues and allies through various email lists, often taking their findings to the news media.

'He never stopped; he was up at all hours,' said Dr. Allen Frances, a former Duke colleague. 'I mean, I’m an early riser. I’d get up and there’d be a bunch of emails from Barney.'

In the 2000s, Dr. Carroll and Dr. Rubin worked with Paul Thacker, then a staffer for Senator Charles Grassley of Iowa, to help expose huge undeclared payments to top academic researchers at Harvard, Emory University and other institutions. He knew very well how this world operates; he had consulted widely with drug makers himself.

Dr. Carroll concluded that the psychiatric drug literature had become so polluted as to be virtually meaningless; he called most drug trials “infomercials.”

'We weren’t after anyone, nor did we care how much money people were making — we were concerned about how corrupt the science had become,' Dr. Rubin said in a phone interview. 'The tragedy in all this was that the corrupt science was affecting countless people’s lives.'

Dr. Carroll’s work ethic and vast connections helped convert many younger researchers to his cause; they now view the published psychiatric science with his skeptical eye.

'He was the conscience of psychiatry,' Dr. Frances said, 'and he spawned a generation of future consciences along the way.'

He worked until the end, Sylvia Carroll said, finishing a last paper and, as ever, expanding his electronic presence. His email lists were active; he had started tweeting (he was terrible at it, Dr. Frances said); and he contributed to various blogs, including Margaret Soltan’s 'University Diaries,' for which he sometimes wrote limericks under the name Adam, like this one:

And then we have just across campus

To increase their cash pile

Once grant funds are safe in their clampers.


Dr Carroll was  was with us at Health Care Renewal since 2005, contributing insightful, pithy, provocative and important posts.  He also authored some of our most widely read posts.  Most viewed was: JAMA Jumps the Shark.   His most recent post was Corruption of Clinical Trials Report: A Proposal.   All his posts can be found here. We all miss him.