The Politicization of Pharma, and Other Health Care Corporations - Walk on the Dark (Money) Side

As we noted recently, large health corporations, which deal with patients, health professionals, and government regulators, usually profess their social resonsibility.  For example,

As a health care leader, we believe that our corporate responsibility starts with helping people live healthier lives. And that means using our resources to make the communities and world we live in better places.

Our social responsibility efforts encompass how we treat our employees, improve the lives of customers, and effect positive change in community health.

Corporate responsibility is at the heart of our company's mission to discover, develop and provide innovative products and services that save and improve lives. It underscores our commitment to developing and rewarding our employees, protecting the environment, and operating with the highest standards of ethics and transparency.


Of course, in the policy arena, large health care corporations also tend to advocate for policies that are to their financial advantage.  Furthermore, top executives of large corporations have been known to donate to political candidates who favor their policy positions, although they often seemed to consciously spread their donations out to avoid any appearance of partisanship. 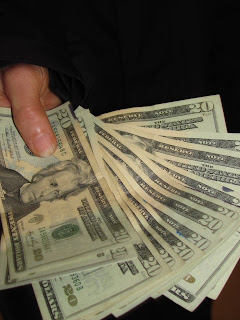 Dark money is meant to be secret, of course.  So it is not easy to find anything out about who gives to dark money organizations, and to whom they give in turn.
However, recently Issue One produced a report entitled "Dark Money Illuminated." It was based on an extensive attempt to pierce the veil hiding dark money. Its introduction states:

Dark money groups hold enormous sway over what issues are, and are not, debated in Congress and on the campaign trail. But the donors behind these groups rarely discuss their motivations for bankrolling these efforts, leaving the public in the dark about who funds these increasingly prominent and potent organizations.


To attempt to get the most accurate picture of the scope of dark money influence on US politics, its authors:

to be able to identify transactions — and donors — that have never previously been associated with these dark money groups.

Perusal of the whole data base revealed significant donations by many more health care corporations (list below includes the three companies listed above).

Abbott Laboratories  - $500K to US Chamber of Commerce (USCC)

Where Does the Money Go?

As is evident above, health care companies donated to a limited number of the big 15 dark money organizations, the American Action Network, Americans for Tax Reform, Patriot Majority USA, but mostly the US Chamber of Commerce.

The first two organizations were all identified by Issue One as affiliated with right-wing / Republican/ pro-Trump causes.

the American Action Network was not publicly rolled out by high-profile Republicans until February 2010 — one month after the U.S. Supreme Court’s Citizens United decision.

Originally founded in July 1985 to promote President Ronald Reagan’s proposal for tax reform, Americans for Tax Reform remains a powerful lobbying organization today that also frequently spends money in elections to aid Republican candidates. The group’s founder and president is Grover Norquist, a conservative activist who once boasted that his goal was to get government 'down to the size where we can drown it in the bathtub.'

In 1994, Norquist was one of the co-authors of the 'Contract with America,' the campaign platform that helped the GOP win control of the U.S. House of Representatives for the first time in more than forty years and helped elevate Rep. Newt Gingrich (R-GA), another co-author, to the position of Speaker of the House.

Americans for Tax Reform’s primary advocacy tool is its 'Taxpayer Protection Pledge,' which asks politicians at the local, state and national level to “make a written commitment to oppose any and all tax increases.”


The third group, to which only one donor gave only $5K, was identified with Democratic / left-wing causes.


The fourth organization, the one to which most of the health care corporate donors gave the most money, is in a class of its own.  The Issue One description of it was

US Chamber of Commerce

the U.S. Chamber of Commerce ranks as one of the nation’s largest and most powerful lobbying groups, with an ornate headquarters in Washington, D.C., just a block from the White House.

A trade association organized under Section 501(c)(6) of the tax code, the U.S. Chamber of Commerce mostly endorses Republican candidates, although it occasionally supports business-friendly Democrats. The group says it represents more than 3 million businesses across the country and has a membership of approximately 300,000.


The USCC has received much - probably unwanted - publicity about its efforts to help President Trump's controversial nomination of Brett Kavanaugh to the Supreme Court.  An October 4, 2018, article in the Intercept included:

Business groups with interests before the U.S. Supreme Court have orchestrated a multifaceted campaign to pressure the Senate to swiftly confirm Judge Brett Kavanaugh to the nation’s highest court. The advocacy reaches across the influence economy of Washington, D.C., with the largest corporate lobbying groups and billionaires working in concert with Republican operatives to elevate Kavanaugh to a lifetime posting atop the judiciary.

Few businesses, however, have stamped their names on the effort. Most major corporations and wealthy donors are instead using 501(c) nonprofit groups that do not require donor transparency to air upward of $15 million in reported advertising spending in order to convince the public to support Kavanaugh’s nomination. Other conservative groups contributing to the ad war have not disclosed how much they are spending, likely bringing the total much higher.

Among the groups publicly campaigning for Kavanaugh to be confirmed are the giants of pro-business lobbying — organizations like the U.S. Chamber of Commerce and the Koch brothers-funded Americans for Prosperity. Lesser-known, business-funded political groups, such as the Republican Attorneys General Association, are also spearheading campaigns.

This is now the fourth time we have discussed the role of dark money in health care.  In 2012 we discussed a case of "dark money" being used to conceal sources of support for particular health policy and political positions.  Earlier this year,  we discussed the case of huge pharmacy chain CVS,which proclaims its "social responsibility," and its policy of only making charitable contributions to improve "health and healthcare nationwide."  Yet CVS was donating to America First Policies, a supposed non-profit group devoted to promoting the partisan agenda of President Trump, including "repealing and replacing Obamacare," and immigration policies such as building the "wall" and deporting  "illegal immigrants." (Note that these CVS dark money contributions were separate from those discussed above.)  Ten days ago we discussed how the pharmaceutical trade organization, PhRMA, and some large drug companies donated money to a dark money organization to combat a state initiative to limit pharmaceutical prices, but also to the American Action Network (see above) to "repeal and replace" the Affordable Care Act (ACA, "Obamacare") despite their previous support for and then current neutrality on the ACA.

Now it appears that health care corporations often donate large amounts to dark money organizations, and as best as we can tell now, nearly all the donations and all the money go to organizations that support right-wing/ Republican/ and now pro-Trump causes.  Many of these causes seem to openly conflict with the corporations' promises of social responsibility.  The slanting of these efforts towards one end of the political spectrum, one party, and now the current president suggest that these corporations may have partisan agendas.

I hope that such investigations continue.

It is not obvious why it would want to consistenly support actions by one party, or by people at one end of the political spectrum.

The obvious hypothesis is that these donations, which must be orchestrated by top corporate management, and which are not disclosed to employees or smaller corporate shareholders, are likely made to support the top managers' self interest.

Musical interlude: "On the Dark Side," Eddie and the Cruisers