Complacency and Healthcare IT: Who is Taken More Seriously on Risk, A CMIO or A Public Transit Authority Doctor?

In this post I make a very shameful comparison. Shameful to the healthcare industry, that is, and coming from an unusual perspective due to my diverse professional background.

Without being specific I can say from first hand information that this is not an isolated incident... the horrific experience is unfortunately in my direct experience typical.

... As you know, I’ve been in the HIT business, advocating for full integration of computing into clinical care, for more than three decades. The upshot, though, is that this country’s hospitals are not ready for wholesale automation of even the most rudimentary kind (such as using barcodes in clinical settings), much less a real EMR. I’d give it another 10-15 years ... before even considering advocacy for much in the way of EMRs. Not that there are EMRs we should advocate for now, in any case.

This hits home, I hope this gentleman keeps telling his story. He is one of the lucky ones that "lived to tell". These are the stories no one believes until it happens to them or a loved one ... He would be saving lives if he talks. I know the retaliation is hard to swallow. I lost my job, but walked out with dignity because I know that I did the right thing. This was such a traumatic event for him and he was one of the lucky ones who were coherent enough to know that something was wrong.

My colleagues are afraid of giving specifics largely due to fear of reprisal from their healthcare and health IT employers. Health IT chaos, though, is clearly more widespread than commonly reported.

Yet in the U.S. in 2009 we find ourselves poised to rapidly spend $20 billion, more than the annual budget of NASA (at $18.7 billion), on these unproven technologies.

Now, a little history from my heterogeneous past:

After a 1990 subway accident in Philadelphia that killed several people and injured hundreds, at a time when I was Medical Programs Manager [of preventive programs] and Medical Review Officer for the regional transit authority SEPTA (pre-informatics), I became sensitized to the potential outcomes of complacency. As I wrote here, some of the the factors contributing to the accident involved complacency and the ignoring of medical advice by non medical personnel.

Yet, the National Transportation Safety Board (NTSB) came in and investigated thoroughly. Improvements were made.

Has something similar ever occurred after an HIT failure?

It always puzzled me why my concerns about health IT problems, dating from my time as a hospital-based Chief Medical Informatics Officer (CMIO) in the 1990's, seemed to raise little concern among the IT and hospital administration and even among some of the hospital physicians themselves. It still puzzles me why my colleagues in active CMIO roles report the same problems in 2009.

It concerns me greatly that HIT is entirely unregulated as its devices become far more complex, and more intrusive in the "biochemical pathways-like" organizational complexities of healthcare. It concerns me that HIT vendors have the best environment of any healthcare vendor: freedom from liability and accountability, and freedom from defect disclosure. It concerns me that hospital executives have agreed to such terms, I believe violating both their Joint Commission safety standards obligations and their fiduciary responsibilities.

As a hospital CMIO observing profound HIT difficulties, it was as if I was supposed to simply acquiesce to the chaos in a medical ICU, in a cardiac catheterization lab, medical clinics, etc. caused by HIT design and implementation deficiencies. It was as if the reaction to my detailed accounts of issues putting patients at risk was that I was simply not a 'team player.' The complacency was palpable. The behaviors consistent with a belief that the IT personnel were wizards, exempt from the scrutiny afforded to mere mortals, was equally palpable.

It was jarring and bizarre. In fact, being a CMIO was more jarring than my earlier physician role in the Philadelphia transit authority, where I sometimes had to deal with very troubled vehicle operators with substance abuse problems and aggressive, sometimes abusive and very scary Philly union officials.

As an example of what I dealt with in that environment, I scanned a 1988 SEPTA transport workers union newsletter whose cover shows a drawing of an injured employee on crutches and a Donald Duck figure with a stethoscope representing the Medical Department physicians, holding a note telling the ostensibly crippled employee to return to work. The newsletter cover is at this link (jpg) and below. 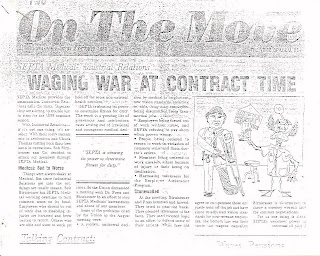 Note the text about the medical department and the duck cartoon on the right depicting the doctors ("quack, quack").

In retrospect, I felt far less uncomfortable as a physician in the mass transit environment than I did as a CMIO at a major hospital. I did not expect much in the way of rigor and science from a transit agency and transit union leaders.

Remarkably, though, I also never feared retaliation or being fired for pointing out potential safety problems. Doing so, in fact, was taken quite seriously, by the Medical Director, the GM's office, Industrial Relations, the system Safety Officer, even the unions when presented the cold, hard facts. Never as Medical Programs Manager and Medical Review Officer was I ignored, as I was as a hospital CMIO.

I felt less comfortable as a hospital CMIO than in the mass transit authority, as I expected a lot more from hospital leadership ... and still do.

On the other hand, I respected the union leaders' directness and unabashed defense of their membership.

Physicians can learn something from them in regards to defense of patient care, and defense of their own profession.

My writing style has, in part, certainly been informed by past interactions with TWU, UTU, BLET, BRS and other transit union leaders and members.

Although the causality of this terrible accident just one day after my post above is yet to be determined, I am often reminded of the public safety aspects of my prior line of work in ensuring fitness for duty of public servants in safety sensitive roles:

Milton Boneta cheated death seven months ago when he was struck by a SEPTA bus in his wheelchair at 8th Street and Girard Avenue. Fate revisited him in cruel fashion at the same intersection yesterday. This time, he was not as lucky.

Police said the Route 47 bus crushed Boneta, 61, as he crossed 8th Street in his motorized wheelchair at about 4:15 p.m. Based on the reactions of witnesses and the grisly scene, there was no chance he could have survived this accident ...

"The operator told me to check for a pulse or to see if he was breathing," [a witness] said, adding that his body clearly was too badly mangled for any lifesaving efforts.

Remembering what I used to do in public transit vs. the inability to perform a similar function as a CMIO in hospitals brings into focus the absurdity of allowing IT personnel to have a veto on issues that concern patient care and safety. (As the head of the Division of Biostatistics and Bioinformatics of a major medical center who had his staff review my HIT site recently wrote me, he "could not imagine any reasonable individual" - i.e., hospital executive - allowing that situation to occur, and found it "downright scary.")

Hospitals can cover up and bury their mistakes, especially when related to the relatively esoteric issues of HIT dysfunction, so perhaps their attitudes can be more cavalier than in the transit industry.