Everyone's An Expert in Healthcare and Health IT? (PARODY WARNING)

(Note: be aware the "story" about Amazon.com below is a parody.)
At "Informatics, or Infomagic? Health IT Cannot Flourish When Everybody is an Expert" I lamented that those lacking biomedical and healthcare informatics experience were growing bolder in their cross-occupational invasion of medicine, and were deluded about their own lack of knowledge in a very specialized domain. The IT specialties appear the most intrusive, followed by anyone who's made money with computers.

I've written many times on a critical first principle: health IT applications are medical devices for complex clinical environments that happen to involve computers. However, consistent with the diminution of critical thinking skills that bought us our currently economically and culturally depressed society, the prevailing model of health IT is that they are management information systems that happen to involve doctors and nurses.

This latter belief manifests itself frequently in the news, and will only increase thanks to the $20+ billion to be thrown at the problem via the ARRA. This is more than the annual budget of NASA (which, ironically, if forced to retire the Space Shuttle without a replacement project of equal scope, will idle tens of thousands of aerospace professionals whose innovations have profoundly influenced miracles of modern technology - including computers).

An example of cross occupational boundary confusion is below, where it is seemingly wished by a hospital CIO that an online merchant selling "electronics, apparel, computers, book, DVD's & more" would become involved and offer deep insights into medical devices and the needs of clinicians.

Written as a spoof or parody (which, I am sorry to admit I originally thought was real), is this apparently fictional tale of Amazon's Jeff Bezos joining the EHR bandwagon:

The spoof was revealed by this sentence in the middle of the essay:

The Amazon story is a spoof, though I wish it weren't. :-)

I understand the intentions, but that fact might have been made a bit more obvious. I was fooled on first read. (In fact, I first believed the author was pointing out weaknesses with this scheme.) Such web based stories, especially with names of prominent people and companies, can propagate internationally via seach engines, automated aggregators, finance boards and other services and mislead. Further, those who are not native English speakers or who read it in computerized translation might also be misled. Et cetera. We have enough rumors on the internet, thank you very much. And yes, perhaps I'm being oversensitive after being taken in.

That said, and while I am laughing at myself for being fooled, at the content I am not laughing. To the original author of the spoof, a CIO at a prominent hospital system and data warehousing expert (but not a clinician), I would ask the following:

Do physicians need more variation in the presentation of information and the user interfaces they deal with, or less?

You opine that you wish Mr. Bezos joins Google's PHR experts, Intel's Craig Barrett and others in espousing what's best for a field in which they are amateurs. Why?

Don't we hear enough stories like this that could benefit from more highly domain specific expertise, not less?

Here's my humor for the evening:

When first principles are ignored, anybody is a medical expert and can inform the design of medical devices. Next, will you wish Crazy Drinking Straw company will offer wisdom on catheters used in angiography, and M&M Mars will offer profound insights into the manufacture of medicinal pills? (After all, M&M's and pills are very similar, so why not?) 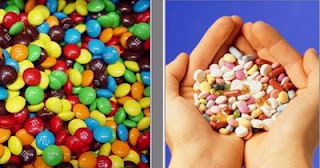 M&M's and pills are very similar in many ways.
Perhaps Mars Candy Co. should go into the generics business?

However, my stating in detail why I see an "Amazon EHR" to be as strange as the examples above and why I believe the parody author's logic is flawed would likely be ill received, so I'll leave it at that.

My most fervent wish is that business folks would stick to selling books and chotchkas, designing microprocessors, and other goods and services where their expertise is valid.

And others stop "wishing" for cybernetic miracles by the unqualified.

Finally, my apologies to Mr. Bezos for an initial version of this post attributing the parody's ideas to him.