A Most Interesting Patient Account of Misery by EHR

As I have written many times, health IT can achieve many of its touted benefits, but only if done well. "Done well" is not as easy at it might seem in the complex world of healthcare.

I am providing a link to a fascinating story by a patient, Joe Bugajski, who is a professional in enterprise architecture, data access strategies, application engineering, information integration and quality, technology standards, and other related domains, with impressive big-industry expertise.

The story is here:

It is worth reading in its entirety. It illustrates many of the points I've made on HC Renewal about healthcare IT difficulties in the real world (as opposed to the Bernie Madoff world of "unlimited returns, no matter what.")

Here is an excerpt:

... Medical personnel at urgent care and the hospital who interacted with me all used a version of the same electronic health information system (the “system”). It became clear that everyone was fighting that system. Indeed, they wasted between 40% and 60% of their time making the system do something useful for them. The system kept everyone from fulfilling their duties - the health information system did not help medical professionals perform their duties.

Since my hospital stay, I confirmed that electronic health information systems are mostly broken. I interviewed medical professionals, healthcare IT experts, and my allergist. They confirmed my sickbed analysis. Indeed, several experts said that they longed for handwritten charts once more hanging from the foot of every patient’s bed. (Again, please read Prof. Dr. Armstrong-Coben’s Op-Ed article.) My analysis argues for careful analysis of strengths, weaknesses, opportunities, and threats (SWOT) associated with building a national health information network. If the nation simply accepts the President’s vision while healthcare IT vendors collect some of the $20 billion stimulus bounty, individuals and businesses will pay higher medical costs, patients will receive inferior care, and medical professionals will lose precious time fighting IT systems instead of delivering better care.

A SWOT analysis is a good idea. Unfortunately, such an analysis is difficult in face of HIT contractual gag clauses, lack of cross-institutional knowledge sharing, and a societal meme that "health IT is all plug and play goodness and apple pie, always and forever" that got inserted into the national psyche.

This meme somehow short-circuited the critical approaches necessary towards perfecting and proving an experimental technology (which was how many if not most informatics professionals viewed HIT when I started my fellowship in the early 1990's). I believe this meme arose and was propagated largely through efforts of the marketing arms of vendors, trade associations and pundits.

I agree with Mr. Bugajski's conclusions, which parallel my own writings over the past few years:

A national health information network, while a laudable vision, will require massive data integration engineering at a scale never before undertaken by the IT industry ... Mr. President, don’t be fooled by IT vendors telling (false) tales of munificent and magnificent skills with their heath information system development. Rather, ask them to depart immediately. Instead call upon our nation’s best system and data architects to report for duty. [As I've noted over the years, Medical Informatics experts have that expertise with respect to HIT - ed.]

... The national health information network envisioned by President Barak Obama is a pipedream. That is, unless and until information technology (IT) professionals [ideally with leadership and input from Medical Informatics professionals --ed.] learn how to build systems and data models that meet end-user requirements (read, useful to medical professionals). My recent experience with an urgent care clinic and a major tertiary care hospital convinced me that the United States will require a long time before there is a consistent data model capable of recording a patient’s health information, let alone a data model capable of accurately and reliably transmitting that information from one healthcare institution to another. Much of the groundwork required to achieve the vision needs to be done. The $20 billion allocated by the American Recovery and Reinvestment Act for a health information network will be squandered by IT vendors and hospital administrators [as I opined in my recent WSJ letter to the editor - ed.] long before the nation has a viable network unless and until the administration acts rationally to establish a program of development that is free of vendor and administrative greed. Take it from a guy who recently found breathing very difficult, do not hold your breath waiting for a national health information network to appear.

I fear (from over a decades' experience), unfortunately, that due to arrogance, greed, irrational exuberance, inappropriate overconfidence in computing, and other forms of stupidity, many in HIT and government will receive these well-engineered words no differently than as depicted in this medieval illustration: 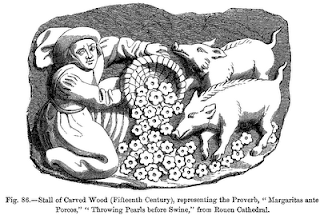 Email ThisBlogThis!Share to TwitterShare to FacebookShare to Pinterest
Labels: Healthcare IT failure