Electronic medication prescribing: The Magic Bullet Theory of IT-Enabled Transformation once again bites the dust in the real world of medicine

As many as 12 percent of the drug prescriptions sent electronically to pharmacies contain errors, a rate that matches handwritten orders for medicine from physicians, researchers said.

An analysis of 3,850 computer-generated prescriptions written over a four-week period found 452 contained errors, including 163 that could harm the patient, according to a report published today in the Journal of the American Medical Informatics Association. The rate was consistent with past studies reviewing the risk of errors when a doctor writes a prescription and hands it to the patient, the researchers said.

Pens and prescription pads are orders of magnitude less expensive than multimillion dollar computer systems, I might add.

The results undermine the expected safety benefits from computer-generated prescriptions, said the study authors led by Karen Nanji of Massachusetts General Hospital’s anesthesia, critical care and pain department. The U.S. paid more than $158.3 million to doctors and hospitals in the first half of 2011 to encourage adoption of electronic health records, which President Barack Obama has advocated as a way to lower health- care costs and reduce medical errors.

"Expected benefits?" Expected under what assumptions? [The assumptions that computers are a 'magic bullet' of some sort for complex real-world problems, and that technological determinism applies, are my best guesses as to the major ones - ed.]

“Providers appear to be rapidly adopting electronic health records and computerized prescribing, and one of the major anticipated benefits is expected to be through medication-error reduction,” the researchers wrote. “Many of these benefits will not be realized if the electronic prescribing applications are not mature and either do not catch or even cause new medication errors.”

If health IT are indeed medical devices (as per CDRH Director Shuren, see this link) but they are "not mature", then why are they on the market without pre-marketing validation, post-marketing surveillance and other regulatory requirements faced by other medical devices?

“With more than 3 billon prescriptions written annually in the U.S. alone, this could amount to 385 million errors each year, with 128 million of them having the potential to cause patient harm, said researcher Jeffrey Rothschild, from the center for patient safety research and practice at Brigham and Women’s Hospital in Boston.

If the technology is this unreliable at this time, then perhaps investing hundreds of billions of dollars in it in 2011 is premature?

Feeling a bit like Harry Markopolos once again, I offer what I am going to call Healthcare Renewal's Rule #1 of Cybernetic Common Sense in Medicine:

"Computers can only solve problems amenable to be being solved by computers, and only when all steps in their design and implementation are led by bona fide, domain-experienced, competent problem solvers."

This will not happen in the Wild-West health IT ecosystem that currently exists. 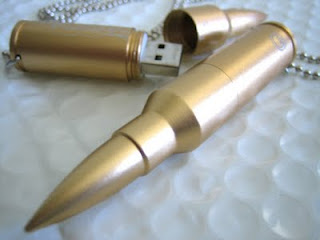 USB-equipped Magic Bullets. Click to enlarge.
I have been asked what is needed for this industry to mature.

As previously mentioned, Jeff Shuren MD JD of FDA's Center for Device & Radiological Health (CDRH), a physician and a lawyer, called health IT a "medical device". On Feb. 25 2010 he stated:

... Under the Federal, Food, Drug, and Cosmetic Act, [that regulates all drug, medical devices, etc. in the United States -ed.] HIT software is a medical device.

Currently, the FDA mandates that manufacturers of other types of software devices comply with the laws and regulations that apply to more traditional medical device firms. These products include devices that contain one or more software components, parts, or accessories (such as electrocardiographic (ECG) systems used to monitor patient activity), as well as devices that are composed solely of software (such as laboratory information management systems).

See links to his quotes at my post at http://hcrenewal.blogspot.com/2011/04/fda-decides-regulating-implantable.html
Treating "HIT software" as such - as a medical device - with all that implies, would be a first step. Instead - for whatever political reasons - HIT is given special accommodation.
We could do the reverse to achieve regulatory consistency as well. What about de-regulating other medical devices and drugs? Might that not work out well?

There's a critical, infrequently addressed issue that arises as IT capabilities advance.

HIT is much more than a medical device like a stent or defibrillator, since it increasingly acts as a "coach" in the sports meaning of the term, or a "conductor" of clinicians in the sense of, say, a Herbert von Karajan or Eugene Ormandy as conductor of musicians.
The computer increasingly calls the shots, so it in effect is increasingly a cybernetic intermediary or "proxy" between doctor and patient. (In essence, the "learned intermediary" metaphor is obsolete; for instance when a doctor fired up some expert system, posed a question about what antibiotic to best use, and then either used or ignored the outputs. The computer is now between doctor and patient.)

Here are tragic, if accurate, allegations of a computer in control of clinicians: the child death lawsuit complaint #2 at my post "Babies' deaths spotlight safety risks linked to computerized systems" at http://hcrenewal.blogspot.com/2011/06/babys-death-spotlights-safety-risks.html :

Count 42: Defendants told Plaintiffs that the incorrect date on the image caused the x-ray not to be read by a radiologist in the night the image was taken, and that if the image had been correctly dated February 27, 2010, it would have been reviewed by a radiologist immediately, who would have alerted Defendants that the PICC line was improperly positioned and had to be moved back to a safe position. However, since the film was incorrectly dated February 23, 2010, the film was classified as “old” [BY THE COMPUTER PROGRAM - ed.] and was not put in line for immediate review [BY THE COMPUTER PROGRAM - ed.], and was not reviewed in time to prevent injury to Plaintiffs Decedent.

Count 45: Defendants told Plaintiff that the x-ray from the 27th, which was mislabeled as being from the 23rd, would have been reviewed by the neonatologist on duty on the morning of the 28th, but this did not happen because the computer which places films in line to be reviewed would have ignored such an “old” film. [That is, the computer cybernetically made the decision that the radiologists need not read the film, and in doing so exerted deadly interference with the clinicians' work - ed.]

If a machine is to be given this kind of authority, i.e., as a conductor or governor of clinicians, its competence to do so needs to be extensively and robustly validated.
A neurosurgeon doesn't cut into someone's head before their skills in that regard have been extensively validated.

Why do cybernetic intermediaries get special regulatory accommodation, especially when evidence is increasingly mounting that, as of 2011, they are often deficient?

Posted by InformaticsMD at 1:28 PM

As expected, a waste of hard earned money. This one is shovel ready...dung.