Health IT: Ddulites and Irrational Exuberance

The title is not a typo.

I've often tried to explain the phenomenon of irrational exuberance where computers are concerned, especially in the domain of health IT.

In face of the literature references provided throughout this blog, including at posts such as this reading list and at sites such as here, one would think rational people would temper their exuberance somewhat, at the very least towards rapid national rollouts - as opposed to constrained, controlled experiments until the industry learns how to get the technology "right."

However, more than a decade of writing has had little effect.

I've also attempted to explain the phenomenon of irrational exuberance on a belief in technological determinism, on industry propaganda, on unquestioning IT faith being a quasi-"religion", and on profiteering or other quid pro quo. (The latter, I'm certain, is operative to an extent.)

I have now come across a term, though, that I believe accurately encapsulates the phenomenon of unquestioning beliefs that health IT + clinician automagically --> a "revolution" in medicine.

It may be a character trait. The trait has been described by the term "Ddulite." (Pronounced, I would say, 'da-dew-light'.) It is obviously a play on "Luddite" with the fist four characters backwards.

Apart from its historical meaning, a Luddite is "one who is opposed to change, especially technological change" (Merriam-Webster).

A Ddulite, on the other hand, is the opposite of a Luddite. A Ddulite is:


A person with a preference for higher tech solutions even in cases where lower tech alternatives have greater and more appropriate functionality.


My own definition, especially in healthcare:


Hyper-enthusiastic technophiles who either deliberately ignore or are blinded to technology's downsides, ethical issues, and repeated local and mass failures. [1]


Such people ignore the downsides, even if the downsides are deadly - in which case I believe it justified to describe Ddulites as "radical technophiles."

In other words, irrational exuberance in IT in general, and HIT specifically, is not merely a belief, it's a character trait, perhaps an ideology.

That could help explain why some otherwise very bright people, even people who promote evidence-based medical practice, seem to become blind and deaf in regard to HIT, as in the recent comment thread on my post "KevinMD: How algorithm driven medicine can affect (make more dangerous, actually) patient care."

When it comes to evidence-based IT practice, a Ddulite is eager to provide extraordinary special accommodation towards IT flaws, ethics, known dangers, etc. Someone of this ideology finds it exceptionally easy to dismiss or ignore any and all evidence that could contradict the technology's powers to "transform" medicine, and perhaps even worse (for patients), that could contradict its infallible beneficence.

Unfortunately, IT is not a magic bullet ... it can be just a bullet, period, unless "done well", an undertaking of almost wicked complexity.

In medicine, that means applying the rigors of medical research, medical science and medical ethics to the conception, design, implementation and lifecycle of health IT, with all that implies. This is certainly not the state of the HIT enterprise in 2012, which is largely based on a management information systems, i.e. merchant-computing, paradigm.

People who offer unquestioning loyalty to cybernetics, and who reflexively accuse those who are circumspect about commercial health IT of being "Luddites" who proffer "anecdotes", perhaps need to look in the mirror. They then need to think critically as to whether their reflection demonstrates Ddulite characteristics. 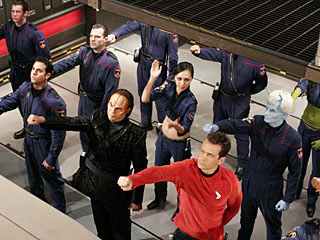 Unquestioning loyalty to the Empire: In A Mirror, Darkly

Also see my post "Health IT Ddulites and Disregard for the Rights of Others" that adds another observation about the Ddulite mindset.

The social media should be harnessed to draw attention to the sham of HIT in its current form;

and to organize the doctors to demand accountability and surveillance of the adverse events, downtime, cognitive mistakes, delays in care, misidentifications, duplicate medications, and flawed decision support which individually or in aggregate, have been known to cause unexpected deaths.

I think we should keep it simple and re-examine the current health IT solutions. Ideally, the technology should be figured out, with all the kinks worked out before a national roll out, but hindsight is 20/20 and I think we are moving in the right direction, despite all the current problems.