HIMSS Annual Meeting in Las Vegas - Fitting for People Who Gamble With People's Lives to Make a Buck?

The setting for the Feb. 2012 annual meeting of HIMSS (the Health Information Management Systems Society, the gargantuan health IT trade group), ongoing as of this writing, is the Venetian Sands Expo Center in Las Vegas, NV.

Judging by the pictures posted at the HisTALK blog here of the event, now ongoing, it seems to be one big, happy party: 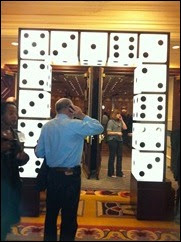 This is ironically apopos for an organization whose leaders beg for special accommodation for a technology they know their industry has not learned how to "do right" after decades of profiteering (at patient's expense), thus gambling with live, unconsenting people as the poker chips:

Barry Chaiken, former HIMSS Chairman of the Board, July 2010 interview: "We’re still learning, in healthcare, about that user interface. We’re still learning about how to put the applications together in a clinical workflow that’s going to be valuable to the patients and to the people who are providing care. Let’s be patient. Let’s give them a chance to figure out the right way to do this. Let’s give the application providers an opportunity to make this better." [While the systems remain in use on live, unconsenting patients - ed.]

It is difficult to imagine such a statement coming from the aviation, nuclear energy or other lives-at-risk industries.

HIMSS 2012 really seems to be a fun party. Even Elvis was in attendance: 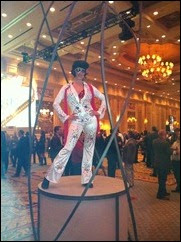 Elvis, a fitting icon for an industry trade show on health IT? Journalist Tony Scherman wrote that by early 1977, "Elvis Presley had become a grotesque caricature of his sleek, energetic former self. Hugely overweight, his mind dulled by the pharmacopoeia he daily ingested, he was barely able to pull himself through his abbreviated concerts."

Sounds like what the commercial health IT sector has done to the good intentions and well-thought out applications created by the health IT pioneers.

I note that prostitution is legal in Las Vegas as well. This allows making money from objectification of human beings, although at least the latter give consent to the exploitation of their bodies.

What was missing from HIMSS was the ED EHR Slot Machine of Risk. (From my March 2011 post "On an EMR Forensic Evaluation by Professor Jon Patrick from Down Under: More Thoughts.") 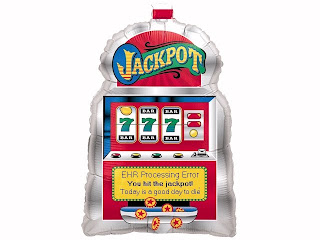 Posted by InformaticsMD at 9:31 AM

This is really heartbreaking. It is as if these shysters are partying on the graves of the patients on whom they experiment. Please keep up the fine job you are doing of exposing these things!

It is as if these shysters are partying on the graves of the patients on whom they experiment.

Especially in face of recent reports by FDA, IOM, NIST, the ECRI Institute and others on HIT's risk, poor usability, etc.. I consider the tone and venue for this extravaganza in extremely bad taste.

Do you have any examples?