True or Not? Death By Deletion, Adventist Health System IT Whistleblower Patricia Moleski Speaks Out

Not sure what to make of this yet: 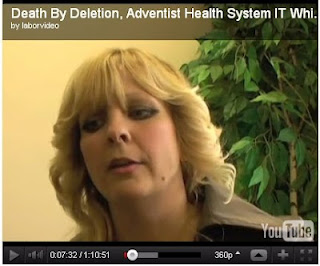 Whistleblower Patricia Moleski speaks out about health IT abuses - play at http://workmancompensationlawyers.net/12/23/death-by-deletion-adventist-health-system-it-whistleblower-patricia-moleski-speaks-out/

A former hospital IT worker claims very deliberate mass spoliation (e.g., deletion) of electronic medical record evidence to limit her (ex)-employer's liability for EHR-related medical malpractice on patients and injured workers who were entitled to workers compensation, as well as EHR defects.

She alleges that IT personnel are used as naïve accomplices to perform the spoliation acts. She grew suspicious when she was asked to delete nursing information about a patient who committed suicide by jumping out a hospital window after an EHR-related drug overdose.

The video is over an hour long and is worth listening to.

She made these claims to the FBI and alleged to have suffered retaliation including firing, and possible terroristic activities directed against her.

A Feb. 2010 letter to Gov. Crist, Sen. Grassley and many other government officials, a 9th Judicial Circuit court document for Orange County, FL (PDF), and other details - some scary - can be found via a google search on this person's name: https://www.google.com/search?q=Patricia%20Moleski . 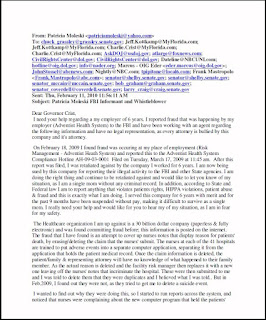 This could be the "Libby Zion" (or Bernard Madoff?) case of the health IT world if these allegations are true.

Having had recent personal experience with a major Health System in action and trying to report what I found to every federal and state agency I could think of, I believe every word of this. You report and you get ignored or spit on.

You report and you get ignored or spit on.

I have been writing on HIT problems for over a decade, and with a few exceptions, that's been my reception, even from within the medical community.

This is another example of the widespread corruption in the hospital-HIT vendor axis.

Welcome to HCR. You will find a large number of well educated, and people with personal experience, sharing your experience.

Don't I wish it were just ignored or spit on.

Need to contact Patricia or anyone else about this. Its still going on..more victims.