For Whom the Door Revolves: Founder and Director of Multiple Biotechnology Companies Became Director of the NCI and Now Nominated to be Acting Commissioner of the FDA

Dr Scott Gottlieb, the first commissioner of the US Food and Drug Administration (FDA) appointed by President Trump, has announced his plans to depart.  At the time of his nomination, Dr Gottlieb's many conflicts of interest were well known (see this NY Times article, for example), as were his exceedingly friendly views of the pharmaceutical/ biotechnology industry (see this long ago post, for example).

As StatNews just reported, Sharpless "founded two biotech companies."  His fans cited as proof of the "breadth of his experience,"

the $105 million that G1 Therapeutics, a company Sharpless co-founded, raised in 2017 while developing the lung and breast cancer drug trilaciclib.


Apparently, his work in industry has made Dr Sharpless rich

According to public records, founding these companies may have paid off.  Sharpless reported selling more than 400,000 shares of G1 Therapeutics in October 2017 - which, at the time, were worth more than $9 million.

So far, I have seen no other recent reporting that goes into any detail about Dr Sharpless' connections to the pharmaceutical and biotechnology industry.  Nor did I see much reporting about these relationships from the time Dr Sharpless was appointed to head the National Cancer Institute in October, 2017, again by the Trump regime.

A little digging provided a bit more detail about his relationship to G1 Therapeutics.Crunchbase revealed that Dr Sharpless was a Co-Founder of G1 Therapeutics, a member of its Scientific Advisory Board, and a member of its board of directors.  A  press release from the UNC Lineberger Comprehensive Cancer Center did gush a bit about his ability to raise capital for G1 Therapeutics in May, 2017, a few months before he was appointed to head the NCI.

G1 Therapeutics, Inc., a clinical-stage oncology company in Research Triangle Park with ties to the University of North Carolina Lineberger Comprehensive Cancer Center, has raised approximately $108.6 million in an initial public offering of its stock. The company began trading on the NASDAQ Global Market under the ticker symbol 'GTHX' on May 17.

Founded in 2008 with support from KickStart Venture Services, a UNC-Chapel Hill program that works to turn University research into new companies, G1 is developing novel therapeutics based on discoveries made by UNC Lineberger Director Norman E. Sharpless, MD, and Kwok-Kin Wong, MD, PhD, then at Dana-Farber Cancer Institute and now at the Perlmutter Cancer Center, NYU Langone Medical Center. The early research that led to the formation of G1 was supported by the University Cancer Research Fund.

It was an advance in raising capital, although the eventual clinical value of the venture may not yet be clear.  Trilaciclib is apparently still under development and has not been yet subject to big randomized clinical trials.

The second company that Sharpless-directed science helped spawn is Sapere Bio, also based in North Carolina

developing a diagnostic text to measure a patient's 'molecular age.'

whatever that may be, and whatever use it may turn out to have, or not.


There is not much more information about Dr Sharpless' relationship with Sapere Bio.  In February, 2019, the WRAL Tech Wire stated,

Physician Norman 'Ned' Sharpless and Natalia Mitin, Ph.D., founded Sapere Bio in 2013. It was originally called HealthSpan Diagnostics, a reference to the period in your life when you’re healthy. The company grew out of the research of Sharpless, who at the time was director of the Lineberger Cancer Center at the University of North Carolina at Chapel Hill.


Apparently, by the time this article was written, he was "no longer involved" with the company.


Consulting and Other Financial Relationships

Further web searching revealed that Dr Sharpless had to disclose other financial relationships with health care corporations in the past.  In 2017, he was one of multiple authors on a paper in The Oncologist (Patel NM et al. Enhancing next-generation sequencing-guided cancer care through cognitive computing. Oncologist 2017; 22: 1-7.)

Compensation to be an advisor to Unity is solely through an option to purchase up to 50,000 shares of their stock. Roughly half of these options are unvested.

I cannot find anything more about Dr Sharpless' relationship to Unity Biotechnology, which is apparently yet another start-up biotechnology corporation with drugs in the development pipeline.

Again, it appears that Dr Sharpless may have ended these relationships when he became NCI director.  A disclosure in December, 2018, for a talk he gave at the American Society of Hematology included

Dr Norman "Ned" E Sharpless is clearly an experienced academic physician, and hence is a welcome contrast with the many ill-informed ideologues lacking any experience or expertise in biomedical research, medicine, health care or public health recently appointed to important US government health care related positions (for the most recent example, look here).

However, while he held a major academic leadership position, Dr Sharpless had multiple important conflicts of interest, including founding and serving on the boards of directors of several for-profit biotechnology companies, as well as having other financial relationships with health care corporations.  He apparently had already become rich via these relationships before he became director of the US National Cancer Institute (NCI), although he apparently ended the relationships when he assumed the directorship.  As the head of the NCI, he was in a position to have some influence over US health care research policy affecting the pharmaceutical and biotechnology industry.  Hence his appointment to that position was an example of the revolving door. 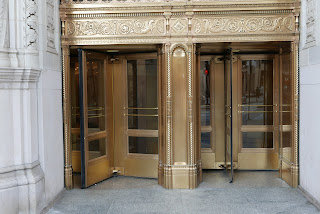 Now about one and one-half year later, his position as acting commissioner of the FDA will give him much more influence over pharma and biotech.  This appointment is an even more strking example of the revolving door.

Both examples seem to have so far gotten lost in the continuing chaos generated by the Trump regime.

Yet, as we have said until blue in the face, and most recently less than a month ago...